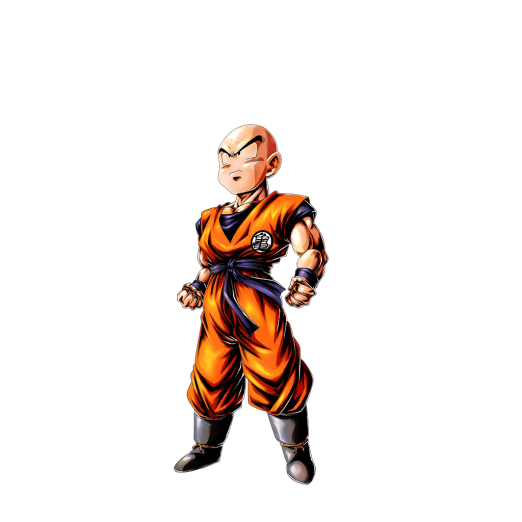 EX Krillin PUR spearheads the under-explored Super Warrior Tag as its strongest Supporter. Krillin boasts fantastic Ki Restore Speed, high personal Damage, decent neutral tools, and an excellent ability to both Heal and Support his allies with Damage Inflicted Buffs when his Health drops below half.

What makes Krillin so potent is his synergy with other Blast-Oriented Super Warrior Fighters like EX Tien GRN and EX Yamcha RED, the two defenders of earth that dropped alongside him.

Another excellent aspect of Krillin's design is his absurd Equip access, ensuring that his strengths are accentuated.

Krillin's overall efficacy might not match up to the strongest Fighters in the meta, but it's hard to excel at as many roles as Krillin does at once. He is an indispensable member of the Super Warrior Tag as it currently exists and if it is fleshed out in the future, it's hard to imagine that Krillin won't be a significant part of its success.

While Krillin is categorized as a Support Fighter, it's impressive how decent his personal Damage is. Thanks to his first unique ability, he enters the field with 60% total Inflicted Damage and 60% Ki Restore Speed with 3 Super Warrior or Purple allies alive, letting him easily circumvent the large base cost of Blast Arts, his primary mode of attack, through charge step.

With both his Main Ability and his Health-contingent Support Ability, he can Buff the Damage of all Super Warriors and Purple Fighters with 30% Inflicted Damage, the latter granting that buff Permanently, and the former granting that Buff for an astoundingly long 60 Timer Counts. All together, Krillin is capable of dishing out staggering amounts of damage with all of these effects active.

A Thorn in the Side of Evil

What makes EX Krillin PUR valuable beyond his own Damage and Damage Support is the little things he can do to annoy his foes while Supporting. His Extra Arts Card, the Solar Flare, is a full range projectile that inflicts Flash, restores 50 Ki, and inflicts its target with a +30 Received Damage Debuff for 10 Timer Counts, making it one of the best disabling Extra Arts in the game.

He doesn't just enhance his Allies with Damage when his Health drops below half, he also heals 25% of their Health and grants a permanent +60% Ki Recovery Buff, an especially potent ability when active in tandem with the Card Draw Speed Buff possessed by EX Yamcha RED.

His Main Ability doesn't just grant Damage Buffs either, it also cancels all ally Debuffs and destroys 3 enemy Dragon Balls, an extremely powerful effect type. Notably, Krillin is the first Fighter to be able to destroy 3 Dragon Balls at once.

Krillin, as a Support Type, requires Allies to be around for his Kit to take off, and that's not just referring to his Team-wide Damage Buffs, it's referring his own personal Damage Buffs too. His Damage Buff upon entering the field scales with the number of living Super Warrior and Purple fighters, so if he's by his lonesome, he's only getting 20% Inflicted Damage and 20% Ki Recovery.

As strong as Krillin's ability to Buff his allies and heal them too when his health drops below 50% is, it doesn't accomplish much with no allies around. Luckily, it does activate even if Krillin is killed, so there's no real reason to shy away from sacrificing him to a Rising Rush if the situation calls for it.

Krillin isn't defensively bankrupt thanks to the multiple 10% Sustained Damage Cut for 10 Timer Counts Buffs that he gives himself upon entering the field, but these too are contingent on having allies around.

EX Krillin PUR is clearly designed for a Super Warrior Team that features him alongside EX Yamcha RED and EX Tien GRN. The three of them are surprisingly strong for a squad of Extreme Rarity Humans, but despite that, they're all capable of serious carnage with Krillin backing them up.

EX Kami Absorbed Piccolo YEL is a decent option here, but his support is limited to Legends Road and Regeneration Allies, Tags none of his strongest Tag contemporaries share.

While this Team might not be the most diverse, it can certainly hold its own. SP Taitans Yamcha PUR is a superb bench choice, as is HE Yamcha YEL, not just because these are the only Fighters that Buff Super Warriors, even though it's mainly that, but also because they give Buffs to defensive Stats that the Team is lacking in on average.

I left Chiaotzu at Roshi's