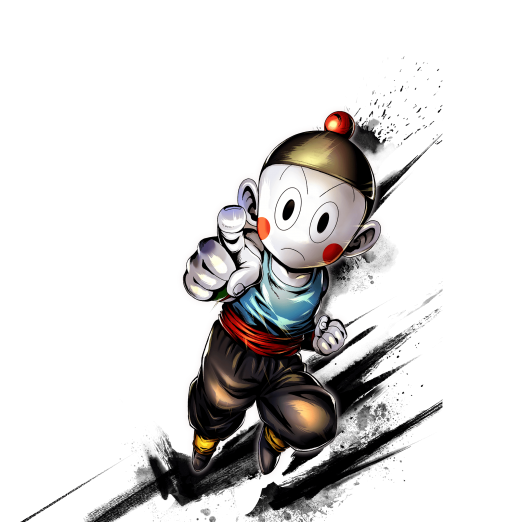 Tien's partner-in-crime, EX Chiaotzu PUR was willing to sacrifice anything to protect his best friend, even himself. This selfless attitude manifested in the Saiyan Saga, when he self-destructed when facing Nappa, in order to save Tien and the others. During the Super Warrior Event, the Legends Team decided to throw the playerbase a bone by pushing this beast with a unique piece of equipment.

In the spirit of source material accuracy, Dragon Ball Legends has decided to base EX Chiaotzu PUR's combat prowess on the potency of Chiaotzu's sacrificial desperation attack on Nappa. That is to say, completely and utterly ineffective. EX Chiaotzu PUR is a Fighter whose design is fundamentally flawed. Every ability of his Buffs the damage of his Self-Destruct, the Awakened Arts Card drawn by his Main Ability that deals Major Damage and kills him in the process.

Putting aside this attack, and the fact that its base Damage is lower than any modern Fighter's Strike or Blast Arts, Chiaotzu's combat offerings outside of his Awakened Arts card are non-existent. Even off the battlefield, Chiaotzu's Z-Ability only enhances Allies' Self-Destruct Damage.

While this Z-Ability is appreciated by all 3 Fighters in the game with Self-Destruction Damage, it isn't enough to give him a shred of relevance in a meta where none of them are viable. The only saving grace of EX Chiaotzu PUR is the low pull rate of Extreme Fighters.

Fortunately for the playerbase in this instance and this instance only, the base pull rate of EX fighters on a standard banner is significantly lower than the pull rate of Featured Sparkings. This ensures that EX Chiaotzu PUR will rarely appear in mutli summons on average.

EX Chiaotzu PUR possesses a great selection of equipment options. Unfortunately, even with all of these pieces of equipment firing on all cylinders, Chiaotzu's Damage and overall effectiveness is laughable.

EX Chiaotzu PUR has no viable Teams, no decent equips, no combat tools, not even a single decent stat. EX Chiaotzu PUR may be the only Fighter in Legends to have no redeemable qualities.

This Meta-breaking Self-Destruct Team fields Chiaotzu alongside the dominant, brutal tyrants SP Majin Vegeta RED and SP Android #16 GRN. Working in tandem, the three of these pyrrhic heroes are quite threatening to the likes of SP SSJ Kid Trunks TEL and SP Taitans Yamcha PUR.

This Team's unparalleled internal synergy can be brought to the next level with incredible Supporters like SP Super Saiyan 2 Vegeta PUR and SP Pikkon RED manning the bench. Though this Tag Team is relatively uncommon now, it's guaranteed to become the undisputed best Team once it starts to catch on.

The Super Warrior Team isn't even a meme anymore, but it's definitely a meme when EX Chiaotzu PUR is used on it. Stick to Krillin, Tien, and Yamcha. Leave this disgrace back at Roshi's and never look back.

Awakened I left Chiaotzu at Roshi's No. １

This Fighter would need a serious balance in order to be viable on the core or bench of any Team.