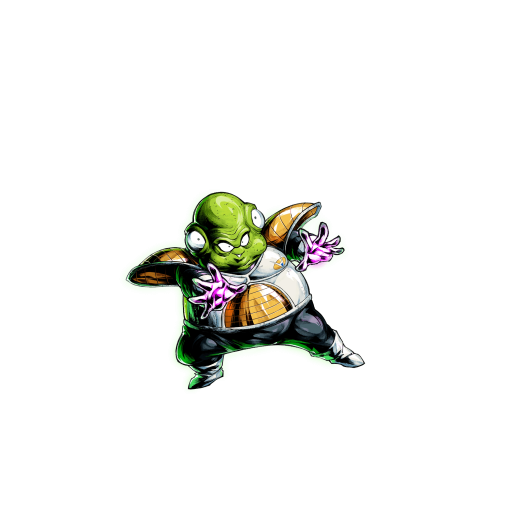 EX Guldo GRN is a free Fighter available to all players willing to grind for him from the Ginyu Force Special event, and though this Ginyu Force member brings notable utility to the table, he isn’t doing much to shake his reputation of being the weakest in combat. EX Guldo GRN is something of a Special Condition specialist, spreading Poison, Paralysis, Substitution Count Increases and the rare Heavy Immobilization.

Unfortunately, aside from this, EX Guldo GRN does little to justify his inclusion on the main core of Frieza Force or Ginyu Force. He does have notable utility as a Bench option, boosting the Health of his comrades from the sidelines. Despite some powerful hidden techniques, EX Guldo GRN fails to find a place in the current Meta, boasting a bad Color for his tags and a confused kit.

EX Guldo GRN is the only Fighter in the game, at the time of his release, that can inflict the Heavy Immobilize status, which keeps an enemy locked down for 5 Timer Counts.

This is an incredible ability, especially considering the Awakened Arts Card that he uses to spread this status is unavoidable, even if the opponent Vanishes it in time. This Main Ability also shortens the Substitution Count of his allies, setting up for a devastating momentum shift in the match.

EX Guldo GRN may not be much to write home about in-combat, but off the battlefield, he provides his Frieza Force allies with a much needed health boost. EX Guldo GRN is slated to be a mainstay of this tag’s bench for some time as a result of this.

While some aspects of his kit are exceptional, he simply cannot fulfill major roles. He cannot deal decent damage, he cannot boost the stats of his allies, he cannot act as a tank, and he cannot heal. He can annoy his foes and help his allies enter the battlefield sooner than otherwise, but despite this, neither of his tags can afford to field him. He’s simply outclassed.

EX Guldo GRN is nowhere to be seen on the main core of Ginyu Force, but he is a mainstay on its bench, providing a significant HP buff to his allies. If the opponent’s team is heavily comprised of Blue Fighters, Guldo can be brought in as a core option, but this should only be considered in extreme cases.

On Frieza Force, EX Guldo GRN’s lot is the same as it is on Ginyu Force. He is unable to be run on its core, but the green gremlin can be run on its bench. He might not be the most exceptional Fighter, but he is far from useless on Frieza Force

Get turned into space dust!

EX Guldo GRN Draws a Special Move Arts Card and is a Ranged Fighter, so this is a must-have as well.

EX Guldo GRN is not very impressive in a Match, but he does carry an almost-guaranteed Heavy Immobilize, a similar effect to inflicting faint. Again, he’s hard to use over SP Golden Frieza GRN, but his Health Z-Ability is a must-have for the bench.