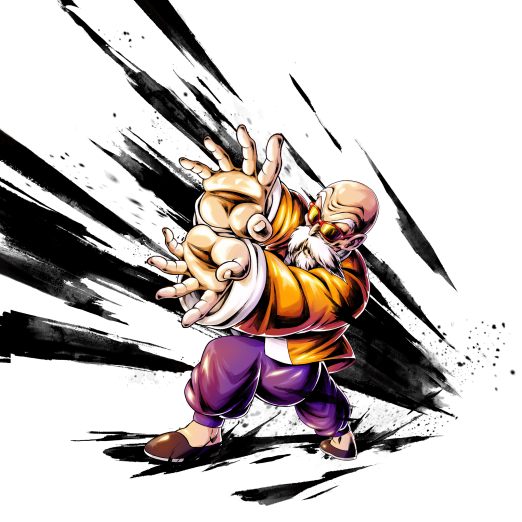 The legendary Turtle Hermit and founder of the Kamehameha Wave, Master Roshi joins the Fight in Extreme Rarity.

Equal and opposite to the fearsome power of the Kamehameha, Master Roshi's need to impress woman is just as legendary, albeit not nearly as effective. EX Master Roshi PUR gets some decent Buffs when paired with a Female Warriors, but that doesn't mean they want to be paired with him.

His Z-Ability Buffs a fairly rare Tag, but the release of SP Youth Bulma BLU does give it some utility.

Giving +40% Critical Damage to Teammates, his Main Ability is very effective when coupled with the 40% to Critical Rate he gets from his Unique Ability.

In addition to poor synergy, the absence of Tags generally ties in with lower-grade equips.

Being a Blast heavy Fighter and carrying two Strike Arts Cards never goes hand-in-hand. However, this can prove to be useful if there are Strike based Fighters present in the Team that carry Blast Arts Cards such as SP Android #18 YEL.

This is the Team he was destined for. While he's not exactly a good Support Fighter on his own, being paired with Female Warriors is where his (limited) potential truly shines.

Although, akin to the anime, Female Warriors tend to shy away from EX Master Roshi PUR, as they are much stronger and more cohesive on their own.

Being one of the few Fighters carrying a Dragon Ball Saga Z-Ability, EX Master Roshi PUR could pave the way for future support for this tag -- much like how SP Super Saiyan God Goku RED and SP Super Gogeta RED laid the foundation for God Ki and Fusion Warrior respectively.

You're Up Against Me!

EX Master Roshi PUR used to be an underrated Fighter but is now relegated to Z-Ability duties.