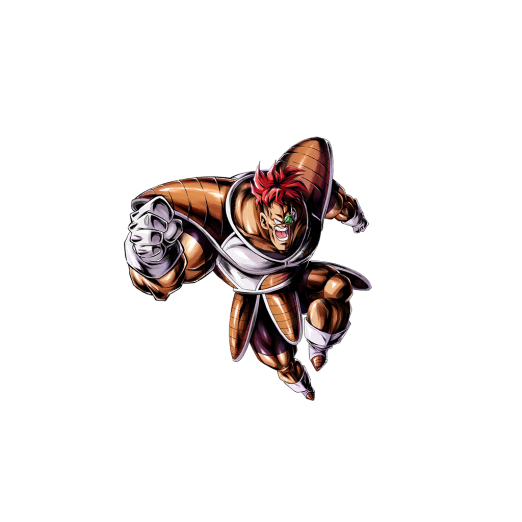 EX Recoome BLU is a powerful, standout free Fighter, hailing from Ginyu Force Special event. The most flamboyant member of the Ginyu Force more than justifies his existence by acting as a tank and a healer for his allies, both roles that Frieza Force sorely needed.

EX Recoome BLU is an incredible option on both Frieza Force and Ginyu Force. The fearsome space wrestler is more than a one trick defensive pony, however. EX Recoome BLU’s strength is impressive at all times during the match, with cumulative Buffs upon entrance to the battlefield and additional Buffs when falling below half Health.

EX Recoome BLU may be vulnerable to Buff removal, but otherwise, this Ginyu Force all-star is a Defensive juggernaut that will stay relevant for a long time to come.

EX Recoome BLU is a powerful duelist the second the match begins, gaining Damage Reduction and Strike Damage Buffs when his allies have the same allegiance as him.

EX Recoome BLU’s impressive offense is further augmented when his opponents force him into a corner, gaining additional an additional permanent Strike Damage buff when falling below half HP. This ensures that EX Recoome BLU will be a nuisance for his enemies no matter when they face him.

EX Recoome BLU’s most defining feature is his team heal that he provides via his Main Ability. This cures the abnormal conditions of all of his allies and heals them for a minimum of 15% HP.

If any of them are also Ginyu Force allies, like Recoome himself, they are healed for an additional 10% of their maximum HP.

REcoome can use this ability to instantly replenish his own Health in a pinch, preferably after his HP has dropped to below half for the sake of his other Unique Ability.

Recoome is a fully Strike-oriented Fighter, which prevents him from excelling with Blast-oriented Teammates. He has no Buffs to his general Inflicted Damage, so he requires Support to make use of Blast Arts at all.

EX Recoome BLU requries living Frieza Force Allies to Buff his own Damage. If there are no Frieza Force allies present, like in Last Man Standing situations, Recoome is not capable of holding his own.

Additionally, his permanent Buffs to Strike Damage and Health Restoration can be removed by foes that possess effects that remove Buffs, so he especially lacks longevity in match-ups against Fighters with that utility.

EX Recoome BLU is meant to be run on the front lines, and it is there that he proves his worth. He is a fantastic Teammate for SP Ginyu Goku RED and EX Burter YEL. These Fighters synergize with Burter's Strike oriented playstyle and excel with his Defensive backing.

In the ever-expanding Frieza Force tag, EX Recoome BLU is an incredible option. All of the roles EX Recoome BLU fulfills are desperately needed on the Tag, and he can fill all of them spectacularly.

Recoome is a fantastic partner for SP 1st Form Frieza PUR, and with his boss's Support, he can even deal high amounts of Strike Damage. EX Burter YEL and SP Full Power Frieza YEL each adore having Recoome around, as he's such a fantastic check for enemy Red Fighters.

Imperative Equip considering all the Buffs it gives across the board. All Extreme Blue Fighters use this Equip, and they use it for good reason.

36% to both Attack stats is absurdly potent, and on Ginyu Force Teams, these absurd Damage Buffs become even more deadly.

His signature Equip is outrageously powerful and makes him that much harder to kill with 15% Health and 20% Strike Defense.

Akin to the anime, EX Recoome BLU is very hard to take down and keeps coming for more the more of a beating he takes. His Strike Attack and durability make him difficult to play against, and his Heal on his Main Ability is a welcome addition to an otherwise fragile Team outside of himself. Ginyu Force is not as effective as it once was, but EX Recoome BLU has aged the best and is still insufferably durable.