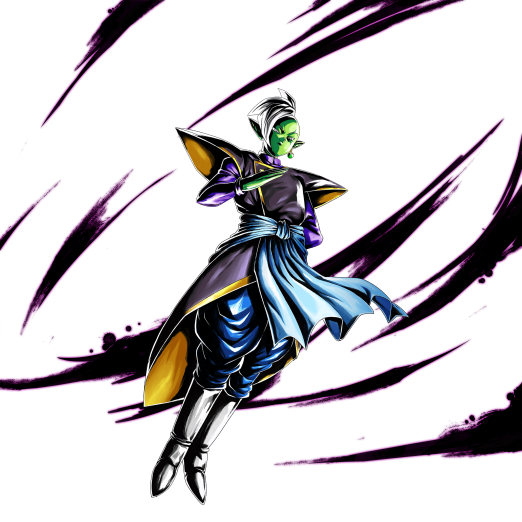 This is not especially impressive by itself until EX Zamasu's Special Arts Card is taken into account, which raises Ki Recovery, Blast Damage, and reduces Blast Arts Cost.

The most important part of EX Zamasu GRN's toolkit is his Z Ability, which is the only dual offense-boosting Z for the God Ki tag. EX Zamasu GRN is also a part of the Future Tag, but the Green misanthrope gives no support to this team.

EX Zamasu GRN's 30 Ki Restoration after Vanishing an attack and his Stacking Debuffs let him capitalize on punish opportunities better than most Fighters. If the Buffs from EX Zamasu GRN's Special Arts Card are active when a combo opportunity presents itself, this Fighter can achieve significant combo damage.

EX Zamasu GRN's Special Arts Card is required for his damage output to reach decent levels. Without ample support from his Team, the Zero Mortals Plan has little chance of getting off the ground.

EX Zamasu GRN works best with God Ki allies, as he is the only unit who is able to provide a dual offensive Z Ability to his teammates. This functionality alone will keep EX Zamasu GRN relevant for a very long time, as God Ki is a consistently supported Tag with new Fighters and Equips releasing frequently.

A must-have for the huge stat boost across the board.

EX Zamasu GRN is as one dimensional as it gets for a Ranged Fighter, so he'll take as much Blast Attack as he can get.

EX Zamasu GRN’s Z-Ability is excellent, but everything else falls short. He’s a one dimensional Ranged Fighter, can’t reliably lower his Blast Arts Card cost, and basically has no business ever seeing core play. His Z-Ability is nice though, justifying the Tier 2 placement.