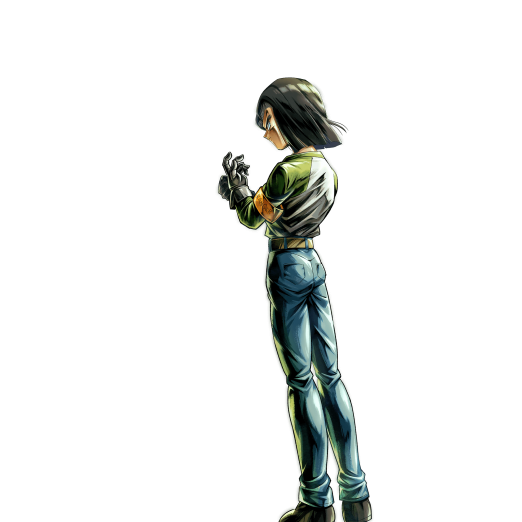 SP Android 17:DBS YEL is a jack-of-all-trades Fighter, similar to SP Toppo BLU. He has excellent Damage output, reliable tanking, and has a nifty support for his allies.

You're Not Going Anywhere!

SP Android 17:DBS YEL’s Special Move locks the opponent in which can prove to be very useful in a number of situations. He can secure a kill on an opponent, lock them in to deal significant damage and it negates the use of an opponent switching into a favorable element Fighter.

It’s especially powerful when he uses his Main Ability as he increases his Special Move’s Damage output and he draws a Special Move Arts.

SP Android 17:DBS YEL has a very annoying unique ability where he seals the enemies’ Main Abilities for 10 timer counts which activates twice. This unique ability is similar to SP Beerus GRN’s and it’s just as powerful even though Beerus does it three times.

With this, he can effectively counter transformation Fighters if the player can time his switch in correctly. This also hinders Fighters who have quick main Abilities.

Not only does he seal Main Abilities, but he also increases the cost of the opponent’s Special Arts by +15 when he’s faced with an enemy. This ability is powerful against Fighters utilizing Special Arts often in combat.

SP Android 17: DBS YEL gets a huge 50% Damage inflicted increase when a Universe Survival Saga or Androids team members goes down. This increases his total Damage output to a whopping 140%. The opposition has to be wary of him as he will tear them to shreds with his unlimited energy. This also makes him a very good last-man-standing Fighter.

SP Android 17:DBS YEL also provides some support for his teammates. 30 Ki Restore on swap out along with a 10% health increase which adds to the survivability of his teammates. The Ki restore is useful for the Fighter coming in to prolong the combo.

SP Android 17:DBS YEL has an amazing toolkit however, his stats aren’t so great. He doesn’t rank top 50 in any stat amongst all Fighters in the game and his Blast Attack stat is particularly low, ranking at 117th. It’s safe to say that his Blast Arts won’t be doing much Damage.

As mentioned in the Overview, SP Android 17: DBS is one of the building blocks for the Universe Survival Saga team. He’s one of the core Fighters on this team alongside LL SP Ultra Instinct Goku PUR and SP Android 18:DBS BLU. Even so, the team isn’t ready for competitive play as they don’t have a wide range of Fighters nor do they have any Zenkais. Hopefully, the third-year anniversary can flesh the team out some more.

With SP Android 17:DBS YEL being a YEL Fighter, it’s clear that he would never have a chance of being the main YEL Fighter for the Androids team as that spot is permanently occupied by the terrifying beauty that is, SP Android 18 YEL.

A self explanatory Equipment choice.

A Pure Strike Buff is absolutely necessary with such large Base Strike Buffs from the previous Equipment.

It’s unfortunate he shares the same color as SP Android #18 YEL — one of the most oppressive units this game has ever seen — as he would’ve been a solid addition to Android, helping them complete a full color wheel.

Luckily for him, while Universe Survival Saga could still use a little more, he likely won’t have to wait long for stronger reinforcements with Anniversary around the corner.