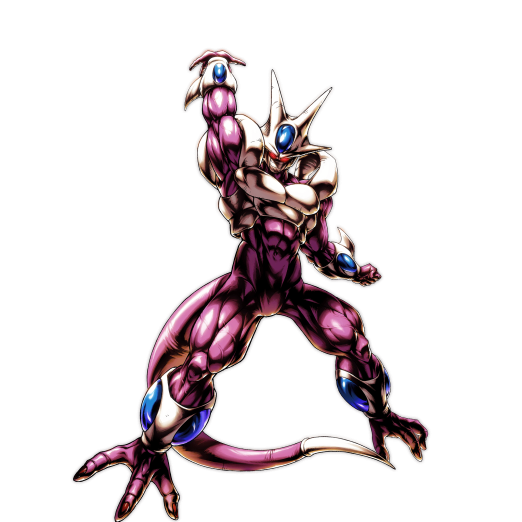 Defensively, SP LL Cooler RED leaves much to be desired but his offensive capabilities makes up for it.

SP LL Final Form Cooler RED increases the enemy sub count by 2 upon landing a Strike Arts. This is an insanely broken ability as it can be used to take out YEL Fighters easily, take out Fighters below 50%, or to Rising Rush a big threat on the enemy’s team.

This can be evaded at times if the enemy is expecting a Cooler switch in as he changes all Blast Arts to Strike and Cover changes into a Fighter with a Strike Cover but for the most part, it’s unavoidable.

SP LL Final Form Cooler RED gets type neutral for 10 timer counts every time he enters the battlefield if there is an SSJ Fighter on the opposing team. This is insanely broken in the current meta where you fight an SSJ 8 times out of 10, which allows Cooler to destroy BLU Fighters quickly.
It’s worth noting that this never goes away once the battle begins which makes it even more busted.

SP LL Final Form Cooler RED only has 40% Ultimate Damage Inflicted unless the enemy is below 50% HP which makes his Ultimate Arts not as threatening at times. Overall, it's still very powerful due to the -50% cut penetration that he gets on activation.

SP LL Final Form Cooler RED pairs well with SP LL 17&18 RED and SP LL Perfect Cell PUR as all these Fighters are some of the best Damage Dealers in the game. It’s sad that Cooler is the same color as 17&18 however, this leads to a top-tier PPR (Purple, Purple, Red) Powerful Opponent setup.

SP LL Final Form Cooler RED isn’t as much of a threat on Lineage Of Evil as he is on other teams due to the team buffing Blast Attack with their Z-Abilities while Cooler primarily wants Strike Z-Abilities. Nevertheless, Cooler is still insane on this team as he can decimate teams without effort.