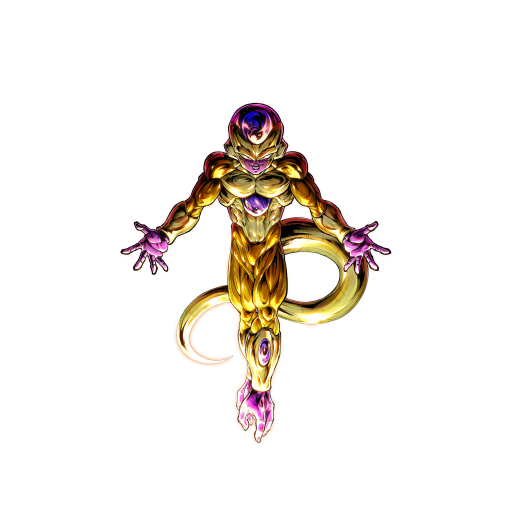 Frieza is back and his power is more devastating than ever, taking on his gilded from from the Resurrection "F" Saga. SP Golden Frieza GRN's incredible evolution gives him overwhelming Offense for the first 60 Timer Counts of a match.

Through his Debuffs and stacking Damage Buffs, Frieza has the potential to put an irreparable divide between his Team and his enemy's, such that there's no way for his foes to gain an advantage after his Damage Buffs elapse.

SP Golden Frieza GRN boasts the second ever Team-wide Attack via his Main Ability's drawn Ultimate Arts Card, which can totally end the match by itself if used strategically. If this brutal move hits an enemy with Color Disadvantage, it can shave off the Health of the entirety of Frieza's foe's Team.

Nowadays, Frieza's limited Damage potential and minimal bulk generally make him ill-equipped for non-Saiyan match-ups, but when he shines, he shines very brightly.

Right out the Gate

SP Golden Frieza GRN was built to be the strongest early-game Offensive Pivot in the game. Through the uncancellable Buffs he has for 60 Timer Counts - his +1 Card Draw Speed, his +50% Blast Damage Buff, his -5 Blast Arts Cost Discount, and his +30% Ki Recovery Buff - he can blast out of the gate with peerless Damage Output.

When these Buffs are active while he attacks a foe under the influence of his +35% Damage Received Debuff, SP Golden Frieza GRN is undoubtedly one of the strongest Fighters in the game. If Frieza is able to get his hands on Support Buffs from the rest of his Team, he's able to wreck unparalleled havoc.

The Buff potency of his Z-Ability is very strong, but the real strength of it comes from the fact that it Buffs both Offensive stats and two Tags at 6 stars.

This increases his Team options and his shelf-life in the face of potential power creep. As a bench option, his Buffs to Strike Attack and Blast Attack are invaluable.

The aforementioned Unique Ability is a big reason why he does so much Damage, but his second Unique Abiluty, “Let Us Begin Our Revenge," supplements it tremendously. He does an innate 30% extra Damage to Saiyans, making him one of the best Tag-counter Fighters ever released.

Any Blue Saiyan he happens to encounter will die in the blink of an eye. Even Purple Saiyans are not entirely safe from his onslaught, though Golden Frieza must work much harder to bring them down.

Your World is Forfeit!

The gilded emperor has one final trump card up his sleeve as his innate Buffs teeter on dissolution -a devastating Ultimate Move that can deal Damage to the entire Enemy Team depending on the Damage it inflicts to his Target.

This terrifying Massive-multiplier attack gets +35% stronger if it is activated within his 60 Timer Count Buff window, and also gets an additional +35% Damage Buff if it is activated when Frieza is below 50% Health. If the stars align, this move has the potential to finish a game by itself.

For as insanely powerful he is Offensively, he can go down just as quickly if at the receiving end of an enemy Combo.

Luckily the additions of SP FP FF Frieza YEL and SP Cooler PUR have given the Team exceptional Defensive viability, but SP Golden Frieza GRN still needs to be sheltered. If he didn't have ample Defensive Options on both of his Main Tags, he'd unfortunately be non-viable in a meta rife with Purple Fighters.

His Debuffs let him spread mayhem decently well when primary Buffs deactivate, but in Crisis situations, the golden emperor's wrath is about as threatening as a child's.

This is definitely his greatest and most consistent Team option; Lineage of Evil has fantastic color coverage and versatility with SP Golden Frieza GRN bringing the big guns. The aforementioned SP Final Form Full Power Frieza YEL is a mandatory teammate for the golden emperor, as no Fighter in the game better protects him from Purple Fighters.

SP Cooler PUR,  SP FF Frieza RED,  and SP FF Cooler BLU all have the power to Buff Golden Frieza, allowing him modest to above average Damage output even after his Buffs run out. If he can be Buffed by them before his innate Buffs dissolve, he can deal out absurd amounts of punishment.

The Support and Defensive potential of SP 1st Form Frieza PUR is an invaluable Teammate for this Frieza variant, as his Defensive utility and constant background radiation of Support is exactly what Golden Frieza needs to make it to the late game and perform adequately there.

This Tag's near limitless versatility gives SP Golden Frieza GRN numerous Team options. Because all Ginyu Force Team Fighters share this Tag, they can supplement and complement the rampage of their master.

EX Recoome BLU is among the strongest Defensive Fighters available, and can protect Frieza from all kinds of opposition. If a Defensive Blue isn't required, SP 1st Form Frieza BLU can double down on Golden Frieza's Saiyan-hate with his incredible Blast Damage.

The aforementioned SP 1st Form Frieza PUR and SP Final Form Frieza: Full Power YEL each allow the gilded tyrant to survive and perform better in combat. They are stellar additions to this Tag's roster.

The added Defense is not necessarily a blessing, as there's no saving his lackluster bulk, but nevertheless this Equip's Offensive offerings are too good to pass up.

Frieza's Strike Damage output is far from poor, and this Equip's massive Buffs to it and the emperor's Defenses make this equip a premier choice for him.

The Buff to both Offenses is very much appreciated here, especially on Lineage of Evil comps, where the pure Buff this Equip provides to Strike Attack comes into play.