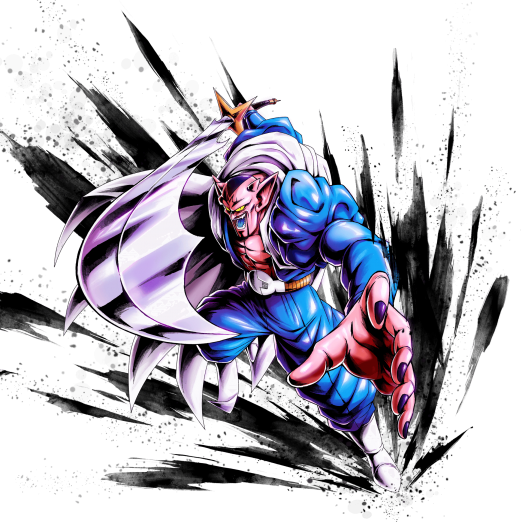 SP King Dabura BLU’s stats, while at one point were fairly decent all-around, have started to show signs of aging. His Blast Damage is now overshadowed by monstrous Fighters like SP SSJ Broly PUR, SP Gogeta BLU, and SP SSJ Kid Goku GRN. His Tanking ability has been surpassed by another Blue Fighter, SP Ribrianne BLU.

It’s not all bad for the King of the Demon Realm, though. His held Extra Arts Card Paralyzing Blast Card can make other Fighters shine. His Z-Ability also double boosts--even at lower levels. SP King Dabura BLU can be brought in as a fantastic bench Support.

It’s the little things that make a huge difference, like SP King Dabura BLU’s Held Extra Arts Card--which he can use to instantly Restore Ki and reduce the Damage sustained from an Enemy’s Combo--and Main Ability which nullifies three of his own Attribute Downgrades and one each for his Teammates

The resources to stop a Fighter in their tracks is incredibly valuable under the current Combat system. Paralysis can come in the clutch, freezing an Enemy in place to stop their Attack dead in its tracks and allowing for a counter. He has access to Paralysis via his Special Move and Blast Arts Card.

Rebel Without a Tag

SP King Dabura BLU doesn’t just have limited Tags, he has none. This means barely any Equips to speak of, and no PVP viability unless he’s piggy-backed onto another Team Build with the understanding he won’t get Z-Ability Buffs unless there is another color-locked Z-Ability holder on the Team.

The silver lining to this is that he Buffs two stats with his Z-Ability, even at its lowest rank.

Even with an Extra Move that does so much, it comes at a price that builds over time. Even though the Extra Arts card only costs 10 Ki, every time it’s used, it increases the cost of his Special Arts Cards by 10 to a max of +30. Because of that, this is the sort of Move that should be used very sparingly.

Since he doesn’t have any Tags, there’s no choice but to assign SP King Dabura BLU by his color. On the bright side, many other Blue Fighters have Z-Abilities that also double Buff. This means he can be included as the Counter in a Yellow Color-Counter Team alongside strong Fighters who can benefit from the Extra Arts Card like SP FF Frieza YEL and SP Perfect Cell YEL.

SP King Dabura BLU is all about protecting the Team from debuffs while also debuffing the Enemy through paralysis and making some Arts Cards unusable.

Unfortunately, he was practically dead-on-arrival- due to the lack of a Team, and now he's being power crept to make it worse.