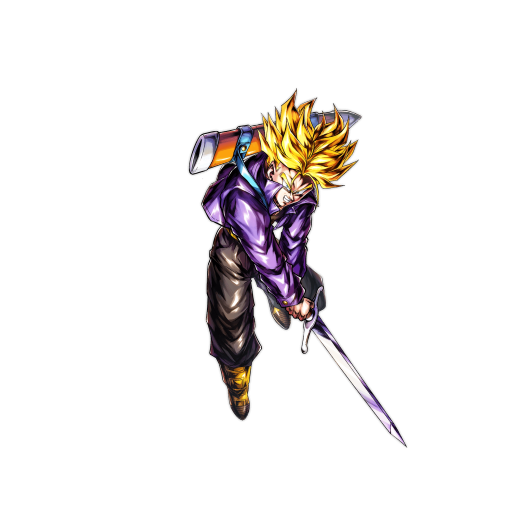 LL SP SSJ Trunks GRN is an extremely offensive Fighter that’s capable of decimating the opposition in the early game due to his Extra Arts Card that draws a powerful Ultimate Arts Card. With this, he’s able to deal extreme amounts of Damage to the opposition and that can be a big advantage in the early game.
LF SSJ Trunks GRN is the only Hybrids Fighter to have access to Blast-Armor which helps his ability to get priority in neutral.
Defensively, Trunks isn’t fantastic but he can heal quite a bit with his Extra Arts and Main Ability which helps his sustainability.

With L.O.E being a team that gets used a bit in PvP, LL SP SSJ Trunks GRN  having an anti-Frieza Force passive helps his teams to win the matchup more easily. Almost all L.O.E Fighters are Frieza Force with the exception of every Cooler in the game but the team consists of Frieza Fighters mainly.

LL SP SSJ Trunks is the second Fighter in the game that’s able to use two Ultimate Arts Cards in a match, the first being UL Super Gogeta BLU. With this, Trunks’ Damage output skyrockets, especially if both Ultimates are used after his Main Ability is activated where he gets Damage-cut penetration.
It might be tempting to use Trunks’ Extra Arts right at the start of a match however, it’s best to atleast use 4-6 Arts Cards before using it so that he can be half-way or fully ramped up.

Trunks’ Ultimate Arts also regains his vanish gauge and reduces the opponents Ki which helps him get back to neutral after it’s landed or, allows him to have a chance to dodge an attack if his Ultimate Arts misses.

LL SP SSJ Trunks GRN has an anti-tag switch passive however, it’s more of an anti LL SP 17&18 RED passive as he gets extra Damage to Powerful Opponents Fighters and locks their Extra Arts and Special Move Arts for 15 timer counts. Nevertheless, reducing 40 Ki and destroying a card when any Fighter tag switches is extremely good.

LL SP SSJ Trunks GRN gets 5 timer counts of defensive type-neutrality when he enters the battlefield which is similar to LF SSB Vegeta GRN’s passive. This allows Trunks to take a few hits from powerful PUR Fighters for a short duration which is useful in many cases.
Trunks also gets 10 timer counts of type-neutrality on his Main Ability which allows him to decimate opposing PUR Fighters.

LL SP SSJ Trunks GRN not having any cover nullification is a detriment to his kit and it’s what limits him from being in the top 5 best Fighters in the game as all those Fighters have some way to get cover-nullification.

LL SP SSJ Trunks GRN performs the best on a Hybrids team as the team has a lot of Fighters that give support such as LL SP SSJ Youth Gohan PUR and LL SP Future Gohan YEL. Trunks also has access to the best pure Equipment in the game on this team and he’s undoubtedly the best GRN Fighter for the team.
His Z-Ability is fantastic and he can act as a primary Damage dealer but he doesn’t bolster the team to the upper echelon of PvP teams which should be the case when Beast Gohan, presumably drops this year.

LL SP SSJ Trunks is a great GRN Fighter for the Future team as he has a completely different role than SP Zamasu and Goku Black Assist GRN as they focus on being a defensive wall. Trunks on Future bolsters the team’s offensive capabilities to new levels.