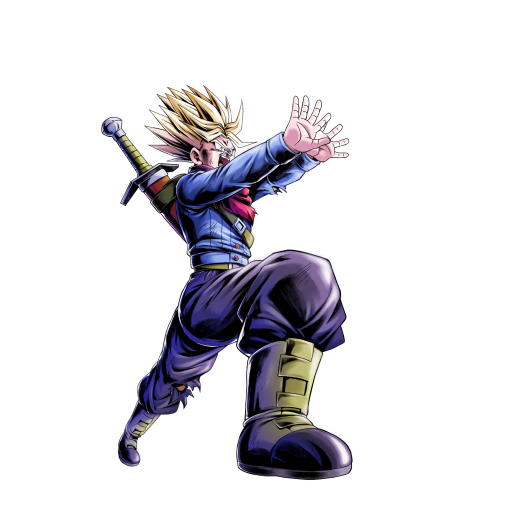 SP SSJ2 Trunks BLU maintains his place as Future's best Blue Fighter, well over a year since his release. In the context of his Tag, his Double Held Blast Cards make him bothersome to use, considering all of the powerful Melee Fighters at the Future Tag's disposal.

Despite everything working against him, he still has a decent kit with powerful Blast Damage output that can increase throughout the Fight. He has some meager Crisis Utility and is absolutely capable of outputting strong Combos, though some archaic elements of his design hamper his viability in the current Meta.

His Blast Damage output is great thanks to his Unique Abilities. In particular, he get a 40% Boost for 10 timer counts each time he gets switched in. He can also extend his Combos with the 20 Ki he restores whenever he dodges an attack.

While Blast Cards aren’t optimal compared to Strike Cards, this Fighter can be a huge threat to his foes once his foes die, thanks to his Crisis-like Abilities that increase his Inflicted Damage by 15% per defeated Future Tag Fighter.

Each time he gets switched out, he's Healed for 10%. Given that this Fighter’s Defense is a bit below average, it’s good for him to have an Ability that increases his overall survivability.

Considering that he has to be switched often to activate his other Unique Ability Boosts, SP SSJ2 Trunks BLU will be able to Heal by a high amount throughout a Match.

While this Fighter has multiple Teams he can fit in, he isn’t the first choice in any of them. Disregarding his held Blast Cards, other Fighters are just flat out better than him.

Additionally, his Z-Ability is quite bad since it only Boosts Blast Defense, so he’s not even a good bench Fighter most of the time.

He’s not an optimal Fighter for this Tag anymore. As a Blue Fighter, he is probably this Tag's best option, though because he's pretty outdated, he's not optimal on the Team's core.

He can still combo well with SP Teen Trunks PUR and SP SSGSS Vegeta GRN, who each significantly Buff his Damage. SP SSR Goku Black RED and SP SSJ Gohan YEL Buff his Damage in unique ways, with Rose increasing his overall output via Debuffs, and Gohan Buffing his output upon death.

The +20% to Blast Attack and extra Damage to Saiyans makes this an absolute must-have for Ranged Fighters like SP SSJ2 Teen Trunks BLU.

15% Blast Attack is necessary here. Despite being a Ranged Fighter, SP SSJ2 Trunks BLU also tends to be played with Strike-centric Teams, meaning he'll likely be putting his respectable Strike Attack to good use anyway.

Awakened !!! can be used instead of he’s used in a Hybrid Saiyan Team.

Blast Attack for a Ranged Fighter is self-explanatory. SP SSJ2 Trunks BLU is quite resilient, so Strike Defense in the last slot is great as well.

Future got a huge boost with SP Super Saiyan Rosé Goku Black RED, but even with the Tag in dire need of a Blue, SP SSJ2 Trunks BLU is not the greatest pick. He’s simply too old to consistently compete.