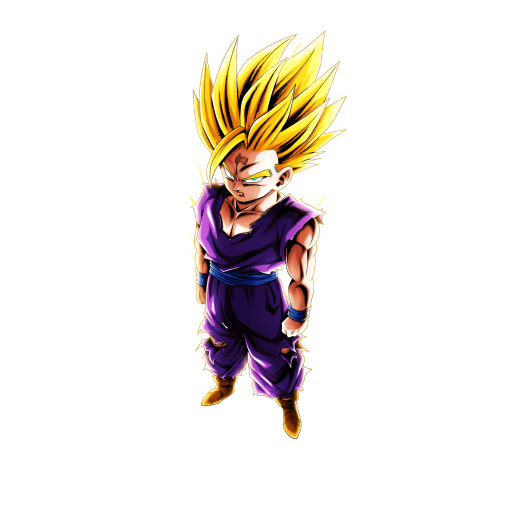 Gohan's power is derived from his astoundingly high Damage Buffs that activate as he takes Damage. His Strike Damage at every point in the match is top notch, and he can use his Ultimate Arts Card to utterly lock his foes out from Healing Effects and deal Massive Damage in the process.

Zenkai 1 SP SSJ2 Youth Gohan PUR still runs into some trouble though; his Damage Buffs require him to take hits and he's not the most Defensively viable Fighter in the Meta. That being said, Gohan is absolutely capable of tearing through anything in his way when he's at his best.

Zenkai 1 SP SSJ2 Youth Gohan PUR commands respect with his highly Damaging Combos that kick in once he takes some punishment.

Whenever Gohan takes Damage while his Health is above 50%, he Buffs his Damage by 20% for 15 Timer Counts. If the enemy takes Gohan's power-spiking potential lightly, he will quickly rack up a devastating suite of Buffs that will turn his Strike Arts into decisive blows.

If Gohan instead takes Damage such that his Health drops below 50%, he's greeted with a permanent +50% Inflicted Damage Buff, giving him absurd Damage for the remainder of the match.

His Extra Arts Card Buffs his Damage by 20% for 20 Timer Counts, restores his Ki by 30, and negates all Attribute Upgrades and Abnormal Conditions for 15 Timer Counts. This effect propels his combat efficacy so much that it's almost recommended to wait until and Extra Arts appears to swap Gohan in.

Additionally, his Main Ability contributes to his Damage by Drawing an Ultimate Move, and that's not all it does. This Main Ability gives the first Super Saiyan 2 +40% Strike Damage for 20 Timer Counts and restores his Health by 20% when it's triggered.

The Ultimate Arts it draws inflicts Massive Damage and prevents all Health Recovery Effects from working on the target for 40 Timer Counts - a fatally long time to go without help. With these two combat tricks in tow, Gohan is able to brandish explosive momentum-swinging Buff effects at a moment's notice.

Zenkai 1 SP SSJ2 Youth Gohan PUR remains a deadly Crisis Fighter with excellent late-game abilities. Per defeated battle member, Gohan receives a permanent +20% Buff to his Strike Damage, as well as a Ki Recovery Buff depending on how many Allies have been defeated.

If 1 remains, the Buff is +30%; if none remain, it's +50%. Altogether, Gohan is more than capable of reaching over +100% Inflicted Damage, with incredible Ki Recovery backing up his brutal Strike Arts Combos. This gives Gohan the potential to completely turn losing games around with a couple lucky guesses.

The Conditions for Rage

Zenkai 1 SP SSJ2 Youth Gohan PUR’s Buffs come from Unique Abilities that depend on Teammates dying or taking considerable Damage - and neither situation is particularly ideal.

Because SSJ2 Gohan must be backed into a corner before his Offensive potential can be fully realized, his Damage is often middling in the early stages of a match. Gohan is also not bulky, despite his Zenkai stats giving him a bit of a buffer Defensively.

It is for this reason that Gohan is somewhat lacking as a dedicated Crisis Fighter, even though his Unique Abilities create the opportunity for a last minute win.

Gohan's Blast Attack stat is very poor, so while his Inflicted Damage Buffs are largely generic, his Blast Offense is very poor. This limits Teambuilding for the enraged Super Saiyan, as he requires Strike-oriented Teammates to excel.

Zenkai 1 SP SSJ2 Youth Gohan PUR can absolutely function as this Team's main Purple Fighter, though he competes for the spot with SP Teen Trunks PUR. Even if a player decides that they'd rather use Trunks, Gohan's amazing Zenkai Ability should secure him a spot on the bench.

While Zenkai 1 SSJ2 Gohan isn't the Son Family Tag's strongest Purple by any means, he's still able to work well on this Team because of its roster of Supporters.

SP Saiyan Saga Goku BLU is a superb Supporter who can really enhance his Damage, as is SP SSJ Kid Goten PUR. SP Goku RED is a strong Teammate as well, though the two of them will squabble over Extra Arts Cards.

Gohan needs to reach higher Zenkai Awakening levels to provide Support for this Team, but even at Zenkai 1 he can work as a solid Purple Fighter.

He's as one-dimensional a Melee Fighter as it gets, and should go for as much Strike Attack here as possible.

This Equip was a great addition for him due to the high Strike Attack and Defense, and it works very well for him on Hybrid Saiyan Tag Teams.

This is actually a nice choice for giving him a massive Damage Buff to his Ultimate and Special Moves. If rolled, the extra Damage to Regeneration Fighters makes him a nice niche pick against that Tag as well.

He pairs nicely with SP SSJ2 Gohan RED. Hybrid Saiyans have needed an update at the Purple slot for quite a while now, and at Zenkai 7 he fills that void. He’s a serviceable damage dealer, support, and crisis Fighter that not only helps pave the way for SP SSJ2 Gohan RED, but can hold his own in case things go terribly wrong.