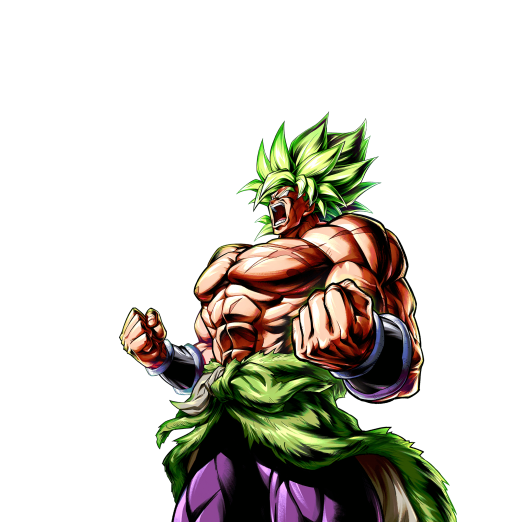 SP Super Saiyan: Full Power Broly makes his long awaited return in the form of a Legends Limited Fighter. Does Broly have a similar impact on release as his Purple counterpart released 2 years ago? Let’s find out.

This time he takes the form of an offensive juggernaut with the ability to control matches with his stacking Damage Inflicted and Buffs when the enemy switches Fighters. However, the lack of a consistent Damage Reduction Buff makes him fragile.

You’re not running away are you?

Broly’s second Unique Ability provides him with his most powerful Buffs. When the enemy switches Fighters, or an enemy Fighter is defeated by Broly he receives 25% Damage Inflicted for 10 counts, 50% of his Vanish Gauge is recovered (up to 5x), heals 10% HP (up to 5x) and gives +1 Draw Speed for 10 counts.

This combined with his first Unique Ability can truly wreak havoc on your opponents Team. As soon as a momentum is built up by Broly, he can stay longer in the field through his Vanish Recovery and Draw Speed and keep putting an enormous amount of pressure on your opponent.

Whether or not his Ultimate kills his opponent, Broly will be activating his Second Unique granting him the most important Buff being 50% Vanish recovered which can allow him to stay even longer on the field and keep putting enormous pressure on your opponent. However, if the Ultimate is activated and your opponent switches Fighters to prevent the Ultimate from killing, you can stack Broly's Second Unique twice which can have a devastating impact if Broly can land another combo.

While Broly may be a monster offensively if left unchecked, he isn’t durable. The lack of a consistent Damage Reduction is to blame here. Broly’s Green Card may provide a Reduction, however it’s only for 1 combo and can’t be relied upon consistently.

Broly can build up enormous amounts of Inflicted and stack multiple Draw Speed Buffs. However, the lack of a Ki Recovery Buff or any additional Ki granted outside his Main Ability and Green card can bring Broly's rampage to a halt when he has a hand full of cards but no Ki.

A must-have, greatly boosting Broly's survivability as well as his own massive healing.

Another must-have, a Pure Strike Equipment is necessary for Broly, amplifying his Strikes.

Please note, for the Saiyan team, You Failure! with a Strike roll can be used here due to the additional Zenkai Abilities Broly receives.

He’s being considered at 3 stars on the Tier List. At 6 stars, SP FPSSJ Broly BLU would be middle Tier 1

Don’t be discouraged by Broly being Tier 1, he just has the unfortunate reality of being behind several transforming units and Zenkai units with astronomically high base stats. At 3 stars, he’s still right up there with some great units, and is the clear cut starter on Sagas. It is important to note that while he does work with Bardock, the aforementioned "Nameku" has solidified his spot on the SSJ team, which ultimately hurts Broly's placement.

Broly is a diabolical feast or famine kind of Fighter, and games with him can get out of hand very quickly. He has a seemingly endless amount of card draw speed, Blast Armor on everything which is beneficial for keeping him in even when he has no Vanish Gauge, and a devastating Ultimate Move that actually forces switch out if it doesn't kill the enemy, tying into his other Uniques quite nicely.