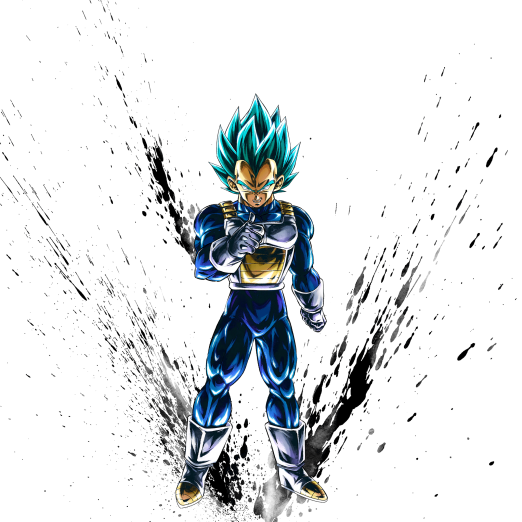 While his art’s pose has often been a recipe for disaster for him canonically, SP SSB Vegeta PUR’s debut in Dragon Ball Legends is quite successful. His main objective was to get revenge on Goku Black, but he actually managed to become about as strong as Merged Zamasu in Dragon Ball Legends, what a weird turn of events!

Vegeta’s main highlight is his spectacular potential as a Support, which is a bit anticlimactic considering he wanted to sort things out alone in the anime, but if it manages to make the Prince of Saiyans better than a Goku variant that released alongside him ( which is sadly rare ), we’ll take it for sure.

A Man on a Mission

Representing his canonical efforts to save the Future, this Vegeta variant fits fantastically in both Future and Vegeta Family lineups. As previewed previously, this is mostly thanks to his amazing Supportive Effects, in fact he’s able to greatly increase the Team’s Damage output both as a healthy Saiyan and as a corpse.

Not only that , but he also comes with nifty Buffs from his Special Move and Main Ability, as well as being able to reduce sub count, provide Ki and a Card on switch and heal his Allies after his last breath.

All in all, this Fighter is arguably the best Support in the Game.

SP SSB Vegeta PUR is also a potent Damage dealer in the early-mid Match, thanks to his capability to add stackable Buffs on top of his 50% Damage related one. This makes him a considerable threat for any opponent that doesn’t benefit from color advantage over him. However, his Strike Stat is quite low so even with all those Buffs, having Blast Cards is essential for him to perform at his best.

As stated before, Vegeta Buffs his allies’ Damage when he dies, however that’s not all he does. In fact, he also Heals the whole Team and most importantly he reduces the opponent’s Dragon Balls count by 3. Now, there are instances where this Effect could be useless, like when SP SSB Vegeta PUR dies due to a Rising Rush ( due to the opponent already having 0 Dragon Balls ) , but in any other situation the Ability is very useful as it effectively makes it very hard for the enemy to use two Rising Rushes in a single Match.

While SP SSB Vegeta PUR covers his role extremely well, there are some things that hurt is Effectiveness as a whole. To start with, his Offense is largely tied to his initial Buffs, which can become an issue if he’s not the one to get defeated first on the Team.

Secondarily, his Durability is quite low, and while that might seem a non-issue, being a durable Purple comes in handy in a Meta where there are powerful Green opponents to stop when they’re on the Offense. All in all, SP SSB Vegeta PUR makes his Teams recklessly Offensive, which has many pros but also some cons.

SP SSB Vegeta PUR fits pretty well in Future by making SP SSB Vegito BLU even more disruptive than he already was. Providing Ki, a Card and multiple Damage Buffs after switching is just too good considering Vegito is able to further stretch the Combo thanks to hi Strike Card mechanic. This tactic works even better when Vegeta can use his Main Ability to recover Ki.

Aside from that hellish duo, SP SSB Vegeta PUR makes everybody on Future much better so he seriously competes with SP Merged Zamasu PUR for a spot on the Team.

SP SSB Vegeta PUR and SP Teen Trunks PUR cover similar roles, but the former just does it better by providing better Support and a better Z-Ability. He’s a staple for the current Vegeta Family Team.

This Equipment is a must-have to amplify Vegeta's Blast Damage. In addition to being the optimal Equipment for the Future Team, the optimal Vegeta Family Team consists of Future units, making acquiring this Equipment a high priority task.

On the God Ki Team however, Hurry, Vegeta! is most optimal here as the Team is entirely made up of Saiyans, but not all belong to the Future Tag.

With a large Buff to both Blast and Special Move Damage, this Equipment has high value due to Vegeta being a Ranged Fighter with his Main Ability granting him Ki and a Special Move.

As an alternative, You're Sure to Win! can be used instead or alongside "Let's Go, Vegeta!" as it has similar Buffs.

Lastly, due to Vegeta being below average defensively, this Equipment provides him with additional survivability. Similar options to this Equipment are: This Should be Fun and Gohan Protected Me....

Alternatively, You're Sure to Win! may be used here to further increase Vegeta's Damage potential in exchange for lower survivability.

SP SSGSS Vegeta (Future) PUR starts off the game with huge damage potential for the first 50 timer counts, but that meshes together very well with his permanent death Buffs. He also has some Support qualities in his toolkit that function similarly to SP SSGSS Vegeta GRN.

The recent battle changes have made his death buffs that much more crippling, as Rising Rushes are not as easy to get. Vegeta taking away Dragon Balls at a critical point of the match can seal the other players fate.