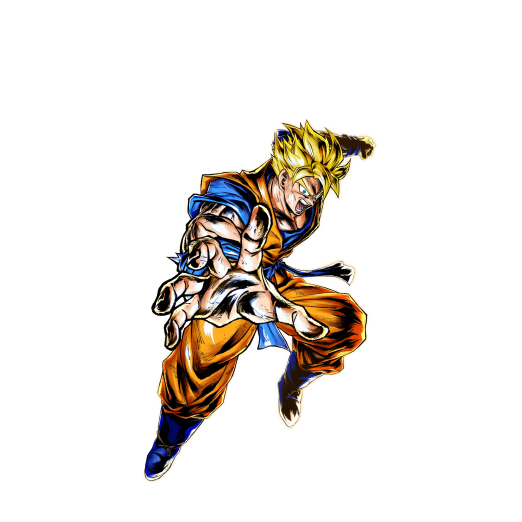 This is the Gohan that fought against the Future Androids from Android Saga Z, which came at a hefty price -- the loss of his arm and ultimately, his death.

Like most adult Gohan variants, he has an indomitable fighting spirit and remains a resilient Fighter from the start until the bitter end. It’s not all bad if he’s taken out, as his “Passing on the Will” Unique Ability gives the rest of his Team permanent Buffs, really showing that he would give his right arm for anyone on his Team.

A ferocious Fighter on release that could single-handedly punch a hole through most Fighters, he has felt the effects of power creep but is still a good option in any Future Team.

As a reference to his heroic sacrifice during the Android Saga, this Fighter’s death leaves his Teammates stronger than before with a permanent Strike Damage, all Damage, Ki Recovery Speed, and Arts Card draw speed increase.

With a Unique Ability like that, he will most certainly be avenged.

With the exception of his Main Ability, which draws his Ultimate Arts Card, every Move and Ability this Fighter has increases the Strike Damage output of himself or the Team--including the Main Ability drawn Ultimate Move.

This still makes SP SSJ Gohan YEL a handful for a lot of Fighters in the game.

SP SSJ Gohan YEL doesn't mind dying, but he would prefer to stay alive so he can hand out insane amounts of punishment with his various Strike Attack Buffs. His Equips give him absolutely anything he could ever wish for with high Strike Attack and Defense Buffs.

Despite being a heavy hitter in the Strike department, his Blast Attack has nothing going for it whether it’s his stats or toolkit. This makes him predictable in terms of Offense.

This may seem like a small issue considering his Synergy and Buffs--and it kind of is. SP SSJ Gohan YEL’s base stats are at at the high end, but average, nonetheless.

If there’s one thing this game is strict on, it’s power creep.

Still, this Fighter has a highly valuable tactical toolkit, so it will likely be a while before he falls in the ranks, especially if the Future Tag continues to grow.

This Team focuses primarily on frequent switching, but it’s best to let SP SSJ Gohan YEL die if the Match is going poorly due to his ability to permanently Buff his Teammates when this happens.

The iconic trio of him, SP Mai GRN, and SP Zamasu RED has felt the effects of power creep but still remains a solid Team to bring to PVP.

While this Team is definitely an option, it’s not really in the same league as the other two. It’s definitely a great choice for Synergy purposes, but preferably only for for Players who have SP SSJ Gohan YEL at 5 stars so he can Buff the rest of the Team.

SP SSJ Gohan YEL also loses out on a massive Strike Buff if he’s not paired with a Future Fighter.

He's Strike based all the way, and makes great usage of this Equip.

Strike Attack goes without saying, but SP SSJ Gohan YEL is a very resilient Fighter so giving him additional Defenses is just as important.

This Equip is tailor-made for SP SSJ Gohan YEL. His Strike Defense lags behind his Blast Defense, and as a devastating Melee Fighter he loves the 18% Strike Attack to go along with it.

Awakened !!! can be used instead of he’s used in a Hybrid Saiyan Team.

His Special Move increases Enemy Strike Damage received by 25%, his Extra Move removes Debuffs in addition to self-healing when Teamed with Trunks variants, and his drawable Ultimate Move removes Enemy Attribute Upgrades. All of this makes him extremely flexible in Combat.

The addition of SP Super Saiyan Rosé Goku Black RED has given him a bit more viability, but he's still a bit power crept.