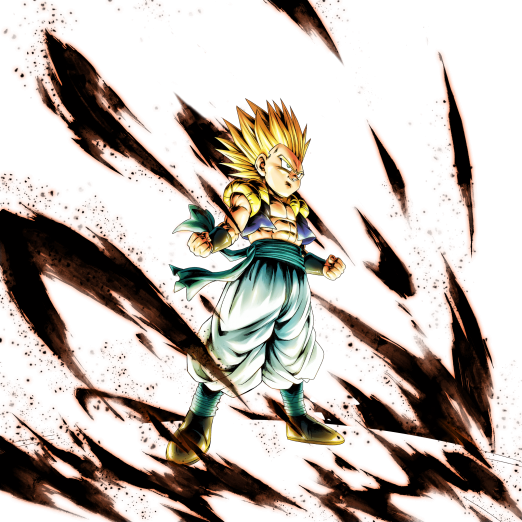 Best friends forever until death or they unfuse: This Gotenks variant comes from the Majin Buu Saga when the two boys practiced Fusion in the Hyperbolic Time Chamber in order to defeat Majin Buu. This Fusion Warrior might be scarily powerful in the Dragon Ball universe, but he's fairly underwhelming in Dragon Ball Legends.

The still boasts a high Blast Attack stat despite his age, as well as some impactul Abilities that can inflict statuses like Faint and Paralyze, but overall he's middling, and his Blast-oriented gameplan is weak in practice.

His Defense is nothing to write home about, but SP SSJ Gotenks PUR is an all-or-nothing sort of Fighter, so when he succeeds, the rewards are enormous.

SP SSJ Gotenks PUR has a good balance of Damage Buffs, Ki Recovery Speed Buffs, and Enemy Debuffs. His primary +40% Blast Damage Buff stays active until 20 Timer Counts elapse, so he has a limited window to make an impression in.

His Special Move Debuffs Enemy Vanishing Gauge Recovery Speed by 50%, and Ultimate Move has a 40% chance to inflict Paralysis, giving him some minor Status-spreading utility.

SP SSJ Gotenks PUR has access to an Ultimate Move via his Main Ability, which to this day remains one of the more powerful effects in the entire game.

What makes his Ultimate Move that much deadlier is the fact that is has a 40% chance to inflict Paralyze, an Abnormal Condition which can freeze the Enemy Fighter in place and allow for him to continue his assault.

Unfortunately, because of its 25 Timer Count prerequisite, there's no way to use this move while Gotenks has his main Damage Buff active.

As much as SP SSJ Gotenks PUR’s Abilities work to make his Burst Damage effective, it’s important to recognize how limited its effective window is. He only has high Damage for 20 Timer Counts, which means he's as early-game oriented as he possibly can be.

Relic of his Time

For some strange reason, the Dragon Ball Legends game designers decided that Gotenks' Special Move Arts would be too oppressive at 50 cost, so he's the only Fighter in the game with base 60 cost Special Arts Cards. This is not only completely silly, it also gets in his way during his Combos.

While a trailblazer for the Tag, SP SSJ Gotenks PUR is now struggling to maintain his position among his powerful allies, although he provides an invaluable double Offense boosting Z-Ability, which nearly assures his spot on the bench for the foreseeable future.

On this Team's Core, Gotenks directly competes with this Tag's strongest Fighter, SP Super Vegito PUR. He can function very well alongside SP Super Gogeta GRN and SP Gogeta BLU, who are also Blast-oriented, but internal synergy isn't enough to save his lackluster toolkit. He belongs on the bench.

SP SSJ Gotenks PUR is an extremely high-powered Offensive Fighter with an emphasis on Blast Attack via his stats and his two Blast Arts Cards.

However, his Strike Attack is also reasonably high, making this Equipment unbelievably strong for him if used in a Hybrid Saiyan Team. Otherwise, the regular "!!!" is just fine.

This Equip has a possibility of getting either Strike Defense or Blast Attack in the last slot. SP SSJ Gotenks PUR will take either one, but even more Blast Attack would be ideal and sends his Blast Attack to sky-high levels.

SP SSJ Gotenks PUR is Blast oriented and his toolkit is based around his Special Move.

SP SSJ Gotenks PUR never really saw consistent play even on release, but he’s found a nice spot as a bench for one of the most popular Teams in the game.