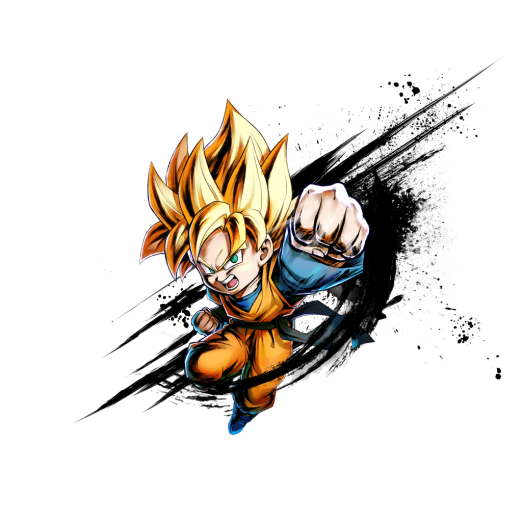 SP SSJ Kid Goten GRN was introduced to Dragon Ball Legends at the same time as his best friend, SP SSJ Kid Trunks YEL, so it’s not so surprising that they compliment each other. But these two were straight up made for each other.

In terms of play style, he should only start the match if SP SSJ Kid Trunks YEL is not on the Team, due to his Blast Arts Card Killing Main Ability.

While he is a bit one-dimensional in terms of playstyle, it fits him very well since Hybrid Saiyan Teams are heavily Strike-centric. His held Strike Arts Cards and multiple Strike Attack Boosting Abilities make any blow he lands leave the Enemy in a world of hurt.

Attached at the Hip

While it’s completely possible to play SP SSJ Kid Goten GRN and SP SSJ Kid Trunks YEL on a Team without the other, they are most effective together.

The problem is that this makes any Team with both highly predictable. Enemy Players will know to expect the Match to start with a heavy onslaught of Ranged Attacks before all those Blast Arts Cards are re-shuffled into the deck for a potentially knockout dealing Strike Attack.

In PVE this duo is nigh unstoppable but in PVP this Synergy is a target for equally strong counters.

The Sharpest Knife in a Gunfight

The same thing that makes SP SSJ Kid Goten GRN a powerhouse also makes him especially predictable. If a player is willing to swap in this Fighter it signals they are done dealing Blast Damage--doubly so if he activates his Main Ability. The Enemy now knows to whip out a Strike sponge or save Rising Rush to stop SP SSJ Kid Goten GRN in his tracks.

This Fighter’s Defenses, namely his Blast Defense, are very weak. He can’t afford to take many--if any--hits whatsoever in this current Meta.

All signs point to this Team Build. There are tons of Z-Abilities in this Tag, not to mention his own.

There are plenty of Trunks variants to choose from in order to fulfill SP SSJ Kid Goten GRN’s Primary Unique Ability requirement. This also sets up for some interesting GGY or YYG Double Color possibilities.

The Ranged Fighter count in this Tag is slim with enough Blast Arts Cards among them to optimize his Blast Card killing Main Ability without it becoming a hindrance to the Team. The only problem with this Build is power creep. There are way better options now, so there's no guarantee that he will make the cut.

This Tag is considerably larger than Hybrid Saiyan and therefore supplies more SP Fighter options. It also lacks many Blast Focused Fighters, so his Main Ability isn't a huge con for this Build either.

SP SSJ Bardock BLU has breathed new life into older Super Saiyan Fighters, and as such can make SP SSJ Goten GRN the truly terrifying Offensive Fighter he once was.

An exceptional all-out Offensive choice, although “Awakened You Can Do It, Right Gohan?” would be the superior option if he’s used in a Son Family Team.

An excellent and mandatory choice for any Offensive Fighter used in a Hybrid Saiyan Team.

SP SSJ Goten GRN has been thoroughly power crept and provides nothing to a Team besides a nice Z-Ability at 5 stars.