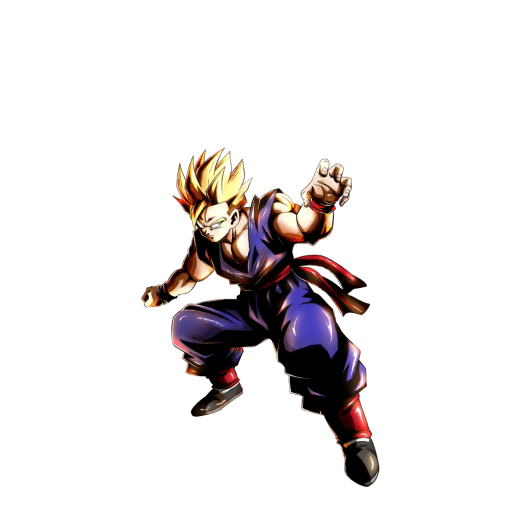 SP Super Saiyan Gohan GRN is an unassuming Offensive juggernaut of a Fighter; he greatly expands the options of the Hybrid Saiyan Tag and boldly codifies its relevance in the Metagame. Gohan is a simple yet effectively designed Fighter that can fulfill a number of roles during the match.

At the start of the Match, he acts as an Offensive Supporter for his Hybrid Saiyan Allies, and as Timer Counts elapse, he gathers more and more Offensive Buffs via his first Unique Ability. SP Super Saiyan Gohan GRN even gets access to a Substitution Count reducing Special Arts Card that lets him keep his Team’s pressure on.

All of this equates to a strong Supporter with additional Crisis utility should the situation call for it.

A Teacher Who Can Walk the Talk

SP Super Saiyan Gohan GRN’s Buffs to Hybrid Saiyan Allies activate when he enters the battlefield alongside a self-buff to Card Draw Speed, letting him utilize his own buffs to great effect. When his Main Ability’s Damage Buffs and his Hybrid Saiyan Damage Buff are active at once, SP Super Saiyan Gohan GRN is capable of dishing out absurd Damage, even against Purple Fighters.

Cool in a Crisis

Thanks to his Unique Ability’s gradually accruing Damage Buffs, SP Super Saiyan Gohan GRN can hold his own stunningly well in single combat situations. The Buffs he accumulates as the battle progresses are invisible as well, letting Gohan excel as a Last Man Standing, even against Fighters that typically counter Crisis Abilities.

The way his kit was built greatly restricts his possible Team builds, which is a shame because all of his Tags would have appreciated an Offensive Support Fighter as powerful as SP Super Saiyan Gohan GRN.

Hybrid Saiyans as a Tag does not lack for strong Crisis Fighters, and considering Crisis utility is one of SP Super Saiyan Gohan GRN’s few functions, his place on a Team could be considered redundant. That being said, having multiple Fighters with Crisis utility can be a benefit depending on the progression of some matches; the issue lies in the number of Crisis Fighters reaching a point of diminishing returns.

SP Super Saiyan Gohan GRN can be used to great effect on this Team, assuming his two teammates are both Hybrid Saiyans. If he is used alongside Goku Fighters, his potential to act as Offensive Support will decrease, so it is best to use Gohan alongside Fighters who fit on both the Son Family Tag and the Hybrid Saiyan Tag.

He'll primarily be used on Hybrid Saiyans, and this Equip has very high stat boosts for every Hybrid Saiyan ally.

He's primarily a Melee Fighter and has problems with durability.

Simply put, he gives nice Support to his Teammates and his Strike Attack is good. Once his Zenaki hits, he'll be able to slot into two excellent teams in Hybrid Saiyans and Legends Road.