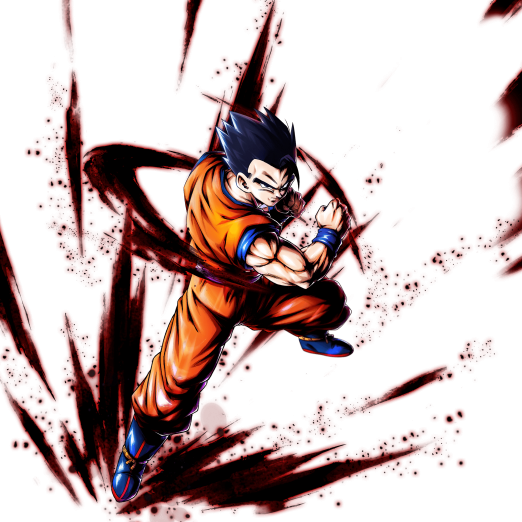 SP Ultimate Gohan GRN took quite a while to unlock his full potential in Majin Buu Saga Z, a wait similar to his anticipated release in Dragon Ball Legends. He’s finally arrived and not only brings some decent Offensive stopping power but arguably the best Cover variation in the game.

Similar to SP SSJ Goku GRN, SP Ultimate Gohan GRN  has access to Cover: Rescue. This completely negates any Damage received, once--including incoming an Rising Rush. He also gains another chance to use it when he activates his Main Ability, which also draws a powerful Ultimate Arts Card.

If that wasn’t enough, every time SP Ultimate Gohan GRN evades an Attack with Vanishing Step, he draws two Extra Cards (activates twice). His Extra Move effects stack and don't expire once they are activated.

Offensively, he’s capable of ramping up to good Damage, but is also shifty enough to make up for his pourus Defense.

Get Out of Jail Free

Cover: Rescue is simply one of the best Defensive Unique Abilities in the game, absorbing any Damage whatsoever when cover switching. This puts immense amounts of pressure on the opposing Team, as it forces them to play around this when planning large Combos and Rising Rushes.

He also gains another activation of this when he activates his Main Ability, giving him another chance to cause a massive and potentially game-ending momentum swing.

SP Ultimate Gohan GRN’s Extra Move is stackable and the effects won't expire once they are activated.

While drawing Extra Cards might seem difficult to plan around, SP Ultimate Gohan GRN draws one the first two times he uses Vanish Step, while also Buffing Strike Damage with every Vanish Step.

On top of getting another activation of his Cover: Rescue when he uses his Main Ability, he also draws an Ultimate Arts Card.

This mechanic remains one of the best things an Offensive Fighter can have, especially considering SP Ultimate Gohan GRN’s Ultimate Move does so much Damage while also Reducing the Enemy’s Ki.

Drawing an Extra Card the first two times he uses Vanish-Step definitely goes a long way in Boosting his Damage for the entire duration of the Match, but this can also become very clunky if he happens to draw one in the middle of a Combo, effectively ending his Damage output early at that moment.

While he does have arguably the very best way to avoid taking Damage without even being a Tank, when his Covers run out, he is very susceptible to taking a beating. His Health stat is not too great, but his Defenses are even worse. Because of how susceptible SP Ultimate Gohan GRN is to Buff removal, his Offenses are equally as fragile.

Cover Rescue allows him to secure some points in this department because of his value as a Defensive pivot, but overall it's difficult to imagine a scenario where SP Ultimate Gohan GRN can withstand more than one Combo.

He does have a good way to Boost his Blast Attack, but it takes quite a while for him to get to that point as SP Ultimate Gohan GRN needs to use his Extra Move three times.

Similar to Hybrid Saiyan, he does have a Z-Ability that helps this Tag, but has been replaced in this Tag by both SP Gohan GRN and SP Goku GRN.

This Equip tends to be a staple for very Offensive-oriented Hybrid Saiyans.

He does have access to an Ultimate Move which already does massive Damage, making that slot especially useful. The Strike or Blast Defense definitely helps as well, considering how fragile he can be.

In the last slot, he'll take either the extra Damage to Regeneration or Health.

A massive Boost in both Offensive categories as well as something to patch up his lackluster Defenses is mandatory here.

For a Fighter that toyed with Super Buu in the anime, SP Ultimate Gohan GRN didn’t live up to the hype. His clunkiness, offputting Z-Ability, fragility, and one-dimensional Offensive output was a death sentence from his release, and he’s now being power crept to boot.

His Z-Ability is not good enough for a bench spot, so he's landing in Tier 5.