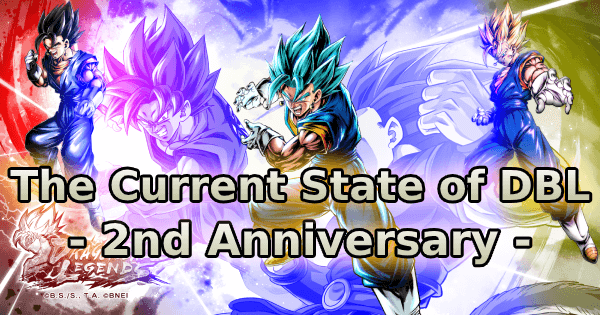 Hi there, Ema919 here! We’re going through the 2nd Anniversary of the Game, so it’s a good time to review the current state of the Game.

In the past few weeks, the Community has been very active about PvP related topics on social media, specifically the “#FixPvP” Hashtag has been very popular on Twitter; this article won’t solely focus on that aspect, but rather it’ll be an analysis of many core elements regarding the Game, in an attempt to point out the pros and cons while also providing some suggestions about how to fix what’s wrong.

Let’s start from the worst part, shall we? First of all, think about what makes a PvE experience good and appealing; specifically, let’s focus on Fighting Games. In these types of Games, facing the AI almost never results in having the same level of emotions the Players feel while facing other humans. That’s mainly because beating a human makes you feel you’re better in comparison to one of your kind. However, this doesn’t mean that competing against the AI can’t be exciting.

Dragon Ball Legends’ AI is… quite frustrating, especially in the hardest levels. This Game’s concept of difficulty is essentially based on making the enemies have very high Stats as well as perfect reaction times, so Players often have to resort to exploits that take advantage of the AI’s deficiencies in order to best it. Technically, this is still a “challenge”, but it’s not a satisfying one, rather it’s pointlessly redundant. It’s hard to make a good AI, even a lot of big games struggle at that, but making it more human-like would be a great first step towards making PvE a good gaming experience.

PvE in this Game also has a diversity problem; in fact, while Dragon Ball Legends has different types of Events, they all have a very similar concept and for the most part the overall experience boils down to being either a mindless spam of Skip Tickets for very grindy Events, or a frustrating series of attempts at exploiting the AI for very hard ones (as explained before).

It’s understandable that Dragon Ball Legends is a PvP based Game, but it’s fair to say that this PvE needs a complete overhaul regardless.

I’ll list the few positives first. The developers have done a good job at diversifying this part of the Game, by adding a lot of different Equips for each Tag, that noticeably impact the Gameplay in different ways depending on which ones you use. Also, Equips have been a catalyst for discussions about deep aspects related to Game Mechanics in the past, so the core concept behind the Equipment System, which is providing the Players of means to enlarge their Team Building possibilities, hits the nail in the head. However, there are a few heavy negatives.

To start with, there are truly a lot of different Equips in the Game and the Inventory’s capacity ( generally it can contain up to to 300-350 pieces of Equips if you invest on it ) just isn’t big enough, resulting in veteran Players having to sell old Equips in order to farm new one , other than making the grind really stressful (navigating through menus countless times because the inventory is full is often enough of a reason to call it a day).

The second problem is probably the most annoying one, namely the Roll system. Even on Equips with great first slots, getting a set of three great Rolls is a hail Mary, especially since some slots’ rolls clearly have lower chances of being high compared to others and the lack of clarity (there is no indicator about the exact probability, neither in game nor in the Database ) about those chances is part of what makes the process frustrating.

That’s not everything, as the Item that allows you to reroll specific Slots on a Item gives you no assurance about getting a better Roll, so players are often stuck in a endless cycle of waste of resources in an attempt to get all the Equips needed for a Team.

Adding an Item that assures you get a higher Roll an compared to the one that’s already on the slot and removing the needless Inventory cap would make the whole experience much better.

I’ll briefly address this since Adventures have been a very hot topic in the past because of how grindy they were. The Developers have made some good moves, by adding 7 hr Adventures, reducing the amount of Adventures’ Items needed to complete missions, and increasing the rewards from Zenkai Adventures.

Overall, there aren’t particularly bad aspects about this System. Sure, setting Adventures isn’t the most satisfying Game experience, but it’s a nice plus nonetheless.

Co-op is technically PvE, but it deserves a different paragraph since it feels like a completely different aspect of the Game.

Gameplay in Co-op isn’t that fun. There is some strategy involved in it, but generally it boils down to being a button smashing experience where you try to defeat the opponent as soon as possible. The required cooperation with the human Teammate is also very minimal. Are these big problems, though? Not really.

At the end of the day, Co-op isn’t a frustrating Game experience, as it’s a fast paced mode that offers some of the best rewards in the game, including F2P Zenkai Fighters.

A tweak that could be done is replacing the Teammate with a AI if he disconnects, but overall Co-op isn’t bad at all and has made the Game better since its first release.

So… yeah, I don’t think there is anything else that needs to be said here.

Finally, the hot topic. Actually, there aren’t many original things to be said here, since the community’s outburst about it in the past few weeks has actually resulted in well thought out criticism and not mindless ranting. It’s true, matchmaking in Dragon Ball Legends is frustrating since players with over 10k RPs of difference can be matched together. This becomes even more of a problem during 2x/3x RPs seasons, I’m genuinely shocked that the developers think these types of seasons are Celebrations worthy, it really shows there is a disconnection between them and the Players. I’m consistently a top 500 player in PvP, I’ve ranked top 300 during the Golden Showdown, and my experience with 2x/3x RPs Seasons has been mostly frustrating and unrewarding.

Ghost inputs are also a big issue, specifically unregistered Tap Attacks and the Dash glitch are potentially fatal in a Meta where losing priority even once really puts you in trouble.

The Ranking System also needs some tweaks. In fact, while the Game pretends you can match with people all over the world, in reality you’re restricted to facing people in your country in order to prevent Lag. This is logical, however what’s illogical is putting a global Ranking to determine the players’ placements each Season. It just doesn’t make sense to compete with some Players ranking wise when you can’t even match against those.This previous point is reinforced by the disparity in RPs distribution, since the Japanese matchmaking in the Game is more beneficial to high rankers since there are more Players having high RPs in JP than in any other part of the World, so a Top Player in JP can generally get way more RPs than a Top Player in Europe for example.

Mods, Lag Switching and such are problems as well, but at least the developers have addressed those recently and are pursuing to ban illicit Players.

While the previous paragraph addressed the technical Problems regarding PvP, this one will be about the Gameplay issues within it. Let’s start with a premise: this is a Gacha Game, powercreep and disparity between Tags is bound to happen, especially during Celebrations.

Recently most of the arguments revolved around SP SSB Vegito BLU. Basically, his presence made most of the Damage Reduction mechanics useless, so the Gameplay became very fast paced and unforgiving in general, even one mistake can be fatal in some cases. This is pretty bad because it made the Game less skill based in general, for a very simple fact, namely the disruption of the adapting process. In slower Metas, adapting throughout a Battle was a key element about the Gameplay, especially in matches between good Players since it resulted in a back and forth of mind games.

Essentially, Gameplay speed and the adapting process are inversely proportional, hence naturally in a fast paced Meta , like the one we’re currently experiencing, there isn’t much adapting, but rather prediction skills ( that come from experience in general ) in early stages of a Match are decisive factors.

But now, let’s go back to the initial premise, namely the unchangeable nature of a Gacha Game. Sadly, sudden Meta Shifts and Meta disparity are things all Players need to learn to coexist with. Throughout its lifespan, this Game had a lot of unfair Metas ( Holy Trinity, 1st Anniversary Fusion Warriors, the invincible Regeneration ), but also a lot of balanced ones. The takeaway is that we really can’t do much about it, so we’re forced to accept the bad periods and enjoy the good ones if we want to play Dragon Ball Legends.

Oof… this was pretty long, if you read through all of this, I’m really grateful. These paragraphs of analysis were both an attempt of providing an objective outlook and a story about my subjective experience with the Game.

Overall, Dragon Ball Legends is pretty decent at what it does, which is providing a dynamic experience to all the fans of the franchise. It could be worse, but it could also be much better, hopefully the developers will start paying attention to the community more in the future.