How Gogeta Affects The Holy Trinity 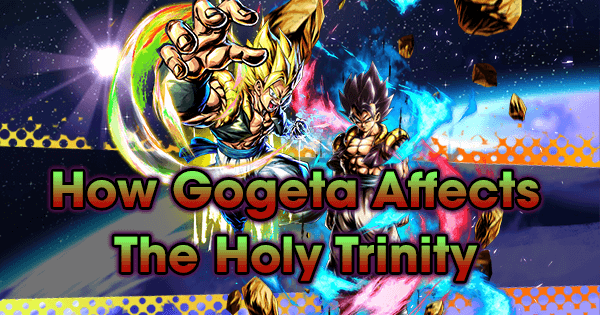 The “Holy Trinity” has been the best Team in the game for a fairly long period of time, mainly due to its extremely high Damage output.

However, the release of more durable and powerful non-Saiyan Teams like Regeneration and Future became a huge problem for the Holy Trinity because its brute force wasn’t enough to beat those Teams, so its win rate in PVP decreased considerably.

SP Zamasu RED, specifically, has been an Achilles heel for the Holy Trinity ever since his release. His multitude of Defensive and Supportive Abilities made his Teams durable enough to outlast the Holy Trinity’s tremendous Damage output.

While SP Gogeta BLU doesn’t bring Defenses that the Super Saiyan Team needed, he can melt SP Zamasu RED thanks to his incredibly powerful Offensive toolkit.

The question this article will try and answer is: is the addition of SP Gogeta BLU is enough to make Holy Trinity one of the best again?

How Does He Fit In?

So basically, the new SP Gogeta BLU replaces the older SP Super Gogeta RED. The cards available change a bit due to all three holding Mixed Arts Cards, creating a completely balanced deck. This isn’t a problem as the Team’s Damage output is one of the highest in the game regardless of which card is used.

That doesn’t mean this Team has nothing to fear--the lack of a Defense Fighter and a Team Healing Ability is still a problem and leaves almost no room for error. However, it’s worth noting that both SP Gogeta BLU and SP SSJ Broly PUR are tremendously strong Fighters on their own with good Defensive base stats. And even if there is no Team-Healing, every Fighter has some form of self-Healing.

Holy Trinity vs. The Meta

The predominance of Blue Fighters in the Holy Trinity will make SP Piccolo GRN a frequent replacement for SP Zamasu RED, which makes the Matchup far more bothersome. While the former lacks a high Damage output, he’s the best Tank against SP Gogeta BLU.

It's also worth noting that SP Perfect Cell YEL has all the right tools to effectively counter SP SSJ Broly PUR.

So how can the Holy Trinity overcome its struggles? Well for starters, despite the disadvantages in this matchup, SP Zamasu RED not being there with his annoying resurrection effect will make Rising Rushes more effective against those still in the core.

Secondly, SP Gogeta BLU’s Special Move can wipe out every Fighter on the Enemy Team who isn’t SP Piccolo GRN and it’s only fitting that it can inflict a No Switching effect that prevents his Cover.

Alternatively, if the Enemy is brave enough to use SP Zamasu RED in this matchup, it becomes much easier for the Holy Trinity as both SP Gogeta BLU and SP SSJ Bardock BLU can quickly beat him.

All in all, while the Holy Trinity lacks a bit of consistency in this matchup, it can perform well against the arguably best Team in the current Meta.

This Matchup is very similar to the Regeneration’s, with the difference being that Future doesn’t have a reliable Tank other than SP Zamasu RED and its Green Fighter, SP Mai GRN, is Support Fighter with average Offense and Defense, so she won’t effectively counter SP Gogeta BLU.

Despite these factors, Future remains quite bothersome Team because of Team-Healing and Buffs. In a battle of endurance, the Holy Trinity will almost always lose to this matchup.

To win, it’s important to take out SP Mai GRN as quickly as possible, as she is a vital resource for her Team. But this is easier said than done since top Players are clever enough to keep her out of harm's way, for the most part.

SP Mai GRN is also annoying due to how quickly she can collect Dragon Balls. High Ki Recovery Speed, low Card costs, and fast Arts Cards Draw Speeds mean her Team is likely to beat the Holy Trinity to a Rising Rush.

In this regard, starting the game with SP SSJ Broly PUR is often an effective Tactic as it forces the enemy to switch SP Mai GRN out early.

All in all, the result of this Matchup often depends on which Team can take advantage early on.

Against Son Family and Hybrid Saiyans

Against Son Family and Hybrid Saiyan Teams, it’s a battle of brute force. The Blue Color Counter Build is advantageous against SP SSJ2 Youth Gohan RED, however, his color disadvantage removal effect in his Main Ability is potentially deadly, so he must be taken care off before his Damage Buffs him turn into a death machine.

The Sagas Warrior’ Matchup is favorable, because this Team is basically the Holy Trinity without SP SSJ Bardock BLU, which makes its Damage output considerably lower.

Female Warrior has SP Mai GRN, which is bothersome, but their durability problem is a huge weakness against the Holy Trinity.

How Good is Holy Trinity Now?

Essentially, the Holy Trinity Build now has better counters against the Top Teams in the Meta. Its Damage output is one of the highest--if not the highest--and the shortage of direct counters improves its durability. Although, the lack of Team Healing is still a problem.

It’s safe to say that this Team is good enough to compete at high levels in PVP, but Future and Regeneration are more balanced and consistent, so they remain better in general.