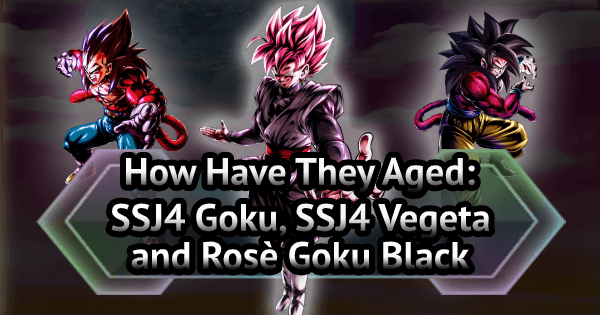 This series focalizes on analyzing some old Fighters, in order to give a perspective on how good they are in the current Meta. The main objective is reaching a conclusion on whether it’s still worth to pull for those Fighters or not, however this series can be interesting even for those who already own them, but still want to know how good they are in their optimal Teams.

SP SSJ4 Goku PUR was released in the Christmas Step Up Banner, alongside with other GT Fighters that originally made that Tag incredibly strong in PVP. As things stand now, GT isn’t one of the best Teams anymore, as the most recent releases have been quite underwhelming, but SP SSJ4 Goku PUR can still shine if paired with Saiyans in general.

In particular, SP Saiyan Saga Goku BLU is a perfect comrade for him, as he makes his Teammates Draw Cards when switching out, which combines very well with SP SSJ4 Goku PUR’s Ki Restore on switch. Also, SP SSJ4 Goku PUR’s Z-Ability manages to Buff the former through the Son Family Link.

In general, practically speaking SP SSJ4 Goku PUR is an essential Fighter for any Saiyan Team, as he’s consistent both Offensively and Defensively right off the bat, while the same can’t be said for others like SP Bardock RED or HE Shallot LIG, who can’t always perform at full potential due to their transformations’ restrictions.

This Fighter also sees some use in more niche Teams like Son Family, where he pairs up quite well with SP SSJ Youth Gohan YEL due to both of them being Strike Based ( Which makes the Deck ideal ). However, this Tag just isn’t as good as Saiyan due to lacking great Ability Bonus.

All in all, this Fighter makes his Teams much more balanced, but he can even be looked at as the ace, since his peak Damage is still enormous and his Ultimate Move is a nuke. If you’re looking to make a great Saiyan Team, it’s probably still worth to pull for him as it doesn’t look like he’ll be powercrept any time soon.

Unlike his historical rival, SP SSJ4 Vegeta RED isn’t used on Saiyans anymore due to SP Bardock RED pushing him out. This means that he’s only used in GT and Vegeta Family, which limits his current place in the Meta.

In fact, while SP SSJ4 Vegeta RED is still one of the best Offensive Fighters in the game, his weaknesses are apparent, so he needs a proper Top Tier Team around him to hide those and make him shine like in the good old days. Primarily, his Defense is truly horrible, and considering there are fantastic Offensive Fighters such as SP Android #21 PUR who don’t necessarily trade Defense for Offense, this Fighter already looks a bit outdated compared to the time of his release.

Looking at his Team’s performance, GT isn’t bad at all, in fact it’s a quite good Team, just not at the same level as the likes of Sagas Warriors and Regeneration, since the lack of color variance hurts it. In particular, the Team could’ve used a better Yellow to counter more effectively strong Purple fighters such as SP Android #21 PUR, who is dominating the Meta right now. While SP Syn Shenron YEL is a great Tank, his ineffective Offense makes the Team much slower than it should ideally be in the current Meta.

Things become worse when looking at Vegeta Family, an Ultra Offensive Team that lacks any sort of Defensive proficiency ( To explain practically, most Fighters on this Team get almost one-comboed really easily ), which makes it relatively easy to outlast in the current Meta.

Overall, SP SSJ4 Vegeta RED isn’t a must have Fighter right now, but he’ll probably become relevant at high levels again once one of his Teams raises in strength.

This Fighter is in a very similar situation as SP SSJ4 Vegeta RED, in the sense that he is very important in two Teams that aren’t among the best ones in the Meta.

However, in general his kit has worsened over time, specifically his Support is less Effective now as some Meta Fighters can Remove Debuffs easily, or even worse they’re immune right off the bat.

That said, SP SSR Goku Black RED is still a quite complete Fighter that would look great if God Ki were even a little bit better. The Team’s main problem is that its best Fighter, namely SP SSB Vegeta GRN, has a color that is suffering right now in the Meta due to SP Android #21 PUR and SP SSJ4 Goku PUR running rampant. This thing exposes the rest of the issues, like the Team not being Offensive enough early in the Match. God Ki is still a good Team of course, but just like GT it lacks the consistency of the Top Meta Teams.

Future as a Team is improving, but it’s not good enough to even be comparable to S/Z Tier Teams. SP SSB Vegeta GRN’s addition to the Tag was much needed, but the Team still needs better color variance and Ability Bonus. It’s worth noting that new versions of Trunks and Cell got leaked in the latest V-Jump magazine, so things could start to sharply trending up for the Tag.

All in all, the outcome is the same as SP SS4 Vegeta RED’s here, you don’t strictly need SP SSR Goku Black RED, but he’ll still probably be a very important part of his Teams in the future once they get stronger.