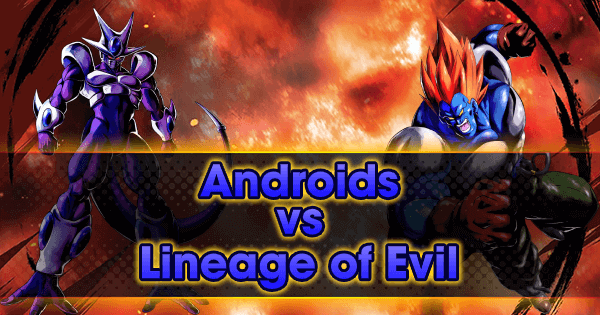 Sometimes there are rivalries that take place only because of the current Meta situation, and not due to canonical reasons. Androids vs Lineage of Evil is, in fact, a clash that never happened in the Dragon Ball Manga, but since both are very strong Tags currently, they face each other quite frequently in the PvP scene.

To set a bit of a background, Lineage of Evil was at the pinnacle of the Meta, so other any other Teams had to matchup at least decently against it, in order to be defined “Top Tier”. Fairly recently, Android has been one of the few Tags that met those conditions, arguably exceeding them too, as many players now look at Androids as the actual strongest Team.

Androids are a versatile Team. In fact, they have access to each Color in the Game on their Core, so they can adapt to any situation flawlessly. In particular, against Lineage of Evil, SP Fusion Android #13 RED, SP Android #17 PUR, SP Super #17 GRN and SP Android #14 GRN are very popular options, with SP Perfect Cell YEL finding usefulness if he can avoid SP Final Form Frieza RED

While Green used to safe choice against Lineage of Evil, since the latter didn't have a good Purple, Lineage of Evil now has a the forceful presence of SP Coora PUR. While Purple for Android is a great idea in order to prevent SP Golden Frieza GRN from feasting, both Purple Android options must stay away from SP Full Power Frieza YEL, as the Galactic Emperor can control the field from Blast range quite easily.

How does the Match play out? Androids, taking advantage of either of the Tanks they’re using, must try to tire Lineage of Evil out by letting Timer Counts elapse and aiming to defeat SP FF Coora BLU by unleashing SP Android #14 GRN . On the other hand, Lineage of Evil has to try to remove the opponent’s Tank relatively early -- even recurring to a Rising Rush. In that situation -- the matchup becomes considerably easier for them, since they thrive in situations where the opposing Team has no safe-switches.

Overall, if by the time 60 Timer Counts have passed Androids have still three Fighters alive, they are in an advantageous situation to conclude the Match with a victory. Otherwise, Lineage of Evil becomes considerably harder to handle, and the Match could go either way.

These are two of the strongest Teams in the Game. As such, their 1 vs 1 matchup is quite even. However, Androids have the benefit to set up an incredibly optimal Color wheel, so it’s fair to say they have the edge.

Also, considering their overall place in the Meta, it’s clear that Androids are a bit superior as a whole, considering that their Color variance makes them absurdly diverse, while Lineage of Evil has only on just enough amazing Fighters to fill out a Color wheel, they’ve become quite one-dimensional, although they’re still very good.

Thoughts on our analysis? Sound off at https://community.gamepress.gg/