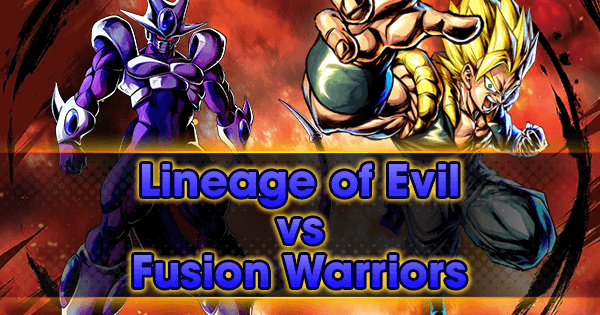 There has always been a bitter rivalry between Saiyans and member of the Frieza race in the Dragonball Universe. In-game, Saiyans have often been protagonists of the most popular Teams, while Lineage of Evil has always been considered the saviors who could end those “monkeys” reign.

Fusion vs Lineage of Evil represents the previous description perfectly, since the former was absolutely shredding the Meta after this game’s Anniversary, until the latter got a new addition that made the Team considerably more competitive and also a perfect counter against Fusion.

During the Anniversary, there was almost no comparison between the Team. Lineage of Evil already had the Damage output to bring Fusion down, but their durability was so bad that the opposite scenario was the most likely one. What completely changed the dynamics of this matchup, was the addition of SP FF FP Frieza YEL. Not only the latter is arguably the best Tank in the game, he also counters Fusion’s best Fighter -- namely SP Super Vegito PUR -- by color. This fact alone changed things completely, as the risks of running SP Golden Frieza GRN mostly disappeared. Yes, he can still get one-combo-killed by SP Super Vegito PUR, but at least he now has the best cover possible to guard him.

The matchup goes like this: in order to win, Fusion absolutely must control the early game, since most of SP Golden Frieza GRN’s Offensive power goes away after 60 timer counts, and generally Lineage of Evil’ strength depends on all the three Fighters being alive. So Fusion should limit the Damage received in the early game, just to strike back once its Fighters’ Main Abilities charge up -- Especially SP Vegito RED’s is important to lock SP Golden Frieza GRN in and finish him off with SP Super Vegito PUR.

On the other hand, Lineage of Evil’s managing to land some Combos right off the bat might make things ugly very quickly. Having SP Golden Frieza GRN and SP FF FP Frieza YEL magnified by SP FF Coora BLU’s Buff, means that Lineage of Evil can inflict loads of Damage whatever Fighter Fusion puts in. Defeating SP Super Vegito PUR should be the main aim, however disposing of SP Vegito RED is good too since in that scenario SP FF FP Frieza YEL becomes the best Fighter on both Teams.

Overall, both Teams have the means to beat the other, with Lineage of Evil being a bit more consistent thanks to SP FF FP Frieza YEL.

Let’s put things straight, Fusion is still an overwhelming force in the meta. The sole fact that it manages to compete so well against a Team built to counter it, speaks volumes for Fusion’s strength.

Fusion Fighters have some of the most terrific Offensive toolkits in the whole game, alongside with frustratingly good utility -- Attribute Upgrade removal, Lock-in-- and incredible Z-Abilities that make them very consistent

However, in this specific matchup Lineage of Evil emerges victorious, which is a verdict that reflects the current PVP season well, since many people in top 10k are successfully running this Team.

Ultimately, this rivalry is healthy for the game, since Fusion is not as unstoppable as it was anymore.