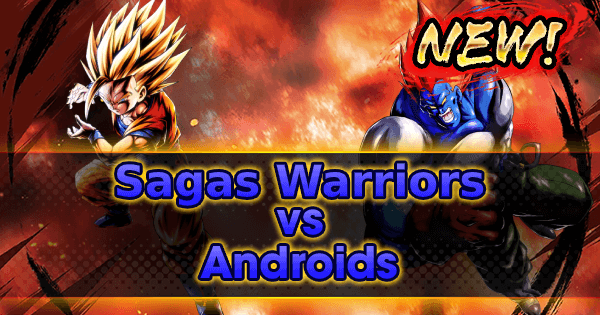 Android vs Sagas Warriors is one of those rivalries that is generated due to how powerful these entities are in the game, and not due to canonical reasons. While some Androids have appeared in Dragon Ball Movies, that’s not enough to call it a historical rivalry.

However, these Tags are interesting enough to make a comparison between them. While Androids might not be as flashy as Saiyans or Lineage of Evil Fighters, they’ve been a staple in the Meta for a long time after having a big drought during the first part of this year. On the other hand, Sagas Warriors feature a big pool of Fighters, including popular choices from basically any Tag.

One thing that they have in common, is that both Tags are extremely powerful and Effective, thus both are contending for the top spot in the Meta. Let’s see who wins in a 1 vs 1 Matchup.

First of all, let’s highlight both Teams’ main characteristics: Android is a very versatile Team, that manages to magnify each of its Fighters thanks to its absurdly high Ability Bonus value, however it lacks a clear Top Tier powerhouse; Sagas Warriors are not a complete Team, it lacks a Red Fighter and its Ability Bonus value is not the best by any means -- There isn’t even a Health Z-Ability --, however practically the Team is very Effective thanks to its Fighters’ gimmicks.

Sagas Warriors has some different possible lineups: some guys prefer placing SP Vegeta BLU on the Team, while some others prefer EX Zangya BLU, however we can say for sure that SP FP Boujack PUR and SP SSJ Youth Gohan YEL will always be on the Team. This fact gives the means to an adaptable Team such as Android to adjust accordingly.

SP Fused Android #13 RED and SP Perfect Cell YEL are basically obvious picks, since it’s obligatory for Androids to both counter SP SSJ Youth Gohan YEL’s early game tankiness, and take advantage of Sagas Warriors’ lack of a Red. The last Fighter could be basically anybody, with SP Android #17 PUR being a bit disadvantaged due to SP SSJ Youth Gohan YEL being able to three-hit-kill him right after Transforming.

While Androids can start the Match with basically anybody, Sagas Warriors is encouraged to start with SP FP Boujack PUR to take advantage of his switch-out Buff, thus it might be favorable for Androids to start with SP Perfect Cell YEL.

The Matchup will be decided by some specific moments in the Match, one of those is SP SSJ Youth Gohan YEL’s lock-in, Sagas Warriors’ side could use that to dispose of SP Fused Android #13 RED with a Rising Rush -- Effectively taking out Androids’ most bothersome Fighter -- or simply to defeat any Androids’ Fighter to generate a 3 vs 2 situation. In any case, that’s a big danger for Androids and quite an unavoidable one. What Androids can do is to not let Sagas Warriors have control of the Fight before that gimmick and they have the tools to achieve that, benefitting from a better color wheel and massive Damage output thanks to the high Ability Bonus.

It’s really that simple, if Sagas Warriors manage to hold their own for a while, just to take decisively swing the momentum once SP SSJ Gohan YEL transform, they will probably win. On the other hand, if Androids manage to take advantage of their advantageous setup  excluding gimmicks, they have a great chance.

This matchup is as 50-50 as it gets. While it’s difficult to declare a clear winner for this specific Matchup, looking at the Meta as a whole makes things a bit easier.

Androids just have more options overall. While it could be argued Sagas Warriors’ gimmicks give them an advantage in any matchup, there is a specific thing they can’t really counter, namely SP SSJ Youth Gohan YEL. Ironically, their most interesting weapon is also their worst enemy, they just have no way to counter him due to their lack of a Red Fighter. For this reason, Hybrid Saiyan and Son Family matchups are more problematic than they would normally be for them.

Androids don’t have this problem, they can still adapt to any matchup with relative ease, thus they ultimately win this matchup, maintaining their state of supremacy over the rest of the Meta.