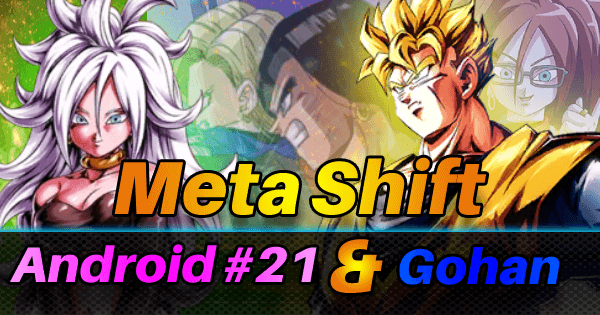 Not even a month after the Christmas Step Up Banner, here it comes another Step Up featuring a new LF,  this time it’s SP SSJ Gohan YEL from the Future arc, a quite interesting choice since he didn’t really have any iconic moment, but he’s a beloved character nonetheless, so it’s acceptable. Alongside him SP Android #21:Good GRN got released as well, and while she doesn’t fit with Gohan, a new Fighter with her Tags felt much needed.

However, dismissing this Banner's value for a second,  Dragon Ball Legends is taking a weird route. In the last three months, there have been four Step Up Banners with four new LFs, and two of those got released at the same time. In between, there has been barely any other new release, with Zenkai Banners filling the weekly banner slots. These things, coupled with the fact that the Step Up system got significantly nerfed, made pulling for any new unit extremely inconvenient for any f2p player in the past few months, especially since Zenkai Fighters are dominant in today’s Meta. That said , while it’s really impactful, for many players Zenkai isn’t exactly an appealing mechanic, which is understandable since it’s basically a sizable expense for a buff to old units with outdated animations, but without investing in it, there is almost no way to compete in PvP.

It might be possible that DBL backed itself into a corner with Zenkais, and while the situation is somewhat stable now, players’ dissatisfaction is growing on a daily basis and we might be approaching the point of no return, if nothing changes.

Rant over, let’s go back to the new Fighters’ analysis, with a focus on SP Android #21 BLU as well that got a free Zenkai this week.

Let’s talk about the new LF first. SP SSJ Gohan YEL has a pretty balanced kit. He doesn’t excel at anything, but he’ll rarely feel like a deadweight because he can do most things decently.

His Damage Buffs become quite high really fast, and they can become potentially higher as he gets hit, but even considering his Arts Draw Speed his Damage won’t be high since his Offensive stats are quite low. Defensively, he offers really nice mechanics, like Card Destruction on Cover which is really nice to end Combos, and Endurance, but him lacking consistent Healing sources and high Damage Reduction Effects still makes his durability a bit inconsistent. His Support is pretty nice - although he needs to get hit in order to Buff allies by a considerable amount - , but it doesn’t nearly reach the same heights as natural Supports like Vados. Overall, he’s the perfect representation of “Jack of all trades, master of none”, or in Dragon Ball Legends terms, he’s effectively a weaker Toppo - due to smaller stats -.

So, where does he fit in the Future landscape? Primarily, the Team needed a good Yellow Fighter, as SP SSJ Rage Trunks YEL started feeling outdated a long time ago. Secondarily, as far as Team fit goes, since he’s pretty versatile he synergizes with any other Fighter on the Team pretty well. Specifically, his Defensive utility being quite obnoxious makes him an interesting partner for SP Perfect Cell (Revived) RED and SP SSB Vegeta PUR, two Fighters that, just like Gohan, make it hard for the opponent to find windows to safely gain advantage with Rising Rushes and Ultimate Moves.

However, Gohan still falls short compared to most Zenkai Fighters, so he doesn’t change the state of Future significantly enough for it to go up a tier in the Meta.

Conversely, Android has been improved dramatically. First things first, finally the Team has a strong Blue Fighter - SP Android #21 BLU - to shield SP Android #18 YEL, which has arguably been the most threatening Offensive Fighter in the Game since release if taken singularly, but the lack of an ally that could protect her from the likes of SP SSJ2 Gohan RED and SP Super Gogeta RED limited her realistic potential in the Meta. Also, SP Android #21 BLU is a really strong Support, he provides 50% Damage Support to her, plus other Damage increases through Debuffs to opponents, reaching amounts of additional Effects that are basically unmatched in today’s Meta. On her own, she’s a pretty strong Fighter as well thanks to her Zenkai stats.

The competition for SP Android #21:Good GRN is much harsher than her Blue variant’s, as SP Android #16 GRN was still doing pretty well for the Team overall. Compared to him, she’s a much more Offensive Fighter for the Team, while she doesn’t have nearly the same Tankiness. So, is the trade worth for the Team? It’s close enough to be subjective, but 21 fits the current state of the Meta better, where Tankiness doesn’t mean much compared to high Damage potential. The reason is, the Top Tier Teams’ Damage output has gotten so high, that even Fighters with high Defenses and Damage Reduction can’t consistently Tank hits anymore. SP Android #21:Good GRN is overall a fantastic non-Zenkai Fighter, with a kit that fits the Team well, and she also synergizes perfectly with the other 21, so she’s a really strong option for the Team.

Speaking about 21s, SP Android #21:Evil PUR is back, as the Team still lacks a recent purple option. The old queen of the Meta benefits a lot from SP Android #21 BLU’s Support, just like during her prime, and seeing how her stats and kit are still pretty decent, she became a nice option again.

Just like for Androids, SP Android #21 BLU is a game changer for the Team, providing both some much needed Support and protection against SP Super Gogeta RED and SP SSJ2 Gohan RED. As a result, Fighters like SP DK Piccolo YEL and SP Piccolo YEL become much safer, so Regeneration looks like a totally different Team.

Truth be told, Regeneration has always been a Team that could clash with any Team that lacked a great Red option, since its ability to control Matches through constant Heals, Lock in Effects, Dragon Ball Stealing Abilities, and huge Damage potential, made it an objective threat. Now that the Team has a full color wheel, it becomes hard to stop.

SP Anrdoid #21: Good GRN can replace Buu, but she’s not better than him overall. She’s just a pretty great option if you want to use SP Piccolo YEL, but her synergy with SP DK Piccolo YEL is really bad as he really dislikes using Blast Cards.

It’s basically mini-Android, with Android 18 and the two new Android 21s being staples, while SP Android #21:Evil PUR is more of an alternative option. The lack of Cell makes this Team’s color-wheel worse, but overall it still shares a lot of Android’s advantages over the rest of the Meta, namely the capability to completely dominate Matches through very high Damage ceiling that is incredibly easy to reach.

Gohan can fit in this Team, however SP Goten YEL might still be the better option. The youngest Goku’s son offers better Support to the whole Team while still being really good at doing Damage and quite decent at Tanking as well. Gohan is still a Jack of all trades, but he just fits worse than Goten considering he doesn’t synergize well with a Blast based deck.

The Banner mechanics are really bad, however the fillers in this Banner are really good. The LF of this Banner doesn’t really change the landscape of the Meta, but Android #21 is an important option in several really strong Teams, so if you want to pull for her then do it, considering Fighters like SP Perfect Cell (Revived) RED and SP Goku Black GRN  are featured as well.