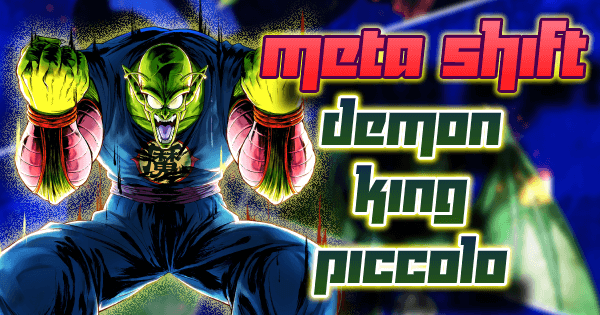 With a Step Up approaching us, this week we received the Zenkai Awakening of one of the most iconic villains of Dragon Ball, namely Demon King Piccolo. The namekian is relevant in a Team that was just waiting for an incredible Fighter to step up in the Meta ( Regeneration ) and another who is basically dead in the water due to its very short and outdated roster of Fighters ( Dragon Ball Saga ).

His rival SP Kid Goku YEL already got a Zenkai that made him one of the best Fighters in the Game months ago, let’s see if SP Demon King Piccolo YEL can reach an equal status, just like in the manga.

Since this is the Tag he Buffs through Z-Ability, Regeneration is Demon King Piccolo’s Main Team. What does he bring to the table? Fantastic Offense and Dragon Ball Manipulation capabilities. Is this what Regeneration needed? Yes, as the Team was starting to feel a bit slow Offensively, considering SP Fat Buu GRN and SP Super Baby 2 BLU are basically non factors Damage wise for the most part, while SP Omega Shenron RED and SP Evil #21 PUR were limited by the terrible Meta situation for Regeneration.

SP Demon King Piccolo YEL is just a perfect addition for the Team, as he can inflict deadly Damage to 90% of the Fighters in the Game. This level of oppressiveness often forces opponents to switch out which creates openings for his Teammates. His Dragon Ball manipulation is very annoying on this Team specifically, as Regeneration already had an advantage RR wise thanks to how great SP Fat Buu GRN is at Tanking and recovering Health simultaneously ( although at this point in the Meta he might need higher Zenkai levels to consistently do that ) .

What this Team is still lacking is a great Blue Fighter that can cover the new entry by color, especially considering SP SSJ2 Gohan RED Zenkai is dropping in the near future. In any case, Regeneration currently is one of the best Teams in the Meta again.

In a weird turn of events, Kid Goku and Demon King Piccolo team up to challenge the Meta. Such a combination is only doable in a Yellow Color Counter setup, which isn’t optimal color wheel wise, but it’s the best this Tag can offer. Even then, Dragon Ball Saga doesn’t have very good Blue Fighters, so it’s probably better to pick one from another Tag.

In any case, these two make a very powerful Offensive Combo, also thanks to the  fight there is no Top Tier Red Fighter in the Meta at the moment, so they’re often able to pull off long Combos without risking of being stopped.

Team is not really strong yet, but it surely isn’t as outside of the Meta as it was before Demon  King Piccolo’s Zenkai.

In short, if Regeneration is your main Team, spending 6-7k CC to Zenkai Dark King Piccolo isn’t a bad investment at all. Considering SP Fat Buu GRN ‘s Zenkai Summon is getting overhauled in November, Regeneration will have two top tier Fighters at the expense of 14k CC cumulatively, so the Team is looking quite future proof at the moment.

However, keep in mind that a Step Up is coming, so you might want to wait for that before spending on this Banner.

Is the EX Tier List going to receive an update?
Just wondering how some of the new EX characters influence the game or if they’re…
Why isn’t Vegito an Otherworld Warrior?
I came to this thought some time ago and forgot about it. But now, I just can’t get…
Help me with teams?
I have been away from the game for a while and I was wondering what teams would I be…
The Zenkai Meta is Here!- Dynamic Duo's
ENDING OF AN ERA The Vegito Blue Meta which we had to suffer through has finally come…
Trunks youth
New to game, When will the trunks youth event come back? 1 post - 1…
Read More