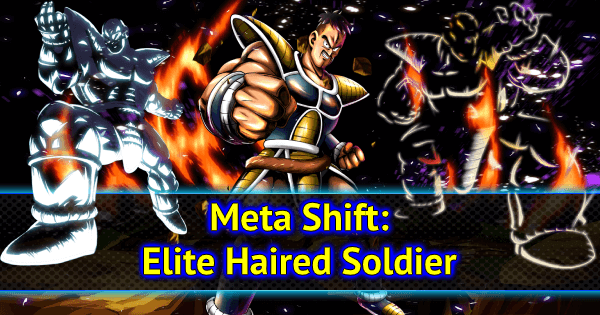 Saiyans have been on the rise lately. With SP SSJ3 Goku GRN and SP Angry Goku BLU getting released in the past two Step Ups, the Tag regained its long-lost synergy. At this point , it’s fair to say that the developers are aiming to make Saiyans great again, in fact they are currently doing great in PVP as a standalone Team. The release of SP Nappa PUR was quite unexpected, but still a welcomed one, since he further strengthens a Team that’s already on the rise.

SP Nappa PUR will probably constantly be on most Saiyan Teams, but he’ll likely rarely see the field. His Supportive Effects are great, and his Main Ability is quite annoying for the opponent, however Saiyan has much better Purple options than him, namely the strongest Fighter in the Game SP Super Vegito PUR. However, his Z-Ability is absolutely amazing, and this will make him a staple on any Saiyan Bench.

Considering how many different Builds Saiyans have, and how popular it is among the fanbase , it’s fair to say that SP Nappa PUR will see a lot of use in the future, just like his comrade EX Raditz BLU. What’s great about him is that not only his Z-Ability is great in general, but also it directly surpasses SP SSJ3 Goku PUR’s and SP SSJ Kid Goku GRN’s, two Z-Abilities the whole player base has always craved.

What Does it Mean for Saiyan?

Picturing Saiyan regaining full synergy is honestly a scary thought. At this point in time, Saiyan is boasting three LF Fighters, two of those having fitting Z-Abilities, and the other one being arguably the best Fighter in the game. Excluding that, the Team has a Health Z-Ability -- Which isn’t a given, considering Teams like Regeneration, Son Family and Sagas Warriors still don’t have it --, and now it has a completely farmable Double Boosting Z-Ability.

The sixth Figher currently is SP Vegito RED, who is needed to cover the Team from Yellow Fighters, however he only Boosts Fusion, thus two Fighters in total on the Team.

Even now, Saiyan is contending for the top spot in the Meta, probably surpassed only by Androids since their Synergy and diversity are massive, however things could very well change if Saiyan gets a final piece to constellate their Z-Abilities package.

@Dragon_DB_Legends
Hey, so you actually seem really knowledgeable and good at the game, so I actually am…
How good are these units?
So i pulled jiren and purple vegeta and i am wondering how good are they know that UI…
Help me with teams? Plees
Screenshot_20201125-215201_DB LEGENDS1080×2400 1.35 MB Screenshot_20201125-215210_DB…
The OTHER Black Friday post (it’ll only make sense if you have read the other one)
Ok so I’m at 1.5k cc now, and it took me an hour and a half, so yeeaaah I’m ok. That…
Black Friday banner
So with the Black Friday banner coming up, I only have about 50 cc. I can grind up…
Read More