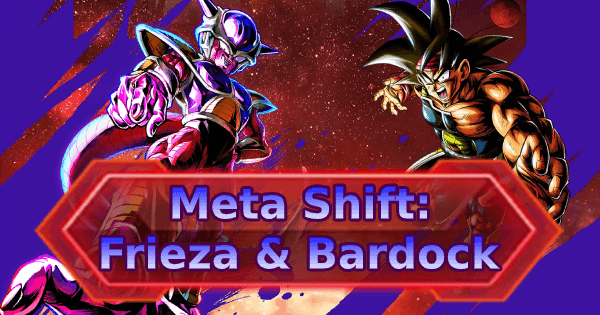 All hail the first villain LF in Dragon Ball Legends! It couldn’t be otherwise after all, Frieza really did a peerless job by exterminating his beloved former allies. Making him company in the new Step Up Banner, SP Bardock RED also joins the fray, boasting a toolkit reminiscent of his glorious old-self SP Bardock GRN.

Last but not least, some of Bardock’s comrades got released in the Banner and as usual they’re EX. The new thing here is that “Team Bardock” got added as a Tag, not that it was needed since all the Fighters in the Bardock Team share the Saiyan Tag, but it’s a nice addition nonetheless.

Overall, we can expect this banner to Boost both Saiyan and Lineage Of Evil, let’s see how it goes.

You’re probably not hearing it here first, but SP Bardock RED is an absolute monster. It might not seem like it at battle start, after all he seals his own Main Ability for a while and he only has a modest 50% Strike Damage Buff at his disposal  to threaten his opponents. However, once he’s able to activate his Main and Transform, he almost inarguably becomes the best Offensive Fighter in the Game -- Which is huge considering that his direct competitor for that role is SP Android #21: Evil PUR -- thanks to absurdly high Offensive Buffs, a nuke Special Move, and a Lock-in Main Ability -- That however also locks him in-- which comes with a convenient Attribute Disadvantage Removal.

In the Saiyan Team, his Red competitor is SP SSJ4 Vegeta RED, who is still an absolute bomb Offensively, but SP Bardock RED is probably straight up better than him in that regard and he’s considerably tankier as well. Also, he fits the Team way better since his Double Held Strike Cards benefit SP SSJ4 Goku PUR as well.

Overall, SP Bardock RED is a must have if you want to run a Saiyan Team, thanks to his dominance in mid-late Game that allows him to have one-combo potential against most Fighters in the Game.

This is a bit tough. Lineage Of Evil is a Tag that had -- and still has-- huge potential to be great, featuring  behemoths like SP Coora PUR and SP FP Frieza YEL that were only waiting for a fitting release to magnify their capabilities. Unfortunately, SP 1st Form Frieza PUR isn’t the one that will bring the Team to the promised land despite being a LF, for the simple reason that he’s Purple, which means he has to compete with SP Coora PUR for a place on the Team. Theoretically you could run both of them in a dynamic Purple Color Counter, but that’s probably not ideal most of the time.

The thing is that SP 1st Form Frieza PUR’s toolkit is really interesting, since he’s a massive Offensive Support with a highly Damaging Ultimate Move, while also being decently Defensive -- in addition, he boasts a Cover that nullifies Strike Cards--. His uniqueness also comes from his Extra Move which basically grants you a free combo if chained to his Cover Effect. Considering SP Coora PUR has some reliable ways to draw Extra Moves, the two of them would pair well if SP 1st Form Frieza RED had any other color --With Blue being optimal, it would’ve really made Lineage Of Evil much better --.

Of course, SP 1st Form Frieza PUR has some weaknesses, like his underwhelming Damage output, but the most glaring problem has already been explained and it really hurts the Team as a whole.

Since this Team doesn’t have SP Coora PUR, SP 1st Form Frieza PUR naturally fits well here. This feels like a consolation prize, since Frieza Force looks like a weaker Lineage Of Evil, but it’s still a good option nonetheless.

SP 1st Form Frieza PUR’s Offensive Support really benefits EX Recoome BLU, whose Damage output is rather low these days. Generally, this Team will probably be a decent Saiyan counter -- Key word, “decent”, since Saiyan is much better than Frieza Force as a Team, despite the latter having a few Anti-Saiyan tools--.

If your aim is to improve your Saiyan Team, SP Bardock RED is a gem you can’t afford to miss, he’s really necessary for Top Tier Saiyan Builds. Preferably, you’d have to pull for SP Saiyan Saga Goku BLU as well to make the best Saiyan Team possible, but SP Bardock RED is already very good on the Team by himself.

Regarding Lineage of Evil and Frieza Force, as explained earlier SP 1st Form Frieza PUR is not what many people expected, but the Banner still features some of the strongest Fighters for these Tags as fillers, so it’s not the worst idea possible to pull here if you like those Teams.