Meta Shift: Frieza Force and Lineage of Evil vs Saiyans 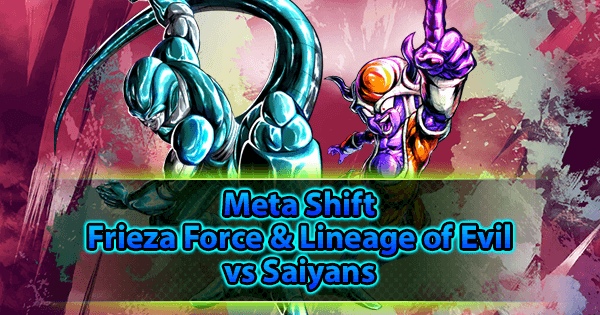 Frieza Force and Lineage of Evil have historically been Tags that specialize in countering the filthy Saiyans in the Meta. Looking back, right after SP FF Coora BLU’s release, Lineage of Evil proved to be an immediate threat for the so-called “Holy Trinity”, which was dominating the Meta back then. On the other side, Frieza Force stayed dry for a while. Nowadays, both Tags have gained reinforcements from the Anniversary’s updates, but are those enough to make Lineage of Evil and Frieza Force valuable Saiyan counters in the current Meta?

Before giving an answer to the previous question, it’s important to state how meaningful it is to properly counter Saiyans in the current Meta. As things stand now, God Ki and especially Fusion Warrior are the most played Tags in PVP by far. Specifically, the latter is extremely oppressive and has multiple win conditions that make it incredibly tough to face. Considering these facts, countering Saiyans means having the upper hand against the two most played Teams in the Meta, which translates into a very good win rate.

Having said this, let’s look into both Frieza Force and Lineage of Evil simultaneously, since they’re pretty similar Tags. Their bread and butter is almost without a doubt SP Golden Frieza GRN. The prideful alien is one of the strongest Offensive Fighters in the Meta, since the Boosts he gets against Saiyans and when coupled with SP FF Coora BLU make him an atomic bomb. Excluding these two, Frieza Force and Lineage of Evil have other good Fighter to counter Saiyans with, such as SP FF Frieza YEL, SP 1st Form Frieza BLU and SP Metal Coora RED.

So, all things considered, are they effective as Saiyan counters? Overall, no. Surprisingly, Fusion Warrior and God Ki can match Frieza Force and Lineage of Evil’s Damage output on a regular basis, even considering the latters’ Anti-Saiyan Abilities. Also, SP Super Vegito PUR and SP SSB Vegeta BLU can seriously mess SP Golden Frieza GRN up thanks to their color advantage, and them being some of the strongest Fighters in the Game overall doesn’t help the alien’s case as a consistent Saiyan counter either.

To win a matchup against either God Ki or Fusion Warrior, Lineage of Evil and Frieza Force must always have the control of the Match, since their low Defense puts them at a high risk against those Tags. In fact, losing either SP FF Coora BLU or SP Golden Frieza GRN makes them much worse, and those can even be defeated in a single combo in some cases.

Frieza Force and Lineage of Evil have the means to beat God Ki and Fusion Warrior in single matchups, however they have to be perfect to pull it off, since their low Defense puts them at a high disadvantage if the Saiyans get the control of the Game. For example, failing a Rising Rush is basically a death sentence for the Saiyan counters. Keeping this in mind, Lineage of Evil and Frieza Force could really benefit from the addition of a more Defensive Fighters, to make them more consistent.