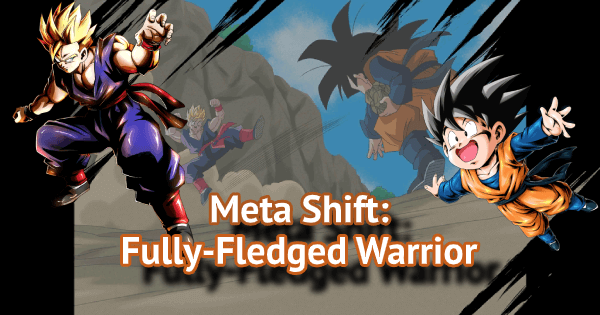 The new update brought us a brand new Gohan from the Majin Buu Saga. The good news is that he’s a Legends Road Fighter, thus he’s entirely farmable. While Legends Road Fighters generally aren’t particularly exciting due to clear flaws in their toolkits, this new SP SSJ Teen Gohan GRN is geared for battle thanks to a rather interesting set of Unique Abilities that makes him both a pretty good Offensive Fighter and a decent Support. Let’s see in depth what his Team options are.

Hybrid Saiyan is certainly the best Team to build around SP SSJ Teen Gohan GRN. In fact, he pairs extremely well with basically any Hybrid Saiyan thanks to his multiple Supportive Unique Abilities that focus on this Tag as a whole. While he’s not the most reliable Offensive weapon right off the bat, he becomes exponentially better throughout the Match.

The most interesting thing regarding him on this Team is without a doubt his Main Ability. When activating it, if any Goten is on the Team, SP SSJ Teen Gohan GRN’s Damage potential becomes truly scary and his Supportive Damage Boost gets up to an astounding 50%.

Something that should be reckoned is his weak durability. Overall, Hybrid Saiyan with him on the Core are definitely squishy. While SP SSJ Youth Gohan YEL is a very good Tank in early game, the same can’t be said for Mid-Late Game situations. This means that this Team’s should aim at gaining control of the Match early rather than prolonging the Battle for too long, so its very good Offensive potential can translate in early victims for the opponent.

While Son Family is a very stacked Team, benefitting from some top tier Fighters even in the Green spot, SP SSJ Teen Gohan GRN is a nice F2P alternative. The latter mainly focuses on Strike Damage, but his Blast Damage isn’t too bad thanks to his overall Damage Buffs , thus this Team’s Blast-focused Deck isn’t that much of a problem for him.

Most importantly, SP SSJ Teen Gohan GRN’s Damage Support applies to some of this Team’s Fighters, making him perfectly viable. He’s kind of similar to SP SSJ3 Goku GRN for this Team, thanks to his decent Damage potential coupled with his Arts Draw Speed and Ki Recovery Boosts that make him able to dish out long and powerful Combos.

However, it’s worth noting that his below average durability is a very apparent flaw on this Team in particular, due to the lack of Defensive and Health Z-Abilities.

All in all, he shouldn’t be seen as a top Core options by any means, but his overall Effectiveness and high adaptability make him a competitive option.

SP SSJ Teen Gohan GRN is what every Legends Road Fighter should be: a decent Meta option that can make up for bad luck.

He has very clear pro and cons that only make him suitable for Offensive playstyles. Luckily, his possible Team Builds all encourage that kind of mindset.

You’’ll surely see him often in PVP, at least in the immediate future.