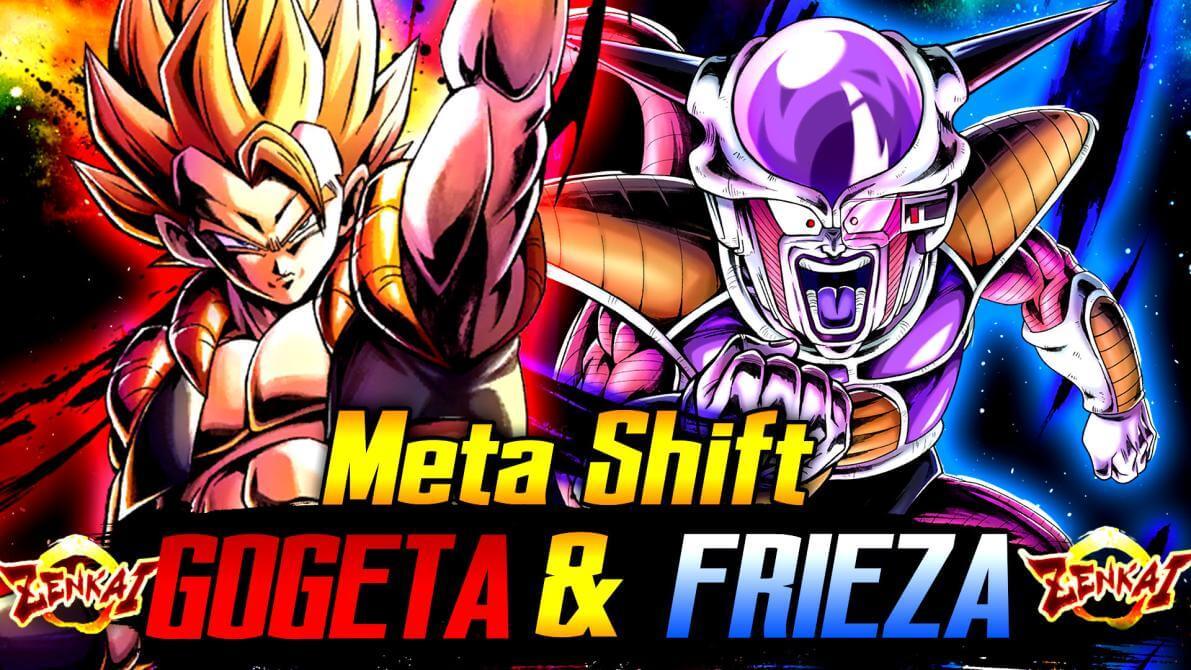 The “Zenkai Land”, that would be a fitting title to represent the current state of PvP. In the past few months, we’ve seen hyped new Fighters be outclassed by reworked old Fighters, even the highly anticipated UI Goku and Jiren, november’s main dishes, couldn’t even compare to the strongest Zenkai Fighters in the game. In particular, UI Goku’s case is particularly funny, as he’s straight up worse than SP SSJ3 Goku PUR Z7, a Fighter he shares colors and 2/3 Teams with.

So, here come SP Super Gogeta RED and EX 1st Form Frieza BLU, the former being a fan favorite eager to enter his prime again, and the latter trying to break the flow of underwhelming EX Zenkais being released in the Game.

Saiyan, alongside Son Family, is probably the Tag that is benefitting the most from the Zenkai releases. In fact, this Tag has such an enormous pool of Fighters, that it basically keeps improving considerably on a monthly basis. Not every Fighter on the Team has fitting Z-Abilities, but since Zenkai Abilities are so great, Ability Bonus is not an issue. The result is a mix of overpowered Fighters that don’t really have any particular counter.

SP Super Gogeta RED is a perfect addition, since RED is a color Saiyan was lacking and it was quite apparent, since SP Android #18 YEL could easily feast on the Team. He’s also mainly a Strike focused Fighter, so he fits the Team well alongside the likes of SP SSJ Bardock BLU and SP SSJ3 Goku PUR. Much like the latter, he has explosive Offensive capabilities, and fearsome Special/Ultimate Moves that can impact Matches through incredible Damage Bursts and annoying Effects such as Faint.

His Extra Move also improved massively, since at release it was very wonky to use, while now it’s almost a foolproof Move considering it locks Blast Cards, it’s possible to follow it with other attacks, and it provides big Damage Buffs too. So, is he perfect? Ehm… yes, just like the other Zenkais on the Team, he basically doesn’t have any weakness, its only shortcoming is that he’s just not as overpowered as SP SSJ2 Gohan RED, but he makes the Team much better. It’s fair to say Saiyan can be considered at the same level as Son Family.

This Team is basically a weaker variant than standard Saiyan, since all its Fighters are Saiyan, but none of them except SP Super Gogeta RED is strong enough to be in the Saiyan Core. Still, Fusion Warrior’s identity as a fearsome Strike-focused Team is back, as the new entry, SP SSJ2 Kefla GRN, and SP SSB Vegito BLU are a trio that can generate endless Combos and finalize them with decisive Ultimate Moves.

In particular, SP SSJ2 Kefla GRN aged quite well, as she’s been in a lot of good Banners recently, so chances are you own her at Red Stars. However, this Team still has clear issues, such as the complete lack of a Purple Fighter - SP Super Vegito PUR sadly isn’t good anymore -, durability issues since only Gogeta should be considered Tanky in the current Meta, and it could also use a better Yellow since SP Vegito YEL isn’t quite as good as he was during Anniversary - His offense isn’t as dominant, and him needing to receive a hit in early game to draw a much needed Extra Move for his toolkit to work well is bothersome -.

In any case, the anniversary of the Dragon Ball Super: Broly movie is near, so maybe Fusion isn’t done for the year.

Finally, Lineage of Evil is getting something new, but sadly 1st Form Frieza shares colors with the best Fighter on the Team, SP FF Cooler BLU, who also became great again thanks to its Zenkai Awakening.

However, this doesn’t mean Frieza can’t be used on Lineage of Evil, as the Team is in such a precarious situation Meta-wise, that any good release is welcomed. EX 1st Form Frieza BLU has fantastic stats, high Blast Damage output, and also Supports the Team well, so if you’re a Lineage of Evil main you have to find a way to make him and FF Cooler work together. Blue Color Counter is the way, with SP 1st Form Frieza PUR being the clear best choice for the Purple slot. The ancient LF Fighter can still provide good Support for the Team overall, but his Offense and Defense are really outdated, so the other two Fighters have to carry in basically every Match, even against Green Fighters at times!

Luckily, thanks to the massive Support on this Team, their Damage output will be consistently be very high, so if played well Lineage of Evil now has a chance at competing against even Top Meta Teams. SP Metal Cooler GRN is still in the mix, even though the current Blue Color Counter architecture doesn’t exactly make him a good fit Type wise. He’s still a good pick in any matchup that doesn’t feature fearsome Purple Fighters, or even against other Blue Color Counter Teams.

This Team has been revitalized by the recent influx of EX Zenkais, as all of them have the Frieza Force Tag. In particular, EX 1st Form Frieza BLU and EX Vegeta YEL are both key components, as they synergize really well toolkit and deck wise. Together, they make a dangerous Blast-focused duo, and SP 1st Form Frieza PUR can push them to even further heights Offensively.

The high stats make them deceptively durable as well, so they’re a solid enough Team to be played in the Meta at this point. Regarding EX Nappa RED , he’s of course a playable option on this Team thanks to his recent strengthening, but his Strike Focused kit makes him a bad fit overall. As for EX Raditz BLU, he’s a great Bench for the Team overall since his Zenkai Ability benefits EX Frieza, and when it’s needed he can join him on the main Core to make a Blue Color Counter, which has a similar concept as Lineage of Evil’s.

In particular, Gogeta and Broly are the Team’s aces, while Metal Cooler just fits on the Team really well  while also being a good Offensive Fighter on his own. The Team still lacks a HP Z-Ability and it could use some more versatility color-wheel wise, but just like for Fusion, the Dragon Ball Super: Broly Anniversary could mean a lot for the Team in the immediate future.

Since EX 1st Form Frieza BLU is a free Fighter, let’s just focus on SP SSJ Gogeta RED. He fits on so many common Teams that if you Zenkai him, you’ll almost certainly have ways to use him.

At the current point in time, he’s for sure a top 5 Fighter on the Game, but there is an issue: Christmas and New Years Events are near, and his Banner lasts 45 days from now. So, if you’re in a really comfortable enough CC wise, you should probably Zenkai Awaken him already, but if you’re still recovering from the recent Step Up, it’s probably better to wait a month before deciding.

Please can I get some help to build a team
Hi! Make sure you correct assign your post to an appropriate sub-category above! Q…
Character concept, Hercule
So, I don’t know if there ever was an April fools styled update, but with April coming…
DBL Guild "Perfection"
(previously on whatsapp, now on discord) DBL PERFECTION Hello everybody! We are …
Dragon Ball legends Android 10 no notifications help?
Hello everyone I’ve just started playing all Dragon Ball legends on Android 10 I’ve…
I’m Back
Hey everyone, I’m back. I was gone for a while because my password went wonky, but I’m…
Read More