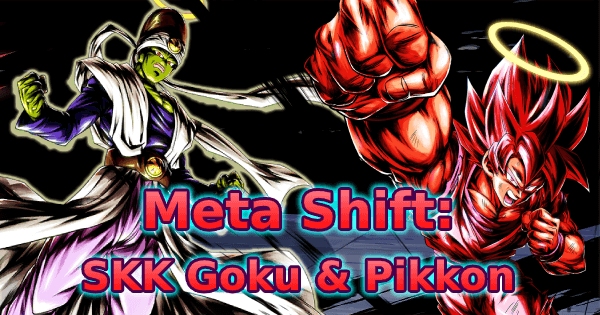 In an unexpected turn of events, the first Banner to be released after the Anniversary the forgettable showdown between Goku and Paikuhan. While the context is pretty uninteresting, the new Fighters are quite unique, mostly because of their orientation to a Color Counter Based Team ( although SP SSJ KK Goku GRN isn’t strictly limited to that ).

In a lot of ways, this Banner is very similar to the Goku vs Hit Legends Rising Banner, but sadly that’s not a very lucky comparison to be blessed with since both the new Fighters featured on that Banner didn’t have a long term impact on the Game, so let’s see if Goku and Paikuhan could be any better.

The premise of this banner is making SP Paikuhan RED and SP SSJ KK Goku GRN work well together. Color Counter Teams were victim of poorly spread Ability Bonus in the past, but now that there are Z-Abilities that Buff multiple Colors, that’s not much of a problem in this case. Specifically, the new Fighters both Buff each other’s Color, so the synergy is good overall.

Both Paikuhan and Goku are Blast Based, so other natural fits on this Team are Fighters like SP SSJ4 Vegeta RED and SP Omega Shenron RED ( who can handle both Strike and Blast Cards ). Offensively, the Team flows pretty well, as every Fighter can deal consistently high Damage. Defensively, this Team has no clear Tank and SP SSJ KK Goku GRN’s Endurance Mechanic is really inconsistent, considering his low Defenses make it hard for him to safely go under 50% Health. This Team’s durability issues become even more apparent when the opponent is SP SSB Vegito BLU ( so the majority of the Games ).

Color Counters are usually really disappointing due to its flawed core idea which forces to bring two Fighters having the same Colors and this Team makes no exception.

SP SSJ KK Goku GRN Buffs Son Family through his Z-Ability, but he has to compete with a very recent Fighter for a spot on Goku Team, namely SP SSJ4 Goku GRN. The former’s advantages are mainly a better Z-Ability, better held cards and slightly more consistent Damage, while the latter has way better Defenses and a kit that probably synergizes better with the rest of the Core.

This is really bad, actually worse than the Hit & Goku Legends Rising Banner, since at least they were quite great at release ( especially Hit ), unlike SP SSJ KK Goku GRN and SP Paikuhan RED.

The Fillers aren’t any better, since excluding SP Android #21 PUR, all of them are severely outdated. This is just a Banner you should skip with no regrets.