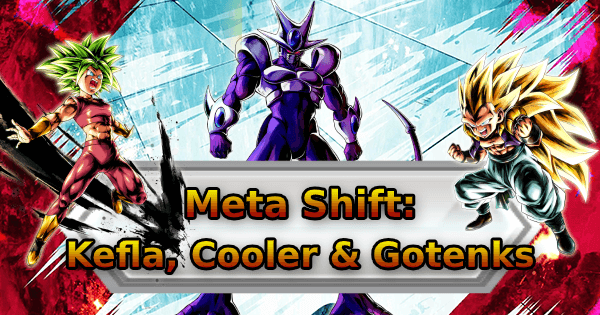 A new Step Up Banner and Zenkai release come with this update and both of those are really relevant for Meta development. The highlight Tags are Fusion, Lineage of Evil, Female Warriors and Hybrids, which received some updates recently but still weren’t good enough to form dominant Meta Teams.

Of course, with Anniversary being so near, it’s hard to correctly define whether a Banner is worth pulling on or not, but considering there is no new LF and this Step Up comes with some great Pull mechanics as always, things become really interesting.

Fusion Warriors’ improvement is obvious, considering both of the new Fighters fit in this Team. The Build now consists of a bunch of Offensive Fighters that take advantage of the Strike-focused Deck to quickly inflict high amounts of Damage to the enemy. This is magnified by the new Fighters’ capabilities to both lower their Cards’ Ki Cost and activate Arts Draw Speed  + 1, the perfect combination to pull off long Combos.

The new Fighter and the recently released SP Vegito YEL probably make the strongest and most consistent lineup, while the fan favorite SP Super Vegito PUR appears to be a more specific pick, for example against Teams that have Regeneration Fighters as Core.

However, something to talk about is also the Team’s survivability. In fact, the new Fighters bring Strike Boosting Z-Abilities that replace some Defensive ones on the Team, which combined with the fact the Build doesn’t have neither a Defensive Pivot nor particularly impactful Healing Abilities, means that overall Fusion won’t really be Tanky, especially by Mid Game as SP Vegito YEL’s Defensive Abilities elapse.

In any case, the Team’s diversity and Offensive versatility make it a serious force in the Meta.

Zenkai 1 SP FF Cooler BLU was truly a terrific Fighter thanks to his Offensive dominance, and it looks like the Developers want to recreate that period of time. In fact, he just needed a stat Buff to be relevant again, but quite a few parts of his toolkit got upgraded as well. His Unique Abilities don’t look much different --although Ki to allies added to his Support is quite great--, which is fine because they were already good, however his Extra Move now allows him to stack a lot of additional  permanent Strike Buffs, and his Main Ability provides him of some much needed Damage Reduction.

Overall, Lineage of Evil is one of the strongest Offensive Teams in the Game and also happens to have some crucial Defensive pivots, who make the Build really balanced.

SP FF Frieza RED also improves thanks to this release, since the Core is now more focused on Strike Cards and there are some quite terrifying Saiyan Builds to counter in the Meta.

While the previous Core was already pretty good, the Team needed some diversity and while SP SSJ2 Kefla GRN doesn’t complete the color wheel, she makes the Team better considering how many good Blue Fighters there are in the Meta. Her and SP Majin #21 PUR make an explosive combination considering they both can pull off long Combos, thus in good hands this Team can take advantage of some Game mechanics to stall very well and become basically untouchable for long stretches.

However, it’s worth noting that her possible Team Builds aren’t particularly durable and the lack of a Yellow option is quite glaring, thus Female Warriors

However, this Tag basically only has three good Fighters and they don’t even make a good color wheel together, so they’re really easy to counter by some more diverse Teams.

The new Step Up Banner shakes the meta quite a bit, with Fusion Warriors and Female Warriors both significantly improving. Normally pulling on this Banner would be a no brainer, although the fillers aren’t the best, but with Anniversary being so near it’s important to be cautious. Generally , if you don’t strictly main one of the upgraded Teams, you can avoid going hard on this Banner. Otherwise, try your luck with the beneficial mechanics this Banner has.