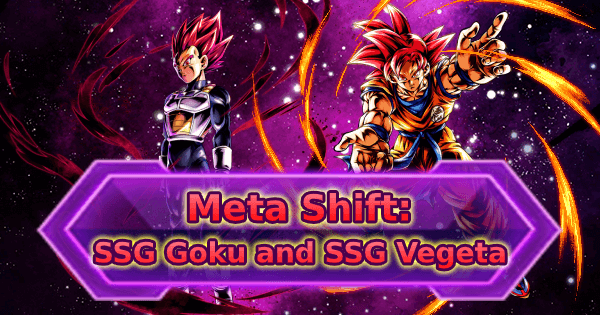 The new update brought in arguably the worst Banner mechanic up to date: Legends Rising with no Z-Souls bonuses whatsoever, thus just offering flat multi-pulls and daily discounts. While this kind of Banners were sort of accepted in the past thanks to the high value Fighters they featured, the last two have been quite subpar.

This new one focuses on God Ki, a highly popular and competitive Tag, which is quite hard to improve upon since it already has a few staples. Let’s see if the new Banner manages to do it.

SP SSG Goku PUR and SP SSJ Vegeta BLU cover Colors that were already really competitive on this Tag, thanks to SP SSB Vegeta PUR and SP SSB Goku BLU being featured in many past Banners, meaning many Players have him at high Star Level. Although that’s a pretty relevant advantage for the latter, toolkits play a big part in evaluating specific Fighters.

Looking at SP SSG Goku PUR, he’s a Fighter that can be used in virtually any Matchup and offer great Defense with a good and consistent counter-Offense mechanic. While SP SSB Vegeta PUR is still very good --Especially in the God Ki mirror Match where he counters the shinier version of himself, namely SP SSB Vegeta GRN --, the newly released Purple Fighter brings something unique to the Team and he’s arguably better since it makes the Team even tankier. The takeaway here is that unless SP SSB Vegeta PUR has many more stars than SP SSG Goku PUR, the latter edges him out.

On the other hand, SP SSJ Vegeta BLU is flat out worse than SP SSB Goku BLU even at equal star level, we’ll see in the next paragraph why.

The main problem with SP SSJ Vegeta BLU is that his Damage output relies too heavily on his Stackable Buffs, which are also quite hard to obtain in a normal setup. Sadly, it gets even worse.

Even in the scenario SP SSJ Vegeta BLU manages to draw a lot of Cards -- like by using his Main or by getting his Arts Draw  Speed Boost multiple times -- the long combos nerfing mechanic implemented in Battle Version 2.1 severely handicaps him. Basically as he Side-steps/Charge-steps in order to get the new cards, the Combo’s Damage gets Nerfed too due to the new mechanic, and by the end of his barrage the Nerf actually surpasses the Buffs impact-wise. This makes him a very flawed Fighter that shouldn’t see use in Top Teams setups, SP Vegeta BLU is just better.

From now on Gamepress will add Zenkai lv 1 Fighters to the SP Tier List since that stage of evolution is accessible to everybody.

This Banner just isn’t worth it. SP SSG Goku PUR is good, but if you have SP SSB Vegeta PUR you can save your CC for a better release. The Fillers are not bad but not that good either, considering SP SSB Goku YEL is decent in God Ki but not needed by any means, and SP Gogeta BLU is falling off.