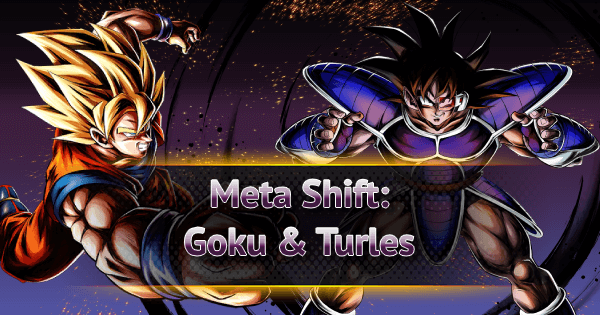 This new Dragon Ball Legends update brought to us a new Legends Rising Banner, the third in a row. While these banners focused on different types of Fighters ( for the most part ), they all have something in common: the questionable Filler Fighters choices, which definitely hurt their value overall, but we’ll get to this more specifically later.

This Banner is mainly meant to add two Fighters that can work as a new starting point for Sagas Warriors, something that becomes apparent when looking at Turles’ Color, which makes him a replacement for SP SSJ Youth Gohan YEL ( the former best Fighter on Sagas Warriors ).

However, that’s not all the Banner has to offer, so let’s see what the new Fighters can do in general.

While Sagas Warriors is what this Banner is about, Goku Team gets the most impactful change thanks to the new SP SSJ Goku GRN having an excellent Z-Ability for Saiyan. This is the third Green Goku released in the last two months, so he has competition, but he ultimately is the best of the bunch since he’s primarily Strike Based, which makes him a better fit compared to the other two.

Now Goku Team has a deck full of Strike Cards whatever the Build used, which makes some Fighter’s Damage ( SP Kid Goku YEL is the biggest example ) more consistent than before.

However, make no mistake, the new Goku isn’t only good because of his intangibles, he’s also a very good Green Fighter that can inflict great Strike Damage at any time, and his Special Move is practically dynamite. He’s not amazing by any means, in fact  he can’t carry the Team by himself, but rather he’s great in spurts and that’s enough for a Team that already has a very solid structure like Goku Team.

Both the new Fighters are Core on Sagas Warriors, however that doesn’t necessarily make the Team good. In fact, neither Goku nor Turles can carry the Team, but they would benefit a lot from another strong Sagas Warriors release. Specifically, SP Turles YEL has the most promising toolkit, as he’s a fantastic Support in the first part of the Fight and becomes a very good Offensive Fighter after using his Ultimate Move.

As of right now, both of them function well alongside SP FP Boujack PUR/SP Cooler PUR and SP Vegeta BLU/SP Broly:Cheelai BLU ( even though SP Turles YEL prefers Blast Damage based allies ), but it can’t be said that Sagas Warriors is a top Meta Team, as it still lacks the Ability Bonus and the Fighters’ quality Teams like Future has. Overall, the Team is decent Offensively, but it’s really fragile, so it’s hard to play it at high ranks at the moment.

Saiyan didn’t get better, as SP FP SSJ4 Goku GRN synergizes with HE Shallot LGT better than the new Goku does, but SP Turles YEL offers interesting and fun possibilities for this Tag. Of course, in any optimal Build SP Youth Goku YEL should never get replaced by him, but Turles works really well in a Blast based Saiyan Team.

This kind of Build ( SP Turles YEL, SP FP SSJ4 Goku GRN, HE Shallot LGT, SP Saiyan Saga Goku BLU)  is quite fragile but its Offense is spectacular right off the bat, mainly thanks to the fitting Deck and the amazing Supportive Effects. In a Meta where many Teams are built around the idea of preferring Offense over Defense, this Saiyan Team works unexpectedly well, as it can produce deadly Combos at any point of the Match. It’s not better than the SP Youth Goku YEL Build, but it’s a very good composition to see the true potential of SP Turles YEL.

Now that we’ve seen what the new Fighters are capable of, let’s analyze the fillers. Looking at the featured Fighters as a whole, they’re not as terrible as the last few Banners’, however basically almost every good filler here ( the best ones are SP Teen Trunks PUR and SP SSJ Youth Gohan YEL ) has been replaced on his respective Teams.

Other than that good Bench Fighters are featured, so it’s not the end of the world, but having a very good third Fighter on this Banner would’ve been ideal.

In any case, the new Fighters are good but not strictly required, especially if you don’t play a Goku Team, you should certainly skip if that’s the case.