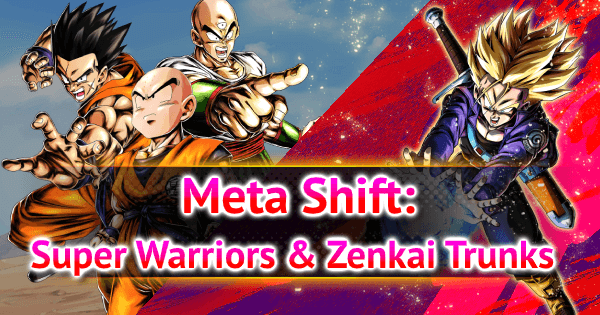 We’re approaching the end of this 2nd Anniversary ( although some might argue it didn’t start at all ) and Bandai just released a bunch of new Fighters with this new update, namely the F2P ones that got teased a week ago. Like many have guessed, some new Super Warriors are finally here! However, just like it happened for the EX Ginyu Force Fighters, they’re not fully F2P, rather we can only collect their initial Star levels from the new Event.

This is also the day of the notorious Zenkai overhaul. In fact, Zenkai 7 SP SSJ Teen Trunks RED is the first experiment for this new formula.

All in all, there is a lot of analysis to be done, so let’s get into it.

While Zenkai 7 SP SSJ Teen Trunks RED isn’t that impressive compared to some of the best Zenkai Fighters, he works pretty well. His Tankiness is something the Team was missing, in fact both thanks to his massive Stats and Damage Reduction, he can pretty much Tank against neutral Damage like he has Type Advantage. Of course, being Red isn’t ideal in the current Meta since SP SSB Vegito BLU is really dangerous, however he still manages to be a very good main Tank thanks to his overall performance.

Offensively it’s another story, as he starts quite slowly and he’d need to face Lineage of Evil or Frieza Force opponents to reach full potential, two Tags that are severely lacking at the moment. However, he’s still pretty decent in that regard, as he can get the equivalent of 50% (70% if he Covers ) Damage Buffs and Arts Draw Speed +1 pretty consistently by the time he switches in the third time, plus some helpful Supportive Effects that apply to the whole Team.

Overall, he’s a pretty good options for a Team that was surely lacking diversity. However, a new Green Fighter is still needed.

The same things stated for Hybrid Saiyan apply for this Team too. He needs to be paired with a Hybrid Saiyan to reach full potential, but that’s not a problem since there are three other Trunks variants on this Team.

The main problem is that this Team had a much better structure than Hybrids’, so even if it lacked a great Red option, it definitely didn’t need it as it’s not even a favorable color in this Meta. For this reason, despite being pretty good , you might not feel the need to replace any of the Core Fighters with this new Trunks most of the time, so it’s fine to use his spot for somebody with a great Z-Ability instead.

The same argument as Vegeta Family’s applies here, but multiplied by 2. In fact, this Team only has one other Hybrid Saiyan and the other four fighters are so good that Trunks just doesn’t fit well, also considering his Z-Ability is really bad compared to SP SSR Goku Black RED for example.

Finally the hot topic, are they comparable to what Ginyu Force was last year? Let’s start with some bad news, EX Chiaotzu PUR and EX Krillin PUR have the same typing, so even if the former got a new broken Equip, he’s never going to see a place here as the latter; he’s truly staying at Roshi’s after all.

In any case , each of the new Fighter has a defined role: Krillin is a Support, Tien has some Defensive Abilities and becomes pretty good Offensively when his allies fall, Yamcha’s Offense is fantastic when every Fighter is alive, so on paper they have good synergy together, but is that enough to make a great Team?

In the current Meta, most Fighters can cover different roles and aren’t strictly restricted to being able to do only one thing well. For this reason,  this Team needs to keep three Fighters alive for as long as possible or it can really fall apart ( especially if EX Tiens GRN is the one to die first ).

All in all this Teams looks fun, but early impressions aren’t great Meta wise.