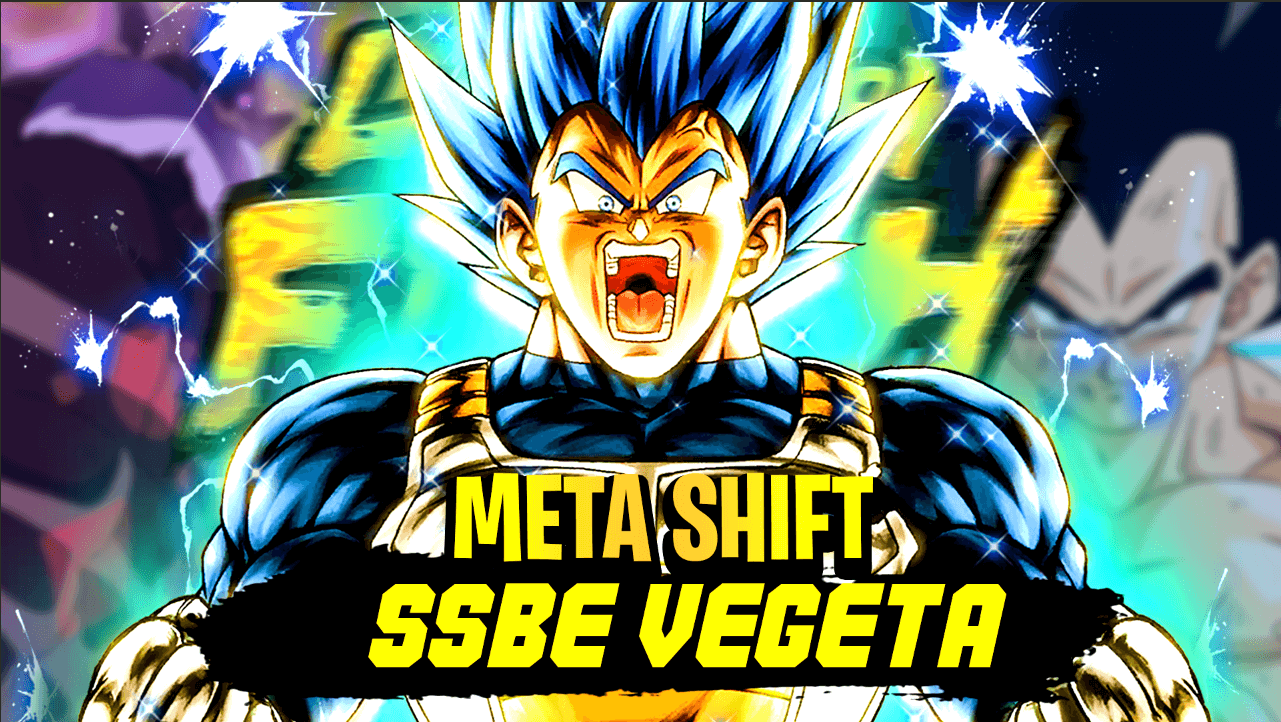 Vegeta's fiercest competitor in the Game is, without a single doubt, SP SSB Gogeta YEL, as he's been a staple for the God Ki Team for a long time now. The thing that made the latter so good in the past few months for the team is his Extra Move, which is a counter that locks the opponent in for enough time to land a Combo, and buffs his Damage to high enough levels to onecombo most victims, especially if the move is paired with Gogeta's Ultimate Move. Vegeta doesn't have anything of that kind, as he's not the type of Fighter who can suddenly turn the tides of a Match through a specific Attack, however he can boast very consistent Damage as a baseline, and a very interesting ceiling that arguably makes him surpass Gogeta on most God Ki Builds.

First of all, what's the type of Team Vegeta prefers to have around him? Since he's a Fighter whose Buffs increase as he chains Cards at low Ki, he'd like to have as many Blast Cards in the deck as possible ( he should be fine by having two Blast Cards in the hand at the start of a Combo, so a mixed Deck works with him too ). Secondarily, due to how his Buff stacks work, he doesn't exactly like Supports that give him Ki like Vados, but this doesn't mean he can't be used with her, rather that Beerus is a viable option again. In general, if you use Revive Goku, it's still preferable to have Vados on the Team as their synergy together is too valuable to disrupt, but in any other case Beerus is a strong option.

While Vegeta suffers a bit from the lack of Arts Draw Speed, his Offensive potential is consistently high nonetheless, especially if he's able to use his resourceful Extra Move during a Combo, or if he can land cards shortly after he finished his last Combo. His Special Move is also extremely powerful as it nullifies the opponent's Element Advantage, making it a very oppressive tool that basically can't be Tanked without losing a lot of HP in the process. Last but not least, his Ultimate Move is pretty standard for a LF, although that still means it's incredibly strong.

Another thing that should be noted is the Effect that he generates by activating an opponent's Revive Effect, Element Advantage nullification for 30 counts and the destruction of 2 of the opponent's Dragon Balls results in a great upside for Vegeta's Team, and unlike SSJ4 Gogeta's, this "Anti-Revive" Effect is Meta-relevant as it allows Vegeta to seriously hinder any Revive Gohan - led Team.

Vegeta is an upgrade for the God Ki Team at the same star level as SSB Gogeta, and a valuable Fighter to use against current Meta Teams.

Vegeta and Jiren are both upgrades for the Universe Survival Team, which is finally starting to look pretty strong. They respectively replace Android 17 and 18, but it must be noted that for one of them it's a clear-cut thing, while for the other it's arguable. 18->Jiren is a clear upgrade regardless of the perspective, Jiren is just superior at basically everything at equal stars. As an EX, the Universe 11's hero has access to optimal Equip choices, and his kit is overall just fantastic. He boasts great Damage potential, which surges to even more incredible levels against popular tags such as God Ki and Son Family, decent Damage Reduction which results in consistent Tankiness capabilities if coupled with his Element Disadvantage nullification on cover ( up to 4 times )), valuable Supportive Capabilities, and Blast Armor on both Strike Cards and Special Move. In comparison, 18 just can't match his level of oppressiveness or raw Damage.

17, on the other hand, is a great Fighter that previously was the best Fighter on the Team. His toolkit is very complete, ranging from nifty utility Effects, to unexpectedly high Offensive potential thanks to his Lock-in Mechanics. Thanks to the common star Advantage 1% Fighters have over LFs, it's likely that 17 will be able to Tank better than Vegeta on Most Teams, and since this isn't a super durable Team, that's something to keep in mind. Still, Vegeta's Offensive capabilities are just better, he can be a reliable ace for the Team. Unless your 17's stars are much higher than your Vegeta's, the prince of Saiyan's Damage ceiling makes him a superior option for a Team that lacked an oppressive Fighter such as him.

Still, the Team is not complete yet, as things currently stand ranks in high Tier 1 at most, as it's just a mix of good/great Fighters that synergize well together, and it lacks the game-changing tools such as Endurance, Revive, or other unique things that make top tier Teams so strong.

SSBE Vegeta is a fantastic fit for Vegeta Family. The Team needed a Yellow option, as SP Vegeta YEL didn't fit the Build very well ( His defensive utility and Support looks much better in a patient Team such as Saiyan, than a recklessly Offensive Team such as Vegeta Family ). Also, the Team is heavily Blast based, so it's a match made in heaven. While SSBE Vegeta's Offense isn't the answer to all of the Team's issues ( the Defensive weaknesses are still glaring, and it has lackluster Green options ), it's just so fun to run this Team and mindlessly spam incredibly powerful Blast Cards. SP SSJ4 Vegeta RED and SP SSJ2 Trunks BLU are both Fighters that can make a top tier Offensive duo with SSBE Vegeta, and SP SSB Vegeta PUR's Supportive Capabilities remains among the best in the game to this day ( but he needs high red stars to deal good Damage  ).

End matches fast thanks to incredible Offensive potential, or succumb to the opponents by mid-late Game, this has always been Vegeta Family's motto, and the current variant of the Team makes no exception.

Toppo vs Jiren is a close argument, despite the latter being so much stronger in the DBS anime. They're actually pretty similar, as both their Offensive and Supportive capabilities partially rely on them getting hit first ( although this works better than Toppo since he's a Tankier Fighter ). At a glance, it might seem Jiren has a decisive Offensive edge, especially against God Ki or Son Family opponents, but Toppo's Main Ability reducing his allies' sub counts and providing him of an Ultimate Move that locks in makes him even better than his competitor in spurts. Toppo's Main even heals his allies, so he's just a more complete option for a Team that needs a bit of everything like Rival Universe.