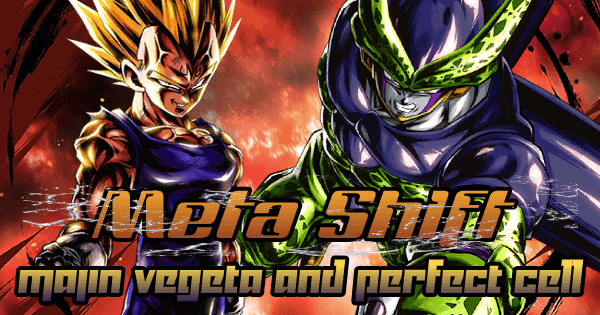 However, this is certainly nothing to complain about, since not only the new Fighters look very exciting, but also they strengthen Tags that were in need for help, so let’s see how the Meta Shifts after this new update.

SP Vegeta (Majin) BLU is a perfect addition for the Saiyan Team, both because he’s a fantastic Fighter and because the Team needed a Blue that could fit well alongside SP Kid Goku YEL.

The Prince of Saiyans is a Melee Fighter that inflicts great Strike Damage before Transforming, and enormous overall Damage after that. The highlight is definitely his Special Move, that can even one-shot opponents after he activates his Main Ability, but in general Vegeta has a toolkit that makes it extremely easy for him to be a very Effective Offensive Fighter.

Prior to his release, SP Kid Goku YEL was suffering against Red opponents, as there wasn’t a good enough Blue ally to cover him, but of course that isn’t an issue anymore now, so Saiyan definitely became considerably better.

EX SSJ2 Goku PUR was also released in the most recent Banner, but other than his Z-Ability he doesn’t bring anything noteworthy to the Team ( even if his Damage is high potentially, his toolkit is too basic ).

Vegeta Family wasn’t in dire need of a new Blue Fighter like Saiyan was, but the new Vegeta is strong enough that he improves the Team nonetheless.

This Team was previously using a Future Health Boost ( SP Mai GRN’s ), and with the arrival of SP Vegeta (Majin) BLU that becomes less convenient, but fear not, because while Vegeta Family loses something durability wise, it can now boast Fusion Warriors levels of Damage output.

SP SSB Vegeta PUR is still the leader of the Team, as his Support is the basis for all possible lineups this Team can put on the field. In that sense, it’s ideal that Vegeta Family  has a perfect color wheel, as they can virtually counter most Builds thanks to constant Color Advantage and very high Damage output.

This Team was already top tier, and the new release only solidifies that placement.

Regeneration is on fire. After receiving a massive boost thanks to Zenkai 7 SP Demon King Piccolo YEL, SP Perfect Cell (Revived) RED completes this Tag’s puzzle by being a very strong Offensive Fighter with an uncounterable Defensive Mechanic that makes this Team more annoying than ever to face.

Theoretically, SP Omega Shenron RED might look like the more fitting option thanks to his better held Cards, Z-Ability and more immediate Offensive contribution, but all that gets trumped by the fact that Cell-DKP-Good Buu make an insufferable lineup that can nullify most attacks in early-mid Game, while easily gathering Dragon Balls for an early Rising Rush.

As things are now, Regeneration to what it was pre-Anniversary, namely a very durable Team with impressive Offense, but the lack of a truly impactful Blue Fighter might hurt it in the long run.

Similarly to what happens on Regeneration, SP Perfect Cell (Revived) RED improves this Team both Defensively and Offensively.

Android is still a few releases away from being a complete Team, but at least now it can boast a terrifying main trio: Cell-Z7 #16-Evil #21, whose durability is only surpassed by Regeneration in the current Meta.

All in all, Android is probably going to reach top tier status once it gets some more Fighters, but even now it’s finally a viable Team you can have a lot of fun with.

This Step Up is a must pull in many ways. Primarily, the new Fighters are both incredibly strong, as explained in the previous paragraphs.

Secondarily, the Fillers lineup for this Banner is unbelievably good, featuring amazing Fighters such as SP SSJ2 Kefla GRN and SP Evil #21 PUR, as well as LF Fighters that are receiving massive Boosts thanks to Zenkai Awakening, and other Fighters that still fit Meta Teams well.

Is the EX Tier List going to receive an update?
Just wondering how some of the new EX characters influence the game or if they’re…
Why isn’t Vegito an Otherworld Warrior?
I came to this thought some time ago and forgot about it. But now, I just can’t get…
Help me with teams?
I have been away from the game for a while and I was wondering what teams would I be…
The Zenkai Meta is Here!- Dynamic Duo's
ENDING OF AN ERA The Vegito Blue Meta which we had to suffer through has finally come…
Trunks youth
New to game, When will the trunks youth event come back? 1 post - 1…
Read More