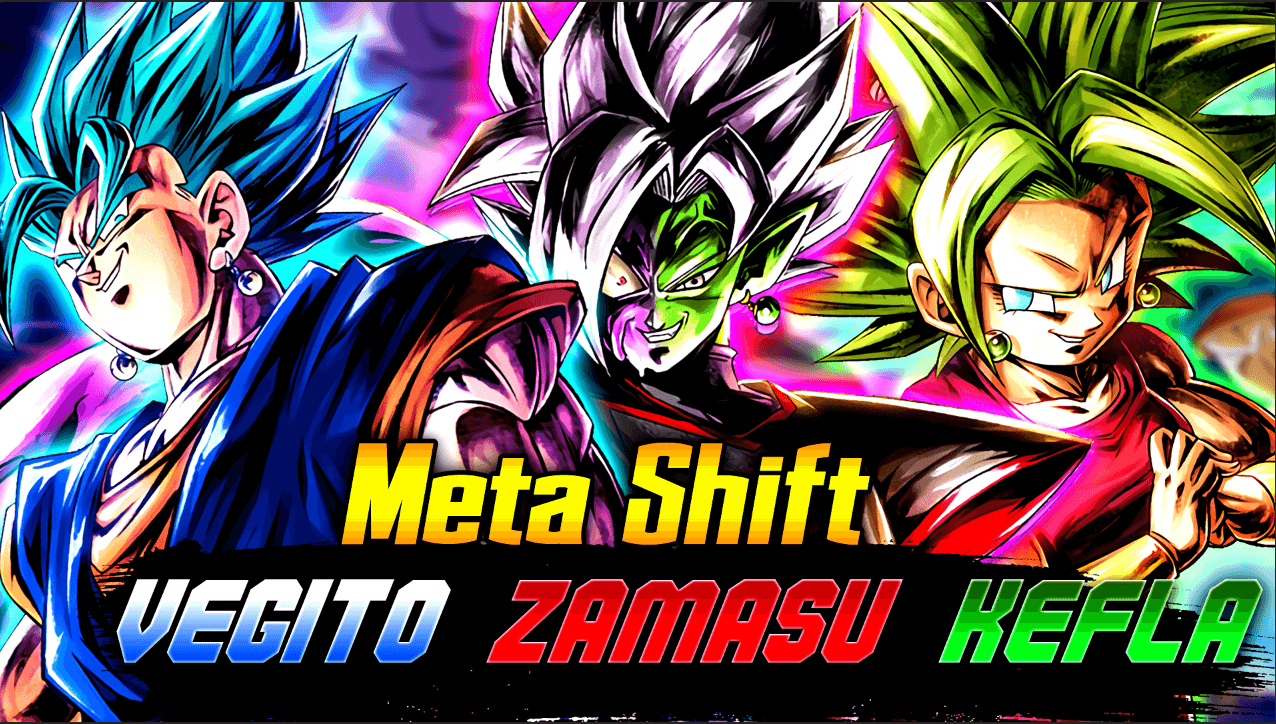 For the second year in a row, Dragon Ball Legends' Anniversary focused ( at least partially ) on characters from the Goku Black Arc. This outcome wasn't obvious at all, as Future has been in the spotlight quite consistently for the past year in terms of new releases, and also because the expectation was to receive something more... original than what's effectively a part 2 of the 2nd Anniversary in terms of new Fighters.

Despite that, saying this Banner is specifically meant to make Future stronger would be a mistake, primarily because Vegito Blue and Zamasu fit in many Meta relevant Teams, and secondarily because a new SSJ2 Kefla is also featured.

In fact, even before the toolkits analysis, it's easy to say that compared to the other banner, this one is surely more versatile in terms of value. Without further ado, let's get right into it.

Zamasu is one of the two new Legendary Finishers of this Anniversary, and as such he has a very interesting toolkit that includes some very clear flaws, but also incredible Abilities that make his gameplay ceiling incredibly high. Primarily, he's a fantastic Damage dealer whose Buffs reach their peak ( 140% ) rather quickly. He also has stackable Anti-Saiyan Damage Buffs tied to his Strike and Blast Cards, which further magnify his already impressive Damage against one of the most common Tags in the Game.

However, his most interesting trait is definitely his Extra Move, which is a standard AoE, mid-range combo starter which locks the opponent in and disables type disadvantage for 3 seconds ( enough to chain 1 card or a Rush considering also the delay caused by the animation ). His Extra Move is so interesting because he can draw one after hitting a Special Move, twice per match, so he's capable of putting incredible pressure in idles situations. While it's true that this capability of is can become quite predictable, it still limits opponents' play style choices greatly, and even in the worst-case scenario, providing Extra Moves for his allies is still a pretty useful Ability.

Other than that, Zamasu is just a really annoying Fighter to face: if you switch against him, he refills his Vanish Gauge ( 8 times per Match, basically for its entirety ), if he defeats a Fighter he also deletes the opponents' cards ( which very annoying after a Rising Rush, since typically that's a situation where the "victim" can start a comeback by taking advantage of his full hand as opposed to the other user's lack of cards ), his Ultimate Move locks in after it connects and even reduces the opponent's Ki by 100. He's just an all-around strong Offensive Fighter that massively disruptive capabilities.

Regarding his weaknesses, it's obviously everything related to his lack of Defense. In fact, Zamasu is a Fighter who is very easy to take down if put in a combo, as he'll die after just suffering a few blows against any strong Offensive Fighter. His great Healing Capabilities ( he Heals by 5% for every Strike/Blast Card used if his Health is below 70% ) somewhat make this problem slightly less noticeable,  but he needs to be very high stars to truly feel like it makes a substantial difference ( at least 7 ).

At least, his Death Buffs make his susceptibility to get one-shot/one-comboed a bit more acceptable, but it's still a big issue and it's not rare for him to get dealt with before he can have any type of impact on a Match

Future, God Ki, and Regeneration are all Teams that benefit from Zamasu's addition, but it's not as clear-cut as: get a great DPS = become better. In fact, Zamasu's Defensive woes must be handled intelligently through Team Building in order to make him feel as safe as possible. Regeneration, and to an extent God Ki, do it best as they can provide Zamasu of constant healing, and they can shield him with allies that have either great  Switch-in Defensive Effects, very high Defenses, or both ( looking at you Fat Buu ). Those two are also Teams that feature other Fighters with incredibly disruptive Effects, so adding Zamasu to that mix result in incredible Offensive Potential.

For Future the situation is more complex, as the Team fundamentally lacks a Defensive Pivot on average, the only real Tank on the Team would be high star SP SSJ Gohan YEL, but since he's a LF that's no easy task. The Team, with or without Zamasu is a reckless mix of super Offensive Fighters, so he doesn't really change the dynamic of the Team, and as a result, he doesn't improve it significantly. Roughly the same argument applies to how he fits on Powerful Opponent.

How does he compare to other Red option on all the Teams? The only real competition is SP Perfect Cell RED, and frankly put, he can be more useful than a 7-8* Cell even at low stars, especially on a Team like Regeneration, where his early Game oppressiveness is more dangerous than the slow, patient approach Cell forces his Teams to take. Against a 14* Cell, he probably needs 6* to compare.

For the third year in a row, the Potara Fusion of Goku and Vegeta makes an appearance for the Dragon Ball Legends Anniversary, but this time he's not the highlight of the celebration, as he's not a LF unlike in year 1 and 2. Having said that, Vegito Blue is a special Fighter nonetheless, as his toolkit is filled with interesting Abilities that make him incredibly versatile.

First things first, his Damage. Truth be told, unless he's very high stars, his Damage is nothing special in general, as his Offensive Buffs only become good after 25 Timer Counts, and even then they're not high enough to make him particularly noteworthy in that regard, as his Offensive Stats are very low. Still, on every switch-in, he gets a very noticeable Buff for the first Blast Card he uses, which makes his total Damage output consistently decent at the very least.

That said, Vegito manages to be a great Fighter nonetheless thanks to his multitude of resourceful Effects, both Offensively and Defensively. In fact, he can stack up his Special Damage through his Strike/Blast Cards, he draws a card if he has 3 or less on switch-in ( which makes him great at stretching Combos in general ), he can destroy 1 of the opponent's Dragon Balls and lock him in with his Extra Move ( specifically, it can be used strategically by missing the Extra Move on purpose and then use Rush immediately to kill the locked in opponent ), he regains Vanish on Ultimate Move. Last but not least, he even Supports (although the Buffs are not that good) and Tanks relatively well.

Jack of all trades, master of none? That could be a fitting remark, Vegito brings many things to the table, but he's not excellent at anything, and that's completely fine.

It's crystal clear that he's the main Purple on Fusion, as he finally replaces the two years old SP Super Vegito PUR. The only doubtful thing for him on the Team is his fit, as he's a Blast Fighter on a Team that naturally prefers to have as many Strike Cards as possible to magnify all of its Strike Damage dealers' output. Still, it's not the end of the world, he should be on the Team nonetheless as having a Purple that can somewhat counter the likes of SP SSJ3 Goku GRN is vital and the current Meta, and also his versatility makes the Team even more unpredictable.

On God Ki, he fits well alongside Vados as she greatly amplifies his Damage output, although the competition here is a bit more troublesome than on Fusion. In fact, a 6* Ultra Instinct Goku makes it a very close argument, with it basically coming down to playstyle preference. The clear thing Vegito has over UI is the durability. As a result Him, Vados and SSB Goku make a great trio that does really well both Offensively and Defensively.

On Future, he definitely replaces SP SSB Vegeta PUR as the latter couldn't be a valid Purple option at this point at the Meta. He basically functioned as a great Support who, on the other hand, couldn't provide meaningful Offensive/Defensive contribution on his own anymore. While Vegito can't match Vegeta as a Support, all the other things he does better make him more than worthy as the new Purple for the Team.

Just like the first Kefla we got, the new one is also incredibly Offense-focused, to the point her kit doesn't have much else other than Damage Buffs. As a result, Kefla is a Fighter that can deal quite impressive Damage right off the bat, but she can get hurt in return just as easily.

However, it's not like Kefla is barebones, a she has a Vanish Gauge-related Ability that makes her rather interesting and hard to use. Up to two times after every switch-in, she can recover 60% of her Gauge after the opponent vanishes. Realistically, this can be used in two ways for the most part:

Overall, Kefla's Vanish mechanic can potentially be quite helpful and turn her into a Fighter who is very hard to catch, but at the same time it can also be completely influential.

Sadly, there is no place for Kefla on Fusion Warrior, as SP Super Gogeta RED Z7 is just way better than her at everything. On Rival Universe, things become more interesting because she's roughly as useful as Bergamo if both have the same star level, although that's not common as you're more than likely to have the leader of the Trio De Danger at Red Stars if you played at least since his release. At a similar Limit Break level, they're close and Kefla's Offensive edge right off the bat probably makes her a preferable option for those who have a very aggressive playstyle, while Bergamo fits passive players' style much better as he can Tank much better than the Saiyan, while also having quite the Offensive ceiling and a barrier Extra Move which always comes in handy.

This Banner covers a wide array of Teams in terms of new Fighters, as God Ki, Fusion, Future, Regeneration, and Female Warriors can all decisively benefit from these additions. Among the other featured Fighters, it's not worth talking about the general Sparking filler pool as they all have low rates singularly, but it's worth to address the LF filler pool: SP SSB Gogeta YEL and SP SSB Vegito BLU are still really good options for their Teams at high stars ( at least 6*), and SP Super Vegito PUR-SP 1st Form Frieza PUR are both Fighters who might Zenkai soon.