I need help making a team!
@Yukisuga wrote: Hi, this is my first time here. I haven’t…
Save or spend 6k crystals on current banners?
@Pwnmonster wrote: I was rolling on the step-up banner,…
Best team’s to play from what I’ve got? Newcomer
@GeeDawggg wrote: Hi guys, just recently downloaded the…
Is this team good for PVP or should I change something?
@ereyes_11 wrote: image1125×2436 971 KB …
Can you help me build a team?
@frozzy wrote: image750×1334 611 KB …
Read More
GamePress 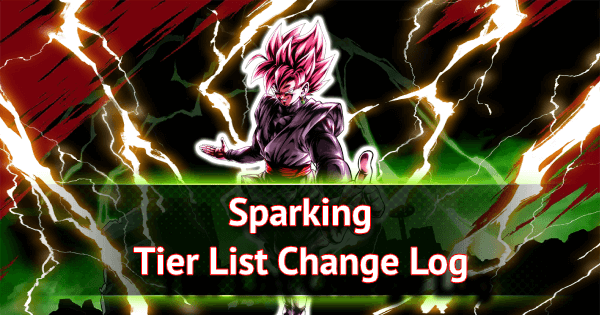 A Sparking Tier List change log gives a bit of insight into the thought process of why some Fighters move up or down, but will also give an evaluation of Fighters to keep an eye on for future updates.

The Situation of Legendary Finishers

Legendary Finish Fighters have been a matter of discussion after the last update, since the new Star System seemingly nerf them compared to the rest of the Sparkings because they’re harder to pull in general. However, they see no change on the Tier List for multiple reasons. The first is that the Meta still has to settle, LF Fighters are still very Effective since only few of the most recent Fighters are consistently at a high Star Level in PVP ( SP SSB Goku BLU to name one ). Similarly, it’d be too hard to exactly identify each Fighter’s average Star Level in PVP, something that would permit to accurately analyze how big of a hit LF Fighters take following the Update. For these reasons all of them stay where they were pre update.

He alongside with SP SSJ4 Vegeta RED introduce seemingly a new level of power creep, with their Damage inflicted Buffs on entry making almost everyone else's pale in comparison. Durability shouldn't be too much of an issue for him either as he reduces Damage received every time he comes in and restores 10% of his Health.

Get used to seeing him in Z Tier, it's unlikely to change any time remotely soon.

He's an unrelenting Ranged Fighter, receiving 40% Damage inflicted and 40% Blast Damage when popping into the battlefield, as well as restoring 30 Ki. Those traits paired with his permanent increased Card Draw speed and reduced Blast Arts cost make him one of the best Ranged Fighters this game has seen to date, relative to their release.

He could've been Z Tier had he done a bit more Damage and if it wasn't so situational, but he's still an amazing Support and the primary Blue for two tags that just got a huge resurgence: GT and Regeneration.

Almost everything in his toolkit sticks out. Every time he's switched out, he provides a Team-wide Heal and gives his allies Damage inflicted. He has an extra 40% Damage to some of the more popular Tags in the game. His Main Ability gives him a permanent Damage received Buff, makes his allies do a whopping extra 40% Damage, and increases their Health Restoration which synergizes very well with his aforementioned switch-out Heal.

The Android Tag has stagnated, but he's now the primary Green Fighter for arguably the best Tag in the game in GT due to the addition of the Super Saiyan 4 Fighters and SP Super Baby 2 BLU.

He synergizes exceptionally well with SP Super Baby 2 BLU due to the Health Restoration and Damage inflicted Buffs he gives him, so he's moved back up to S Tier.

His toolkit still has the same aspect of clunkiness to it, and his Damage primary relies on burst with his Main Ability, but SP Super Baby 2 BLU makes him very difficult to play against.

Tier 4 is reserved for Z-Ability/bench Fighters, and with the resurgence of Regeneration he does have a spot on their bench.

He was always borderline when it came to Z Tier. The primary reason he was in Z Tier was due to his Enemy Team-wide Debuff which essentially caused them to take 30% more Damage from his God Ki and Future Teammates. It was stated in the previous changelog that any popular Fighters that can effectively deal with these Debuffs could push him out.

Now that SP Super Baby 2 BLU is not affected by these Debuffs, and SP SSJ4 Vegeta RED can clear them with his Extra Move, he's a bit less effective as before. Depending on releases for Future and God Ki, he'll always be hovering around the area at the very least.

SP Bardock YEL was a bit overvalued in the last Tier list update, and did not have that much of an effect on the Meta at all. He's still OK in the Saiyan Team, but it's preferable to bring basically every other core member over him.

His situation is similar to SP Bardock YEL. He was a bit overvalued in the last Tier list update. It's increasingly difficult to break up the primary Sagas From the Movies trio of SP Boujack PUR, SP Vegeta BLU, and SP SSJ Youth Gohan YEL

SP SSJ4 Goku PUR completely kicks him out of the core in Son Family, and Hybrid Saiyans are still a big work in progress.

After his Legends Road, he's gotten basically nothing in terms of support Team wise, so he's gone down to Tier 2 for the time being.

It's a shame what's happening to such an iconic Fighter and character, but it needs to be done.

He's been replaced in Sagas From the Movies Teams multiple times over, been power crept, has had his Blast Armor capability made less effective, and his Unique Abilities are not even in the same stratosphere of what newer Fighters have.

He should only be used if the Player is missing multiple core Fighters, which fits the Tier 3 description.

SP SSJ4 Vegeta RED kicks him out of the core, and even after his Balance Change he was never really that great anyway.

SP Super Baby 2 BLU is the superior core Fighter, it's arguable whether he's even better than EX Evil Buu BLU  at this point, and he's been power crept to death. He should only be used if the Player is missing multiple core options.

He was never that great, never saw consistent play, and has no Team or place in the Meta whatsoever.

There are superior core and even bench options at this point. He simply has no place anywhere and was never that good even after a Balance Change.

He was actually pretty good after his Balance Change some time ago, but he's been power crept again and his Z-Ability is tied to a Purple Color Counter Team, which is currently not a viable Team.

Despite moving up, he still has the same problems as before. SP Super Baby 2 BLU is keeping him afloat, for now.

He's not that bad of a Fighter, but Hybrid Saiyans just need a few releases is all.

He moved up because of the 14 star update, as soon as power creep starts setting in again he'll see himself drop down to Tier 1.

Raditz
18-0 in both LBRs, top 1k in PVP ever since they started giving CC out for it, immune to anecdotal evidence, 250 pound bench press for reps

I need help making a team!
@Yukisuga wrote: Hi, this is my first time here. I haven’t…
Save or spend 6k crystals on current banners?
@Pwnmonster wrote: I was rolling on the step-up banner,…
Best team’s to play from what I’ve got? Newcomer
@GeeDawggg wrote: Hi guys, just recently downloaded the…
Is this team good for PVP or should I change something?
@ereyes_11 wrote: image1125×2436 971 KB …
Can you help me build a team?
@frozzy wrote: image750×1334 611 KB …
Read More
Menu