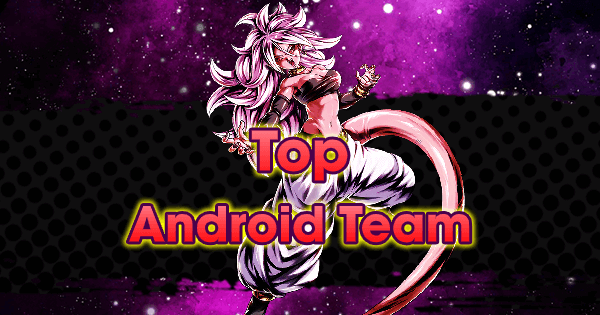 Androids have been flat out the best Team in the game at some point during the 4th quarter of last year, thanks to their high synergy and Color diversity, but they’ve steadily fallen out of the Meta due to not having a clear staple that safeguarded them from powercreep. Also, some of the Team’s best Fighters - SP Fused #13 RED, SP Perfect Cell YEL - have always had trouble fitting in with the Blast-oriented majority of the Tag.

Flash forward to some months later, Androids are now a Strike-based Team with a nightmarish monster as its staple. It only took one update to make the Team top tier again, as its synergistic foundation was prime for exploitation by a new deadly arrival.

The Team functions really well, thanks to having answers against every match-up, including against the troublesome Regeneration Tag, thanks to SP Majin #21 PUR. She ushered in a new standard of top tier Offensive power. Her immense strength is what allows this Team to break through Regeneration's shield of bulk.

Most of the time, the 21-21 duo will be the way to go, though against Regeneration other compositions are arguably superior, since SP Android #21 BLU just gets countered hard by its best Fighters. Against SP SSJ Youth Gohan YEL and his terrifying Sagas Warriors Team,  SP Fused #13 RED shines as a Defensive pivot with incredible Crisis utility. If the mirror match, or any match where enemy Purples are set to be a problem rear their head, SP Perfect Cell YEL can carry the rest of the Team. If enemy Tags appear that attempt to counter Android's Offense with Defensive Blue Fighters like SP Super Baby 2 BLU or SP SSB Goku BLU, SP Android #14 GRN can shred through them.

This Tag excels because of its incredible toolbox of Fighters that can adapt to any situation; its synergy and versatility are simply unmatched.

While she doesn't Buff Androids until 14*, she synergizes well with the Female Warriors on this Team, which translates in a Team with really high Damage output. Her Synergy with both of the 21 variants allows for a Team comp with absurd tempo and even high Defense.

He’s still a really good Blast-focused Fighter, but because of that he’s a poor fit for this Team right now. However, if for some reason you feel the need to play Blast-Androids at this point in time, he’s a good choice.

He’s ok, mostly because of his Defense and his straight up annoying Ultimate Move, but in a Strike Meta such as the one we’re in right now, his Blast Attack barrier is not as effective, and his Damage is basically null in a Strike-focused Team

He’s still Effective Defensively, but his situational Offense is inexcusable at this point. He’s a decent fit for Blast-Androids, but as explained previously you really don’t want that in your life right now.

This underrated Support Fighter is arguably a greater boon to SP Android #21: Evil PUR than her ostensibly human-looking counterpart is. #14 provides permanent, +30% Inflicted Damage Buffs to all his Android brethren, and can even deal significant Damage himself. Plus, as an Extreme Fighter and an Android Sagas Warrior, his Equipment selection is unbelievable.

Raditz
18-0 in both LBRs, top 1k in PVP ever since they started giving CC out for it, immune to anecdotal evidence, 250 pound bench press for reps