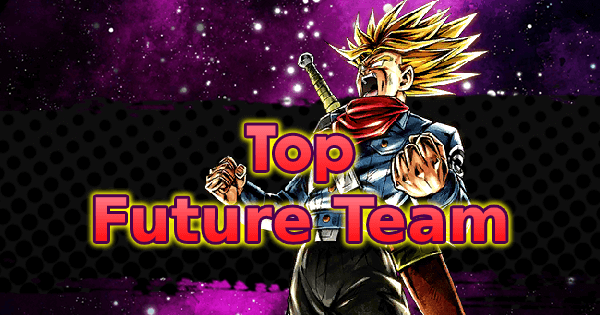 The 2nd Anniversary completely changed the Core of this Team, with SP SSB Vegeta GRN and SP SSR Goku Black RED being the only survivors. Future now has a great Ability Bonus Synergy and multiple Top Tier Fighters, let’s see how well they work together.

SP SSB Vegito BLU is without a doubt the ace of this Team, so the Fighter that should decisively impact most Matches for the better. He’s mainly able to do so through his Ultimate Move that can go through basically everything, but generally he’s able to force opponents to make rushed decisions due to how good he is at generating high value Offense from nowhere. This sole fact makes it very easy for his allies to simply take advantage of these beneficial situations.

SP SSJ Rage Trunks YEL is this Team’s Main Tank, although his Cover should be still used carefully as there are a lot of ways to go through Damage Reduction nowadays. Regardless, he’s a very Effective Damage mitigator and his sub count mechanic makes it nigh impossible for Purple Fighters to score a kill with Rising Rush while he’s alive. He works well as a Support too and he can provide very high Damage in some instances.

SP Merged Zamasu PUR and SP SSB Vegeta GRN are the “finishers” of this Team, both have insane Damage Bursts, with the former being more complete due to his durability and the latter being more Effective Offensively thanks to how he can corner SP SSB Vegito BLU with his Ultimate Move. Either of them or even both can be brought in a Match to make this Team a big Offensive threat. There is also SP SSR Goku Black RED, but he’s more situational since his toolkit is aging, so he only should preferred to one of his Teammates against matchups that include SP Kid Goku YEL.

Overall, Future is one of the best and most diverse Teams in the Game.

Gohan becomes better thanks to a Blast based Trunks being on the Core, so he can be used as an alternative to SP SSB Vegeta GRN, although his fragility is really apparent these days and he only starts inflicting high Damage once his allies get defeated.

His synergy with multiple Fighters on this Team just isn't there, but at least he's able to Support his Vegeta Family comrades well and he's still capable of inflicting high Damage when Transformed.

While this Fighter is definitely showing his age at this point in the game's lifespan, his Death Buffs, which turn all of his allies into peerless Crisis Fighters, are not to be underestimated.