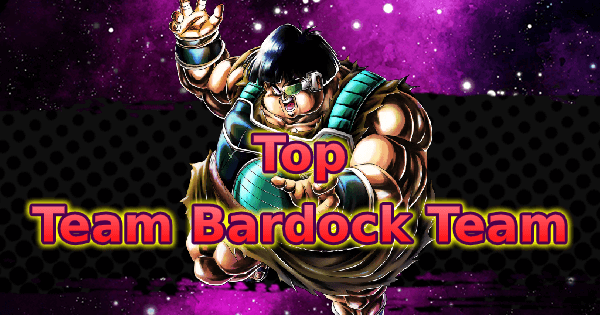 EX Shugesh YEL doesn’t fill a defined function on this Team, but he does have some merited utility. Shugesh can force foes out of the battlefield with his Special Move Arts and significantly increase his own Offenses. With his Extra Arts Card and Death Buffs, he’s even able to Support his comrades.

On this Team, EX Borgos GRN is a superb Defensive pivot with minor Crisis utility. His Cover Change Sustained Damage Cut and his Team-wide Heal effects let him keep his comrades healthy, and if one falls, he is able to bulldoze through opponents with an innate Damage Inflicted Buff.

After Borgos is defeated, he grants his Teammates a parting gift of Damage, Health, and Ki Recovery, so he’s a decent sacrifice at the altar of the Rising Rush.

SP Bardock RED is this Team’s focal point - its reason for existing at all. Bardock functions as the strongest Last Man Standing Fighter in the Meta with his incredible Damage, Defensive Utility, and a ludicrous suite of Crisis Buffs. He can even negates Color Disadvantage, turning comebacks into simple affairs.

The Rebellion From Evil Step-up gave rise to a brand new Team, the Team Bardock Tag Team. This Tag’s virtue comes from its synergy with its strongest Fighter, SP Bardock RED, who can become an absolute monster in the right conditions. This Team might be limited, but its internal synergy is off the charts.

EX Borgos GRN is this Team’s primary Defensive Pivot and a conditional Damage dealer. He can both Defend and Heal his comrades, which makes him essential for late-game play. He is protected by EX Shugesh YEL, an unconventional Offensive pivot with high Damage potential and a fantastic suite of Death Buffs. In fact, both of these Fighters Buff their Allies on Death, which is exactly what the third member of the composition needs.

That third Fighter is SP Bardock RED, the ultimate Crisis Fighter. This Team relies heavily on Bardock to carry its Damage output and late-game scaling, so the other two Fighters must be prepped to take Rising Rushes or high-damage Combos.

Bardock’s power after his two comrades falls is so incredible that there’s nothing that can stop him, aside from Buff Removal. The Team's optimal Bench is designed to cater to Bardock's strengths, hence the inclusion of Zenkai 1 SP SSJ Goku RED, who significantly Buffs all of Bardock's stats.

This Team’s main weakness is its lack of Core options. Bardock is the only Core Fighter of the three that could be considered incredible, and Shugesh simply cannot compete with other Tag Teams’ Yellow options. The lack of versatility, too, contributes to its overall weakness. This deficiency leads to problems in certain match-ups, specifically those that have powerful Red Fighters of their own.

This Bardock variant is among the oldest Fighters in the game, and is frankly completely outdated. He can be used in place of EX Borgos GRN in a pinch, but doing so is hardly recommended.