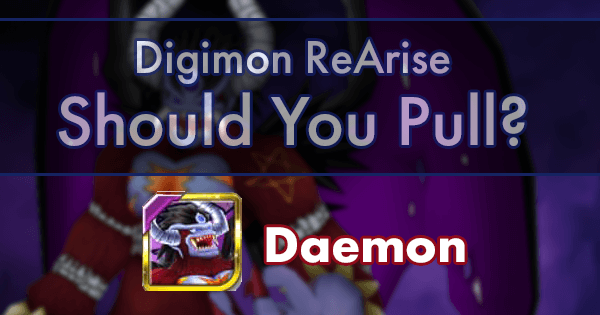 Should You Pull? - Daemon

Top tier stats by Global’s standards. Just put him beside WarGreymon and you will see that they tie in Speed and Daemon outshine WarGreymon in everything else.

Good immunity passive but unfortunately only for Deft allies.

This unique stacking PWR buff STACKS with regular PWR buff from other Digimon such as Lilamon, BlackMetalGreymon etc.

Again the perfect ability for Daemon, read on and you will know why.

Time to put together Daemon’s kit. As a Counter Tank DPS, he gets:

Can you see the synergy within Daemon’s kit? Absolutely Perfect.

The only thing he lacks is DEF buff which you can easily get from HiAndromon/Mamemon.

Yes, you should pull for Daemon. So much so it makes me feel bad for telling people to pull for MetalGarurumon.

In JP, Daemon is released about 6 months after the game's initial release. I had no idea that Bandai will bring him forward so early into Global version. Bringing him 1 to 2 months early would have given Daemon a good chance to shine but 3 weeks into Global release? This literally turn the Global power curve upside down.

I hate to be honest but if you don’t have Daemon, prepare to suffer in PvP. You would know from the A rank promotion battle that Daemon is not easy to deal with. Now you have to face him in almost every PvP battle. There is not even one Digimon currently available in the game that will help you against Daemon.

Thanks, Bandai/s for giving birth to a monster that will terrorize everyone’s PvP experience.

The reason Daemon is not S tier in PvE because he only has 1 damaging skill and countering takes up time in Raids. Hence, over 5 minutes, your Daemon will be wasting a lot of time for countering animation and reduce your team’s overall DPS.

One last reminder, Daemon is NOT guaranteed in the Step Up summon and he shares the featured rate with Piedmon (somewhat decent) and 3 trolls (Puppetmon, MetalSeadramon, Machinedramon). May RNG be in your favor. Thank you all for reading.