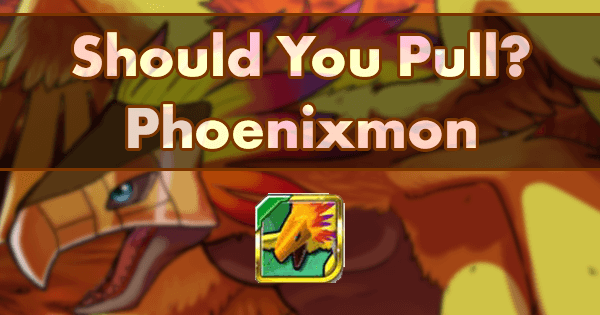 HP is good while DEF is kinda low, which makes it average. DEF is more important for a Devoted Digimon because you can get up to 1000 HP extra from Devoted Special Plugins.

TEC is meh but it doesn’t matter since Phoenixmon is not a DPS.

12 SPEED hurts. So if you are using Phoenixmon, you are accepting you are going second in a  PvP battle and will try to win by outlasting your opponents.

Among other healers though, Phoenixmon has the best stats for now.

20% Block rate is negligible. However, if you have some Block rate special plugins, once the value stack up to > 70%, It can be clutch in winning you fights.

Burn immunity to self is whatever. Clearly for flavor reasons.

70% HP heal to 3 targets is a very good heal. It has a good balance between amount healed and number of targets healed (more healed targets = longer heal cooldown).

Phoenixmon is in quite a weird spot whereby healers are generally not needed in fights currently in Digimon ReArise.

Content in PvE are not hard enough to warrant pulling for Phoenixmon. If you need a healer, MagnaAngemon (which you probably have) is equally good and sometimes even better than Phoenixmon depending on your team.

Meanwhile in PvP, Phoenixmon suffers from lack of good teammates and domination of Deft type Digimons.

Phoenixmon does not heal itself so she has a risk of dying without doing anything. During auto battle, if her HP drops below 50%, it will still trigger the heal.

Although her value increase in the future, better healers will be released as well so Phoenixmon will have some serious competition.