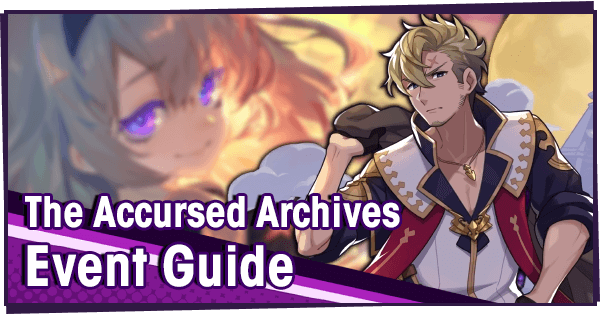 The Accursed Archives is a Facility event featuring a new story, a short series of quests, a Boss Battle, and a Challenge Battle that pits players against waves of enemies! Rewards include a new 5★ Wyrmprint, a brand new building for the Halidom, and plenty of Mana, Rupies and other goodies.

There are several story maps to be played culminating in a Boss Battle and Challenge Battle. While the regular quests are easy to clear, the Challenge Battle (particularly on Master difficulty) requires some finesse and strategy to overcome.

Each material has a different rarity. Forbidden Knowledge is the basic token for a continuous rewards track, while the other three currencies are exchanged in the Treasure Trade.

The Library Obscura is the first Shadow Facility added to the game. Use it to boost the HP and Strength of Shadow Adventurers. Arcane Tomes will be used to build it, so for those short on time, it may be worth saving up to build it after the Event.

7,816 Arcane Tomes are needed to build a Level 30 Library Obscura.

Up to five copies can be bought and earned through the event, for a grand total of +25% Skill Damage. For those who missed Plunder Pals, this is a solid Wyrmprint that, in terms of magnitude, competes with premium Gacha pulls such as Valiant Crown and Heralds of Hinomoto.

Items to target in the Trade will be limited materials such as Twinkling Sand, Champion’s Testament, Knight’s Testament, and the Damascus Crystal. Aiming to buy the Steel Brick and Crimson Cores is also worthwhile, as is the Mana (or whichever resource is in short supply).

This is a tough one: Between the plants, eyeflies, charge attacks, and boss, it’s a highly chaotic and dense battle resembling the worst Imperial Onslaughts.

For those struggling for the beginning of the event, it may be worth delaying victory to build the Library Obscura to at least level 25. Doing so gives massive bonus damage during the event (up to 150% at level 30!) making it much easier to build a high-Strength character who can knock out peskier foes. In the meantime, bonus points are awarded both for clearing each wave and having a lower time on the clock, so it’s okay to be wiped by the final wave.

As far as selecting a team, AoE damage and mobility are both extremely helpful here, making Ieyasu, Orion, Sazanka, and Curran prime choices. Most important is to mind the spawning areas of each wave in order to hit the group before it has a chance to scatter.

The first wave will be a dense group of Yellow Shrooms and Pots of Slime spawning in the center of the map. They don't have a lot of HP, so can be cleared easily with a well-placed Force Strike.

In the upper-left are numerous Spark Hounds and Shining Raptors. Their attacks all cause knockback, so this round gets chaotic; for best results, avoid attacking these head-on.

This wave brings Yellow Shrooms accompanied by Bright Eyeflies. They spawn right in the hazard zone near Paralysis-inflicting plants, making this wave a tricky one. Paralysis immunity will help immensely, especially since the Affliction locks players out of Dragon Shapeshifting.

A Shiny Troll, Spark Hound, and Bright Eyefly group forms an arrow shape near the center of the map. Hitting them all at once is somewhat of a lost cause, but aiming for the tip of the arrow can help with getting to the enemies before they reach the paralysis zone around the edges.

The Hefty Runic Treant spawns here alongside some Shiny Trolls and Bright Eyeflies. Later, some Spark Slimes and Shining Raptors appear in the lower-left, but the boss should remain the focus.

Another thing that can help immensely on Challenge Battles is a friend's Helper Skill. Healers are especially good, but AoE damage can also be timed around new enemy waves to clear the field. See here for more on setting a Helper and choosing assists from the Friend List.