With Energy, Skill Shift and additional Skill Damage, Annelie has it all. The HP condition for her Skill Damage is tricky, but also give her access to a higher magnitude of power than Halloween Elisanne. 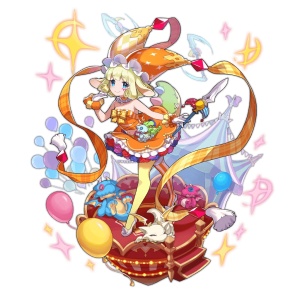 Annelie is a 5★ Light-attuned Lance user, famous for her circus trickery and friendship with Liger. As a unit, she is an all-rounder boasting great damage, team support and defensive merits through her co-ability. Annelie is comparable to fellow 5★ Light Lance user Halloween Elisanne, boasting comparable damage, and identical co-abilities. Annelie's Poison Resistance is what separates her from Halloween Elisanne, giving her the edge in Imperial Onslaught as well as certain raids, facility events and void battles.

Annelie is among the strongest Light-attuned Adventurers. Although she's not quite as powerful as Odetta or Albert, she compensates with her energy mechanic and useful co-ability.

Lots of potential with Energy.

Annelie is one of the better Adventurers who can use the Energy system, as both her skills raise her own Energy level. When teamed up with allies such as Lucretia, Vixel or other Annelie, her potential explodes. Annelie's Energized: Strength 20% passive can be activated much more more often with more energy-giving adventurers.

Annelie can support her team with Stun and Energy. Although small, these effects can be useful in certain pieces of content (for instance, her Stun is very valuable during Void Battles).

Suffers from lots of competition.

Annelie is overshadowed by Albert and Odetta, both who pack Poison Resistance and more raw damage. Odetta in particular is notable, since she can heal, buff allies' attack, and even debuff enemy defense.

Because of how many effects they have, Annelie's skills have long charge times. her Smiles on Parade skill is extremely expensive compared to regular secondary skills, and even her first suffers from increased cost.

Pair 1: Annelie's optimal setup that boosts Strength and Skill Damage, and gives some added Critical Rate and Skill Prep. Bonds Between Worlds is not a permanently available Wyrmprint, but it can be replaced with Crystalian Envoy or Astounding Trick if either is owned.

Pair 2: Better when Annelie needs some defensive power, and sacrifices only a small amount of damage. It's great for situations where a little added bulk is appreciated, such as Astral Raids or Nightmare difficulty content.

Pair 3: A good option when teamed with a defensive buffer such as Ryozen, or equipped/teamed with Pop-Star Siren.