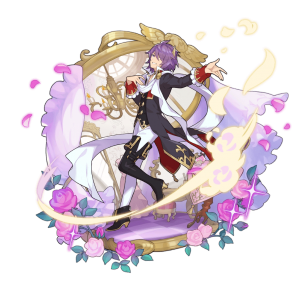 The Beauty in Motion showcase transforms Zardin from a nameless understudy to Dragalia’s first 5★ Light Blade user. His weapon class enables robust neutral damage while his kit accords him the fastest Energy stacking in the game. Tragically, B!Zardin comes late to the party, facing fierce competition for a home in Shadow IO. Though powerful in his own right, B!Zardin struggles to make a name for himself among a well-established Light roster.

B!Zardin contributes to the Stun chain alongside Annelie and Fritz, an Affliction the Imperial Onslaught boss is highly susceptible to. Blade range and Poison immunity mitigate the ubiquitous chip damage that typically destroys melee Adventurers.

B! Zardin is more than capable of Energizing himself, making Energy-compatible teammates gratuitous.

Struggles To Stand Out

Cupid: Pure 60% STR is the prime choice for consistent DPS.

Gilgamesh: Grants both power and survivability.

Takemikazuchi: Overdrive Punisher makes up for the lower STR boost.

The Heroes Arrive embraces his Shadow IO role, and Heralds of Hinomoto can be flexed with any Skill Damage option.